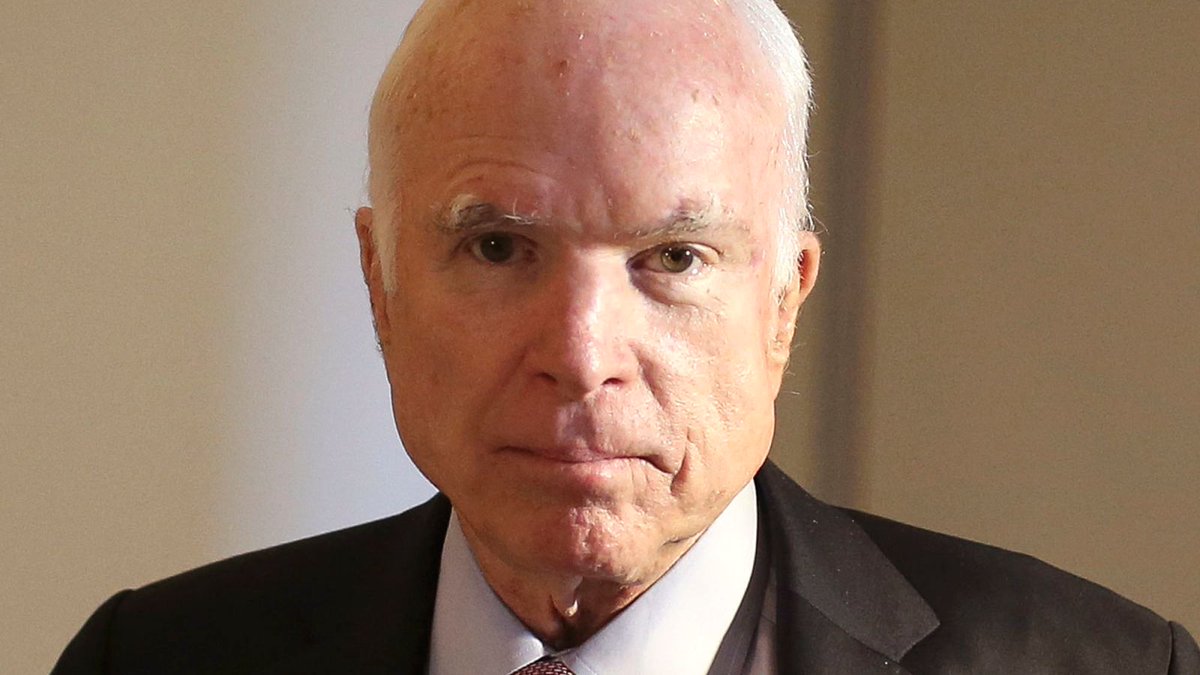 John McCain single-handedly blocked declassification of information on POWs and MIAs that the whole House and other Senators supported. Why? He needed his records of collaboration and special treatment in Hanoi kept secret forever. Blocking legislation before 4:00, Stories about "Songbird" after 4:00 min. Video statements of various participants.
https://www.youtube.com/watch?v=vFM1xqqTX_g&feature=youtu.be

This recording of John McCain making a prisoner propaganda statement for North Vietnamese radio in 1969 became public due to being misfiled, released by accident.
https://www.youtube.com/watch?v=7tkBiFZBix0&feature=youtu.be

Former presidents Bush-2 and Obama will say nice things about John McCain, who made a special point of excluding the current president from coming to his funeral. Do you recall the speaker of the words below ever saying anything truthful? Just askin'
George W. Bush, to whom McCain lost the 2000 GOP nomination, said "John McCain was a man of deep conviction and a patriot of the highest order."
https://www.zerohedge.com/news/2018-08-26/mccain-will-lie-state-capitol-barack-obama-george-w-bush-deliver-eulogies

"Feeling's mutual..."  In a report that is likely to provoke further scrutiny of the tense relationship between the president and the late Senator John McCain - to put it mildly - the Washington Post reports that President Trump rejected issuing a statement that "praised the heroism and life of Sen. John McCain", instead telling White House aides he preferred to issue a tweet before posting one Saturday night that did not include any praise for the late Arizona Republican. Trump told aides he wanted to post a brief tweet instead, and the statement praising McCain’s life was not released:  "My deepest sympathies and respect go out to the family of Senator John McCain. Our hearts and prayers are with you!" Trump posted Saturday evening shortly after McCain’s death was announced.
“It’s atrocious,” Mark Corallo, a former spokesman for Trump’s legal team and a longtime Republican strategist, said of Trump’s reaction to McCain’s death. “At a time like this, you would expect more of an American president when you’re talking about the passing of a true American hero.”

​McCain pushed for wars of aggression on 13 countries in his career, and usually got his way. This does not include North Vietnam, where he killed civilians himself, by dropping bombs on them, until he was shot down​.
https://www.zerohedge.com/news/2018-08-26/heres-map-all-countries-late-john-mccain-wanted-attack#comment-12260784

Syria:
There are signs that al-Qaeda in Syria and similar groups will try to preempt the upcoming attack on them by an offense of their own. The U.S., UK and France prepare for another chemical incident in support of the Jihadi attack. They would strike Syrian government forces and institutions after a new fake incident would be attributed to the Syrian government...
Abu Jihad John Bolton warned that any use of chemical weapons by the Syrian government would be responded to with force:
"We are obviously concerned about the possibility that Assad may use chemical weapons again.
"Just so there's no confusion here, if the Syrian regime uses chemical weapons we will respond very strongly and they really ought to think about this a long time," [Bolton] added.
This was obviously an invitation to the terrorists to stage a fake chemical weapon attack as they had done earlier in east-Ghouta and other places. Those incidences were blamed on the Syrian government without any evidence and led to U.S. strikes on Syrian forces.
In preparation for the general attack on Idleb the Russian Navy is building up a strong force in the eastern Mediterranean which includes several frigates with Calibr cruise missiles:
There is an obvious build up on all sides for a large battle over Idleb province. No plans on how the battle will proceed have been published. The number of forces assembled will make sure that it will be the biggest battle the war on Syria has seen so far.
http://www.moonofalabama.org/2018/08/syria-sitrep-the-build-up-for-the-idleb-campaign.html

North Korea:
It is more likely that Trump is punting here because there is no way he can get North Korea to denuclearize before signing an official peace agreement with it. Signing a peace agreement is not what the U.S. wants. With Korea at peace and on the way to re-unification, the U.S. would lose the justification for keeping U.S.troops in South Korea, its only major foothold on the east-Asian continent.
This position - denuclearization as precondition for talks about a peace agreement - has long been held by Secretary of State Pompeo. It is  in contradiction to the Singapore Statement Trump and Kim Jong-un signed. The Statement included (twice) a sequence of three steps:
​"​
President Trump and Chairman Kim Jong Un state the following:
The United States and the DPRK commit to establish new US-DPRK relations in accordance with the desire of the peoples of the two countries for peace and prosperity.
The United States and DPRK will join their efforts to build a lasting and stable peace regime on the Korean Peninsula.
Reaffirming the April 27, 2018 Panmunjom Declaration, the DPRK commits to work toward complete denuclearization of the Korean Peninsula
​"​

Even hawkish Korea analysts agree that this sequencing was the new, unprecedented core of the agreement:
For the first time in the history of negotiations, Washington essentially accepted, whether blindly or wittingly, Pyongyang’s wish list on sequencing: 1) normalization of bilateral relations, 2) establishment of a peace regime on the Korean Peninsula, and then 3) “complete denuclearization.”
http://www.moonofalabama.org/2018/08/trump-ties-north-korea-talks-to-trade-deal-with-china.html#more

Charles Hugh Smith explains why everything is more expensive and crapified. The "Neofeudal extortion" mechanisms are just a bunch of added fees, wherever they can be inserted, in the making of  every product and service. Being a properly positioned parasite to skim wealth flows is where it is at.
https://www.oftwominds.com/blogaug18/neofeudal-economy8-18.html

Oh No! Globalization, itself may be threatened, according to Bank for International Settlements Chief.
However, as the general manager of the Bank of International Settlements, Agustin Carstens warned, the greater risk is not how many points of GDP the rising tariffs will subtract from the US and China, but the growing danger to globalization itself, and on Saturday, Karstens delivered a scathing critique of rising protectionism, a not-so-subtle rebuke to Trump’s use of tariffs and trade talks to wring concessions from China, Mexico and many other countries.
https://www.zerohedge.com/news/2018-08-26/bis-warns-perfect-storm-global-economy

Water crises are already "here", just maybe not my "here" yet. We are particularly fortunate in North America, though California and the Ogalala Aquifer are exhausting quickly.
https://www.esquire.com/news-politics/a22627850/global-water-crisis/

Mostly Water
Posted by John Day at 6:35 AM