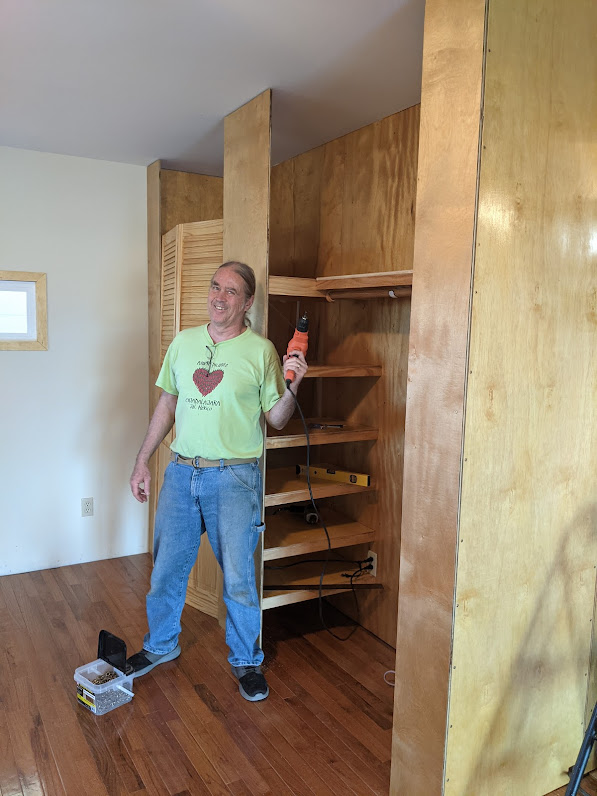 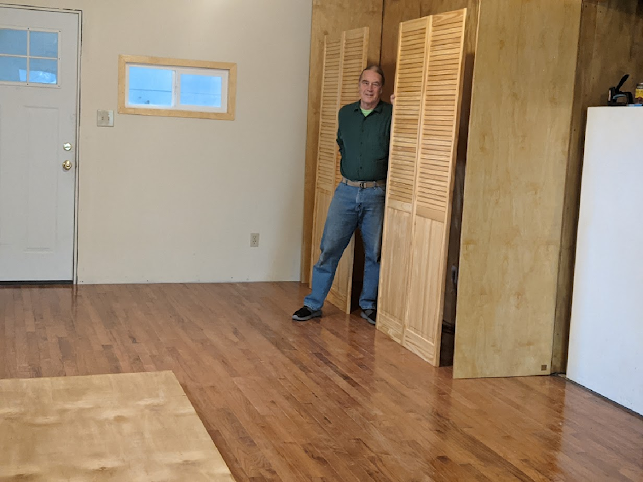 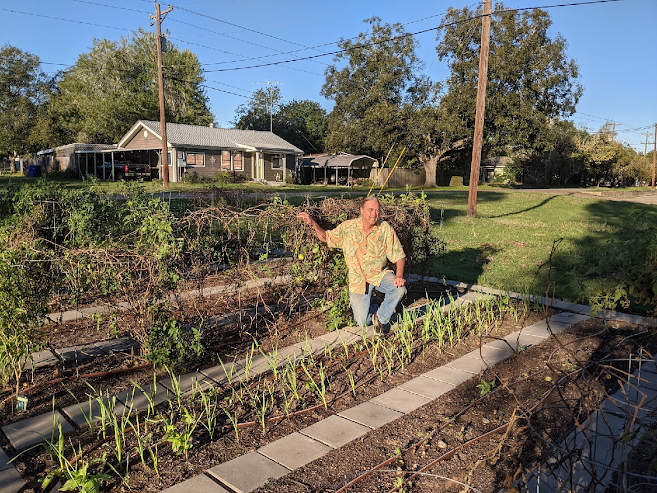 People have various thoughts about there being so many people on earth, and exceeding the long-term carrying capacity for humans.
Nobody wants to volunteer to die.
Some people put the question off by claiming that it is not a real problem for one reason or another. There are support groups for these various non-problem scenario beliefs.
Some people find group-support around picking one particular threat, such as global-warming, and working on that to the exclusion of other threats, such as running out of diesel fuel for the trains and trucks that bring us our food, or heating fuel, or electricity.
Some people put their efforts towards global population reduction. Bill Gates advocated for that as early as the late 1990s, and liked vaccines as a means of fertility reduction in the early 2000s, along with social improvements like education for women, modern careers and good health care for children.
A common meme is that we humans have been bad and dirty, and should be ashamed for what we have done to the earth.
The upshot of that usually seems to be that we should buy solar-panels, a Prius or a Tesla, so I suspect such shaming is a form of niche-marketing.
People personify Earth, Gaia, as our mother, and I like that, but then they feel like we are more powerful than Mom and are hurting her.
I see that, but Mom has been around so much longer than we can begin to fathom, and has been through so much catastrophic destruction, yet Mom has still given rise to more and more forms of life, including us. We have not been here very long, and we just hit adolescence. We are driving sports cars, playing with guns and we keep playing with fire.  Mom probably hopes that we will grow up, start gardening, and stop breaking so much stuff, but we show plenty of promise.
It is possible that Mom/Gaia finds adult humans seeking Divine guidance to be even more useful in her grand adaptations of planetary life. I think she provides guidance to those most receptive to it. Noah presents an archetypal example of an adult human who was extremely attuned to this kind of guidance.
Divine guidance from benevolent Gaia, or "God" could improve human survival odds against predation by our elite owners. (I'll refer to our elite owner-class as "Homo obliterans", if I may.) We may also read about animals fleeing to high ground when the waves suck out of the bay before a tsunami, while humans gawk. Mom could help us in those situations, too.
Is it bad that humans have brought fossil carbon and fossil water to the planetary surface? It might be a good thing, long term. A little too early to judge yet.
Some humans are capable of stewardship of life, as gardeners or diversified farmers. What if life-stewards preferentially survive a big cull by the owners, or a meteor strike, or a recurring micronova, ice age or flood?
Svet sent an academic update from Gaya Herrington, which puts fresh data into the updated version of the World-3 computer model, used in the 1972 Limits To Growth projections. Those projected graphic representations of how human industrial society might hit planetary limits in time. Limits of oil were already apparent in 1972. Pollution building up was also a big and obvious problem. The most recent update of The Limits To Growth was the 30 year update.
To compliment Gaya Harrington's paper, a PDF, I found this article about the paper from last year, so I can copy the graphs:   https://www.resilience.org/stories/2021-08-16/revisiting-the-limits-to-growth/
BAU is the famous "Business As Usual" graph from 1972. It has tracked our unfolding reality pretty well over the years, though births and deaths were both down a bit from projections. The resulting human population has been quite close to projections. My read of that graph has always been that industrial output looked like it peaked just before 2020. I personally think industrial output peaked in late 2018, and that made for problems in the world of finance.
BAU2 is the answer to, "What if there is really a lot more oil, gas and coal?" "Business As Usual-2" doubles the fossil fuel estimated to exist. This projection starts to diverge from BAU right around 2020, when one looks at industrial output and pollution. Pollution rises and rises in this scenario. Population rises another decade before falling, but falls harder, and is lower by 2100 than in BAU. Double the oil lets the game go for 10 more years before it crashes, but it crashes worse in a more polluted world.
SW is "Stabilized World", a world where people across the world, rich and poor alike, cooperate to use less energy, make less plastic and waste, reduce family sizes and harmonize human needs with the needs of our Mother Planet. This model does not track the reality, which we are living. We're not doing that yet.
CT is "Comprehensive Technology" scenario. This model assumes both the doubling of fossil fuels and the use of technology to decrease industrial damage to the planetary ecosphere. It is sort of like getting twice as much fuel and a bit more time to accomplish SW, a second chance, using technology, not altruism. 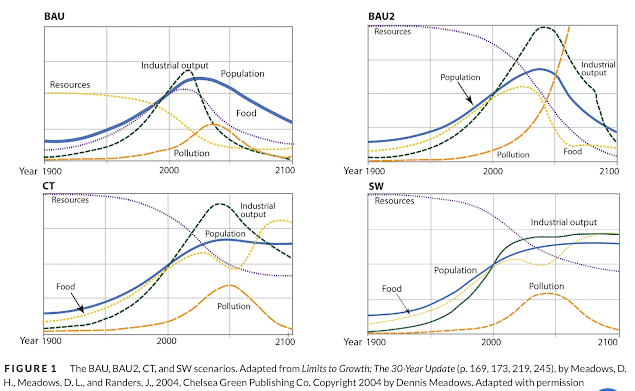 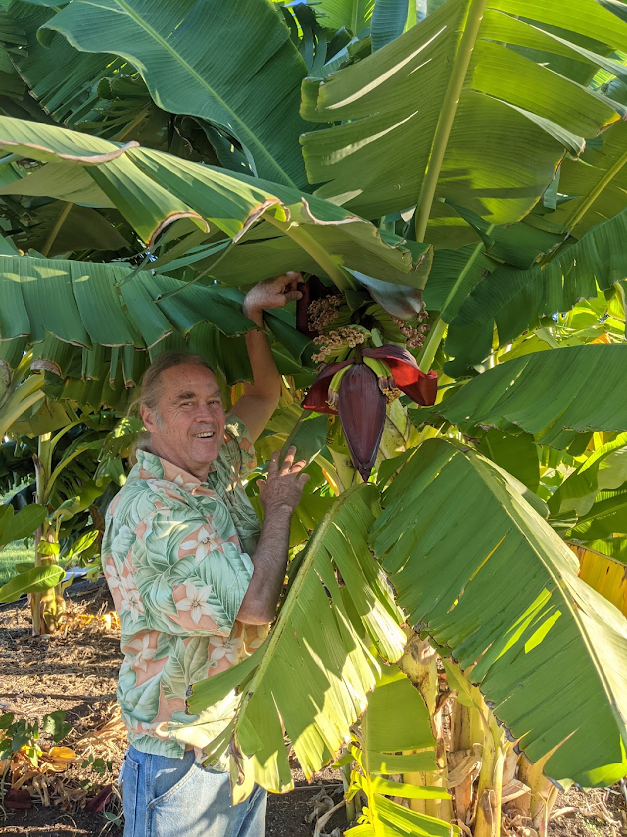 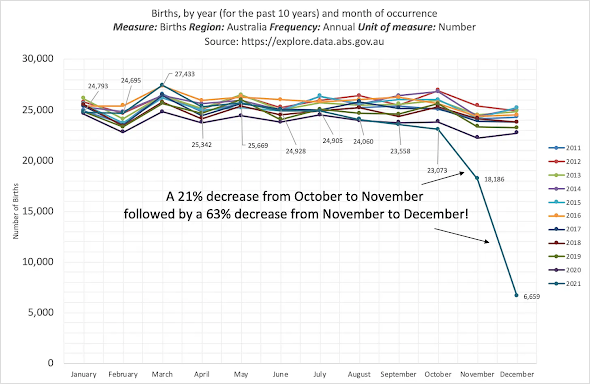 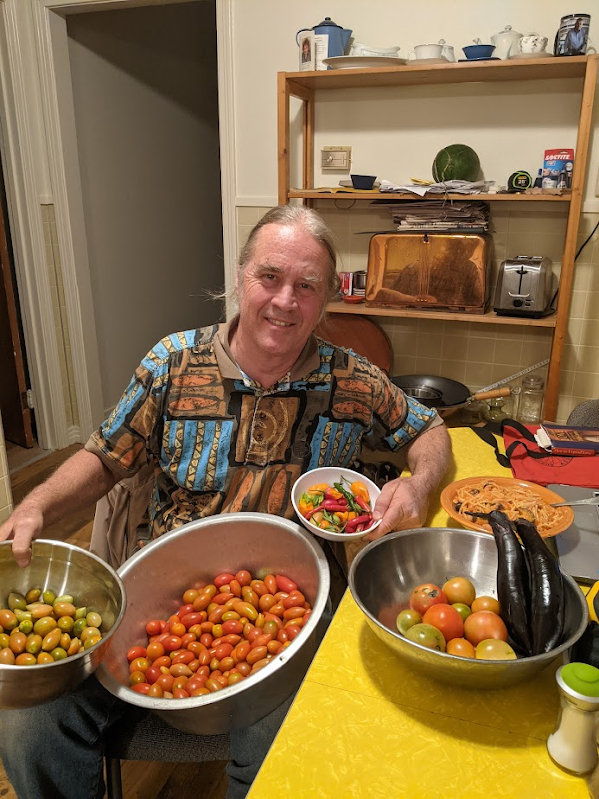