Creating The Next Economy

​Co-creators,​
This Is the End of the Cycle​,​ Charles Hugh SmithBoth new households and new businesses are in secular decline. Goosing the stock market and GDP doesn't change this reality.Everyone wants every cycle of expansion to last forever, but alas every cycle ends. The growth cycle that began in 2009 is finally coming to an end. The signs are everywhere, notwithstanding the torrid 3.2% GDP growth for the first quarter of 2019 (which as others have noted, is less than meets the eye.)Gross Domestic Product (GDP) is the standard measure of expansion, but it is an imperfect metric. GDP can still notch gains while the majority of the economy is stagnating and assets are losing value.Better guides to expansion than GDP are sales volumes, prices, profits, wage increases and sustained rises in new enterprises and households. All of these measures of expansion are stagnant, indicating that monetary and fiscal stimulus are no longer moving the needle.

Yellow Vest activists completely ignored French President Emmanuel Macron's 'olive branch' of compromises - taking to the streets of Paris and other French cities for the 25th straight weekend of protests, albeit in much smaller numbers than in previous weeks.
Yellow Vest spokesman Jérémy Clément told AFP that "the President has understood our claims, but he hasn't provided the answers to them."

Since the Treaty of Maastricht, all the members of the European Union (including the neutral countries) have placed their defences under the suzerainty of NATO, which is directed exclusively by the United States. This is why, when the Pentagon delegates the economic headquarters of the countries it wishes to destroy to the US Department of the Treasury (USDT), all members of the European Union and NATO are obliged to apply US sanctions.​..

Today, US sanctions concern at least twenty countries - Belarus, Myanmar, Burundi, North Korea, Cuba, the Russian Federation, Iraq, Lebanon, Libya, Nicaragua, the Syrian Arab Republic, the Bolivarian Republic of Venezuela, the Central African Republic (CAR), the Democratic Republic of the Congo, the Islamic Republic of Iran, Serbia, Somalia, Sudan, South Sudan, Ukraine, Yemen and Zimbabwe. That gives us a very precise map of the conflicts led by the Pentagon, assisted by the US Department of the Treasury (USDT).
https://www.voltairenet.org/article206265.html

​"Diplomacy":
U.S. Ambassador to Russia Jon Huntsman has boarded one of two U.S. Navy aircraft carriers that arrived in the Mediterranean on Tuesday to caution Moscow against its activities in Syria and around the world...
The U.S. Navy said Huntsman observed the operations of 9,000 sailors and marines, 130 aircraft and 10 ships aboard the USS Abraham Lincoln. He said the Nimitz-class USS Abraham Lincoln and the John C. Stennis each “represent 100,000 tons of international diplomacy.”
“When you have 200,000 tons of diplomacy that is cruising in the Mediterranean,” Huntsman told CNN, “this is forward-operating diplomacy — nothing else need to be said.”
https://www.themoscowtimes.com/2019/04/24/us-envoy-warns-russia-with-warship-diplomacy-a65366

​Don't forget the proposed "Fort Trump" in Poland, either!
​Netanyahu, who on Tuesday toured the Golan with his wife and sons, said a community or neighborhood on the Golan Heights should be named after US President Donald Trump in appreciation for his decision last month to recognize Israeli sovereignty over the strategic plateau.
https://www.jpost.com/Breaking-News/Netanyahu-I-will-name-a-Golan-town-after-Trump-587690

Bernie Sanders seems to support returning to the Mideast policy of Eisenhower and Kennedy.
"The US gives billions of dollars in military aid to Israel. It should deal with the Middle East on a level-playing-field basis," Bernie Sanders told CNN.
Appearing on CNN, Bernie Sanders, the Democratic nominee for the US presidency in 2020, said he supports Israel’s right to exist and considers himself pro-Israel, but doesn’t support the policies of Prime Minister Benjamin Netanyahu, who was reelected earlier this month.
https://sputniknews.com/world/201904231074371955-racist-israel-government-sanders-netanyahu/

​The timing seems ideal for Netanyahu, with his power consolidated​, to destroy future potential threats to Israel's expansionist ("lebensraum") agenda. The economic sanctions against Lebanon have weakened the economy and the people, same as Syria. They will supposedly launch a massive assault, whenever they can find where Nasrallah is. Killing Nasrallah early is critical to their success, as they see it.
Israel Plans to Launch a Surprise War against Lebanon
Hezbollah Leader: "The Possibility of a War with Israel Is Very High this Summer and I May No Longer be with You"
https://www.globalresearch.ca/israel-plans-to-launch-a-surprise-war-against-lebanon/5675484

Same faces, similar jobs, new titles, more pay... Facebook is CIA.
Facebook announced Monday that Jennifer Newstead, a Trump appointee who served in the Department of Justice (DoJ) under President Bush, will join the social media company as General Counsel, supervising its global legal functions...
In a 2002 statement, Assistant Attorney General Viet Dinh described Newstead's role in drafting the Patriot Act: "Her enhanced leadership duties and her excellent service on a range of issues — including helping craft the new U.S.A. Patriot Act to protect the United States against terror — have earned her this important distinction. She is first among equals."
Congress enacted the Patriot Act in the wake of September 11, 2001 attacks, the Act expanded the scope of the government’s surveillance powers to investigate terrorism, organized crime, and drug trafficking. It allowed government investigators to use roving wiretaps and the ability to collect telephone records from US carriers.
https://www.zerohedge.com/news/2019-04-24/she-wrote-patriot-act-her-next-job-facebook

Icelandic court orders Visa spin-off to pay Wikileaks $10 million for all those years of not paying what they were previously ordered to pay Wikileaks. They are appealing. (The US government doesn't want it paid, and Iceland can't really "trump" the empire.)
https://www.thegatewaypundit.com/2019/04/icelandic-court-orders-valitor-formerly-visa-to-pay-wikileaks-10-million-over-2011-banking-blockade/

It's no secret that the CIA wants Assange killed as an example. This is intended be a long playing lesson to anybody who would leak information of the evil which the em[ire does. "Resistance is futile".
https://www.zerohedge.com/news/2019-04-27/wikileaks-cites-evidence-us-building-capital-offense-case-against-assange

Jim took this picture of the vegetable garden in Yoakum Saturday morning. It's heating up, so I put a timer on the drip system to come on for 40 minutes at 7:00 AM every day. 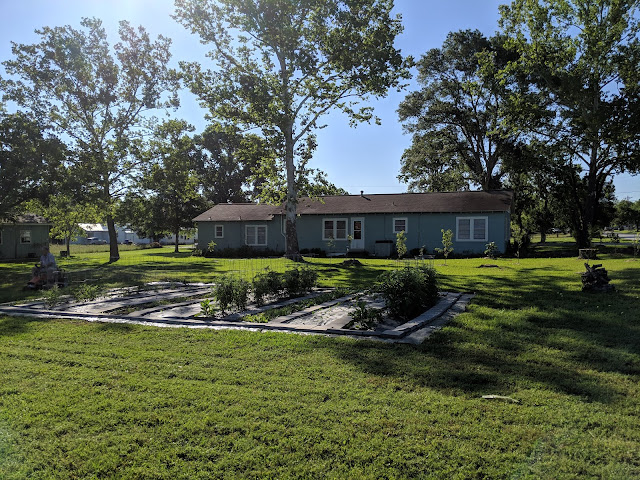