​
We Have A COVID Lifeline. The Powers Won’t Allow It.​ Mary Beth Pfeiffer​
In a widely reported announcement, the U.S. Food and Drug Administration warned, “Why You Should Not Use Ivermectin to Treat or Prevent COVID-19.”​ ...​
​  ​A website tracker summarizes those 52 ivermectin trials, involving more than 17,500 patients. Collectively, ivermectin:
–Prevented 85 percent of infections (similar to vaccines);
–Resolved 81 percent of early illness;
–Improved 43 percent of late-treated patients;
–Reduced deaths by 76 percent.
As authorities dismiss study after study, it has become clear. The drug’s rejection is not based on science, data or the experience of many doctors. Instead, a disinformation campaign is raging to demonize the drug and belittle studies that support it.
https://trialsitenews.com/we-have-a-covid-lifeline-the-powers-wont-allow-it/
Lots of information about physiologic benefits of vitamin-D here, Note that Michael Hollick MD, PhD is an author
Vitamin D and Its Potential Benefit for the COVID-19 Pandemic
​  ​Vitamin D is known not only for its importance for bone health but also for its biologic activities on many other organ systems. This is due to the presence of the vitamin D receptor in various types of cells and tissues, including the skin, skeletal muscle, adipose tissue, endocrine pancreas, immune cells, and blood vessels. Experimental studies have shown that vitamin D exerts several actions that are thought to be protective against coronavirus disease (COVID-19) infectivity and severity. These include the immunomodulatory effects on the innate and adaptive immune systems, the regulatory effects on the renin-angiotensin-aldosterone-system in the kidneys and the lungs, and the protective effects against endothelial dysfunction and thrombosis. Prior to the COVID-19 pandemic, studies have shown that vitamin D supplementation is beneficial in protecting against risk of acquiring acute respiratory viral infection and may improve outcomes in sepsis and critically ill patients. There are a growing number of data connecting COVID-19 infectivity and severity with vitamin D status, suggesting a potential benefit of vitamin D supplementation for primary prevention or as an adjunctive treatment of COVID-19. Although the results from most ongoing randomized clinical trials aiming to prove the benefit of vitamin D supplementation for these purposes are still pending, there is no downside to increasing vitamin D intake and having sensible sunlight exposure to maintain serum 25-hydroxyvitamin D at a level of least 30 ng/mL (75 nmol/L) and preferably 40 to 60 ng/mL (100-150 nmol/L) to minimize the risk of COVID-19 infection and its severity.
https://pubmed.ncbi.nlm.nih.gov/33744444/#:~:text=Prior%20to%20the%20COVID%2D19,sepsis%20and%20critically%20ill%20
​The (16 page) 2007 Vitamin-D paper by Dr Hollick that really got me interested in Vitamin-D, testing and treating patients for deficiency.
(I did discover that I needed much higher doses than he lists in the paper, and the journal article above also uses much higher doses. I don't know why, but I need 5000 units per day for several months to get most people up into the normal range, twice that if they are obese.)
Vitamin D Deficiency​, ​Michael F. Holick, M.D., Ph.D.
​https://www.nejm.org/doi/pdf/10.1056/nejmra070553
Truth Over Fear, COVID-19 and The Great Reset, free registration, April 30 to May 2 (Fri, Sat, Sun)
Look at the quality of these participants. Dr McCullough, who is one of the presenters, sent this.
https://www.restoretheculture.com/?r_done=1
Cheap, safe Nitric Oxide nasal spray clears SARS-CoV-2 from nasal passages (in early infections where that's where it still is)
https://www.globalresearch.ca/clinical-trial-confirms-breakthrough-treatment-covid-19/5743173

Isreali Health Body Report On COVID Vax ‘Deadly’ Impacts    Thanks Jeremy
The Israeli People Committee (IPC), a civilian body made of leading Israeli health experts, has published its April report into the Pfizer vaccine’s side effects.* The findings are catastrophic on every possible level.
Their verdict is that “there has never been a vaccine that has harmed as many people.”  The report is long and detailed. I will outline just some of the most devastating findings presented in the report.
“We received 288 death reports in proximity to vaccination (90% up to 10 days after the vaccination), 64% of those were men.” Yet the report states, “according to data provided by the Ministry of Health, only 45 deaths in Israel were vaccine related.” If the numbers above are sincere then Israel, which claimed to conduct a world experiment, failed to genuinely report on its experiment’s results.
We often hear about blood clots caused by the AstraZeneca vaccine. For instance, we learned this morning about 300 cases of blood clots in of Europe. However, if the IPC’s findings are genuine, then in Israel alone the Pfizer vaccine may be associated with more deaths than AstraZeneca’s in the whole of Europe.
https://principia-scientific.com/isreali-health-body-report-on-covid-vax-deadly-impacts/
We can’t expect COVID-19 to go away; we should plan accordingly, Gail Tverberg , Actuary​, Thermoeconomics Analyst

​  ​In this post, I explain why, in my view, COVID-19 seems likely to become endemic, like the flu. The vaccines won’t be enough to make it go away completely. I will also look at the issue of how we should respond to the cases of COVID-19 that we will almost certainly experience in the future.
​  ​To a significant extent, what we can and should do in the future is an energy issue. If we plan to transition to a green energy future, or if we simply plan to reduce usage of fossil fuels in future years, we probably need to scale back our plans for vaccines. In fact, any treatment that would be given in today’s emergency rooms is likely to become less and less possible as energy supplies deplete.
​  ​We will need to focus more on what our bodies can do for us, and what we can do to assist them in this effort. We also need to think about what simple changes to our environment (such as windows that open) can do for the prevention of both COVID-19 and the many other communicable diseases that we can expect to encounter in the future. ​  ​https://ourfiniteworld.com/2021/04/11/we-cant-expect-covid-19-to-go-away-we-should-plan-accordingly/

​John​ ​Ward presents actual statistics about COVID-19 in India, which is doing very well, not terribly.
​  ​Unless you made an early getaway to Planet Drongo before the lockdown, you will have read pretty much everywhere that “India sees world’s highest daily cases amid oxygen shortage”. In fact, the BBC tells us that “some people” have died waiting for oxygen, the Indian health service is “completely overwhelmed” and the country now has “sixteen million cases”.So it’s a disaster, right? Well actually, no – it isn’t. The Indian health ministry has already made it clear that the Covid19 variant they’re dealing with this year has “a considerably lower death rate than the previous version”.
​  ​Go to the Worldometer site, and you’ll see that India’s deaths per million is a minute 134: that’s 7% of the US and French figures, 6% of the UK and Italy’s and the lowest by far of any country in the Top 30 for cases. Virtually no vaccination has been undertaken in India (only 1.3% are fully vaccinated) and the country is not using lockdowns. The Times of India has just denied the BBC’s ‘deaths from oxygen shortage’ fakery.
​  ​What India IS doing, however, is employing the anti-inflammatory drugs tocilizumab and itolizumab and the antivirals favipiravir and hydroxychloroquine on a very wide scale. Go to Pharma site/accolyte spaces, and you’ll see all four drugs being rubbished: the Pharmafia and their bureaucratic whores don’t want any signs of a success to get out.
​  ​But the Truth already is out there: India is doing spectacularly well without either vaccines or lockdown. You won’t find that reality expressed anywhere in the Western MSM, but the facts show that its infection management drugs have delivered one of the lowest case to death rates on the planet.
​  ​Not that you’d notice, reading  Bloomberg: (my emphases)
​  ​‘India saw the world’s biggest one-day jump in coronavirus cases ever as a ferocious new wave grips the country, overwhelming hospitals and crematoriums and prompting frantic cries for help on social media.
​  ​The South Asian nation reported 314,835 new infections Thursday, topping a peak of 314,312 recorded in the U.S. on Dec. 21. People took to Twitter and Instagram to call for everything from hospital beds to medicine and doorstep Covid-19 tests.
​  ​The grim milestone shows how the pandemic crisis has shifted firmly to the developing world, where variants and complacency are threatening containment measures and there’s a lack of vaccines, with supplies dominated by richer nations.’
​  ​It’s a pack of lies from end to end. India has a population of 1.4 billion people – so overcrowding is almost generic – and being four times more people than the US, the comparison with America is completely ludicrous. Hospitals do not get overwhelmed when 134 folks out of a million get ill. India’s water purity and basic hygiene measures are very Third World. Yet despite all that, it is doing phenomenally well against Covid….by having and doing respectively none of the advantages and policies of the West.
​  ​Sloppy journalism? No – criminally misleading journalism designed to scare as many people into vaccination as possible.
https://therealslog.com/2021/04/23/the-bbc-bloomberg-on-india-b-stands-for-bullshit/?unapproved=971931&moderation-hash=78dd3e173f2b25d3281b5ff7999d3663#comment-971931
Corruption in the Medical Establishment
Unpleasant facts​, ​Tessa Lena​ ​
​  ​This article is meant as something simple and logical that you can send to friends who still blindly trust in the American medical establishment. It’s a collection of stories and links that are not conspiratorial at all. All logical, all “respectable,” bland almost—yet demonstrating beyond any reasonable doubt that we need to watch out for ourselves.
https://tessa.substack.com/p/medical-corruption
​We all lived at Camp Lejeune , North Carolina, which had the biggest TCE contamination of the drinking water of anywhere, but we didn't know it. We drank it and swam laps and laps and laps in it. My Dad got Parkinson's disease, and he died in early 2018, and we are just hearing about this.
Rates of Parkinson’s disease are exploding. A common chemical may be to blame
​  Dorsey, a neurologist at the University of Rochester Medical Center and author of Ending Parkinson’s Disease, believes a Parkinson’s epidemic is on the horizon. Parkinson’s is already the fastest-growing neurological disorder in the world; in the US, the number of people with Parkinson’s has increased 35% the last 10 years, says Dorsey, and “We think over the next 25 years it will double again.”
Most cases of Parkinson’s disease are considered idiopathic – they lack a clear cause. Yet researchers increasingly believe that one factor is environmental exposure to trichloroethylene (TCE), a chemical compound used in industrial degreasing, dry-cleaning and household products such as some shoe polishes and carpet cleaners.
https://www.theguardian.com/commentisfree/2021/apr/07/rates-of-parkinsons-disease-are-exploding-a-common-chemical-may-be-to-blame
41.000 years ago the earth's poles reversed, and a lot of big animals got wiped out by the increase in cosmic and solar radiation from the vastly diminished Van Allen Belt protection. Humans did red-ochre (ie. sunscreen) cave paintings, all of a sudden...
They say this might happen again kinda' soon, but nobody knows how soon.  Thanks (NASA guy) Mel.
Scientists link Earth's magnetic reversals to changes in planet's life and climate
The discovery of a fossilized tree in New Zealand is providing scientists with insight on how magnetic pole reversals could affect life on Earth.
https://www.pri.org/stories/2021-04-19/scientists-link-earths-magnetic-reversals-changes-planets-life-and-climate?fbclid=IwAR34kfy79ifnNMF_vWsZ9HTUB14MPCMMD35n6ilbS7cgvOOvXOaeaOXMtAg
​Sheltered
Pictured with daughter, Holly,  2 peach trees​ and drip watering system I installed Saturday at her new house 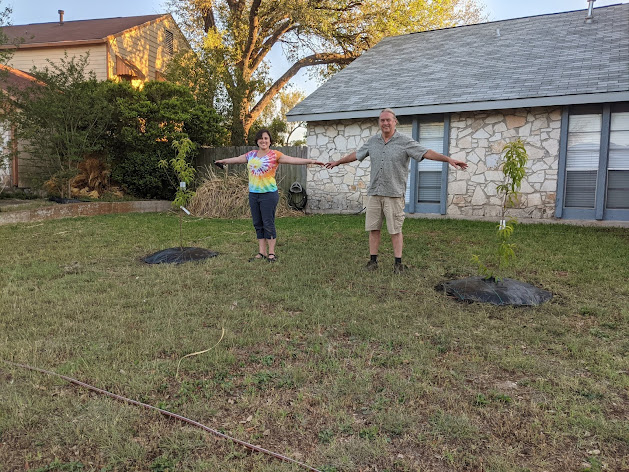