40 million Russians prepare for nuclear disaster-drill, as US looks hard at overtly attacking Syrian military positions, not just "accidentally" attacking critical positions for an hour to let ISIS overrun them.
"What about the option of controlling the airspace so that barrel bombs cannot be dropped? What do you think of that option?" asked Wicker. "Right now, Senator, for us to control all of the airspace in Syria would require us to go to war against Syria and Russia. That is a pretty fundamental decision that certainly I’m not going to make," said the Chairman of the Joint Chiefs of Staff.
http://www.zerohedge.com/news/2016-10-03/40-million-russians-take-part-radiation-disaster-drill-days-after-us-general-warns-w
http://www.globalresearch.ca/moscow-prepared-for-possible-nuclear-attack-statement-of-russian-emergency-situations-ministry-emercom/5549105

The US Central Intelligence Agency (CIA) is behind the attack on September 19, the press service of the Ministry said. And the main purpose of the air raid was an attempt to hide the “blatant attack of the US coalition forces on positions of the Syrian Army in Deir ez-Zor,” and to divert an attention of media and the world community from disapproval of this act, “which openly demonstrates support for Islamic State’s [IS] terrorists by the US.”
http://www.globalresearch.ca/the-un-humanitarian-convoy-in-aleppo-the-cia-was-behind-the-attack-syrian-defense-ministry/5548890

The Pentagon paid a British company $500 million to make fake al Qaeda videos (but they were not meant for you America, so it's all alright. Sorry for the misunderstanding. Back to work, now.)
http://www.zerohedge.com/news/2016-10-03/iraq-propaganda-videos Germany intends to send asylum seekers "back to Greece", but won't  bother  America about all those nasty wars that NATO has had to feed lately, which is what these survivors are fleeing..
http://www.keeptalkinggreece.com/2016/10/02/germany-insists-on-sending-asylum-seekers-back-to-greece/?utm_source=feedburner&utm_medium=email&utm_campaign=Feed%3A+KeepTalkingGreece+%28Keep+Talking+Greece%29

57% of Americans think there should be "a third party". (About 12% of Americans realize that there is a third, and even a fourth party, and plan to vote for one or the other of them.)
http://libertyblitzkrieg.com/2016/09/30/new-gallup-poll-shows-57-of-americans-want-a-major-3rd-party/

Pediatric Football Sacrilege in East Texas!
Middle school all-black football team of 11-12 year olds, the Beaumont Bulls "senior team", decided to "take a knee" for the national anthem, to protest that their lives were held more-expendable in this great country.
It was the kids idea, though the coaches agreed, and so did the league, at first. Now, with those little rascals still dropping a knee, and the coach suspended, and the league sorta' supporting their right to have an opinion like this, it's up to the other team to miss the game so they can't humiliate God in his temple this week.
Thanks Dan. What's the world coming to when this kind of extreme radicalism gets into junior-high football?
http://thelab.bleacherreport.com/the-fight-of-their-lives/?utm_source=narratively&utm_campaign=weekender090216&utm_medium=email&utm_term=.xdmBK2xg6 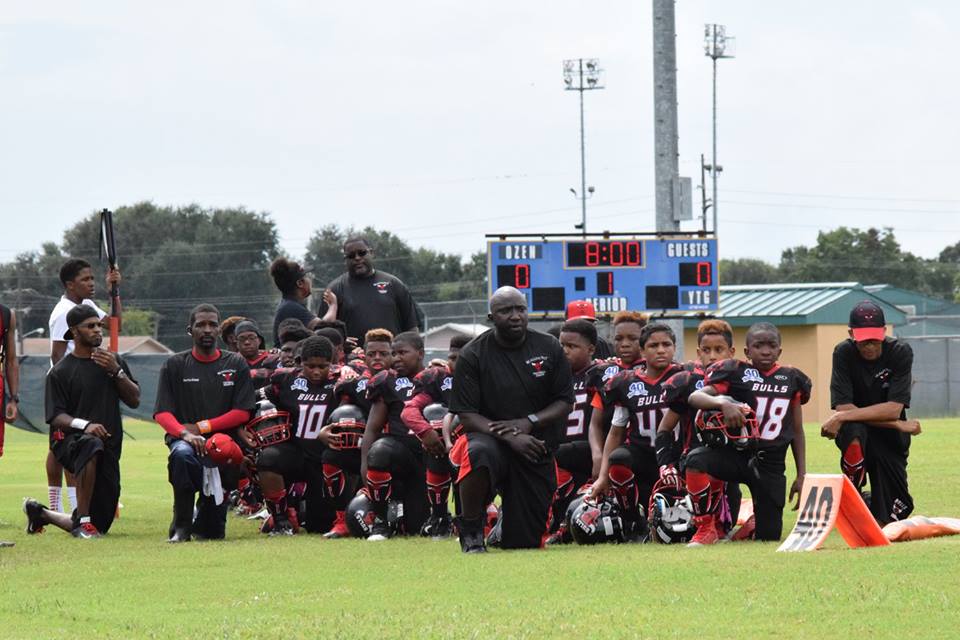