Psychic Nikki Haley: "If there is a future chemical weapons attack, Assad did it" Caitlin Johnstone
“If they want to continue to go the route of taking over Syria, they can do that,” said Nikki Haley at a UN press conference today, without explaining how a nation’s only recognized government can ‘take over’ the country it governs. “But they cannot do it with chemical weapons. They can’t do it assaulting their people. And we’re not gonna fall for it. If there are chemical weapons that are used, we know exactly who’s gonna use them.”
[I guess that makes it all clear enough.]
https://caitlinjohnstone.com/2018/09/05/psychic-nikki-haley-if-there-is-a-future-chemical-weapons-attack-assad-did-it/ 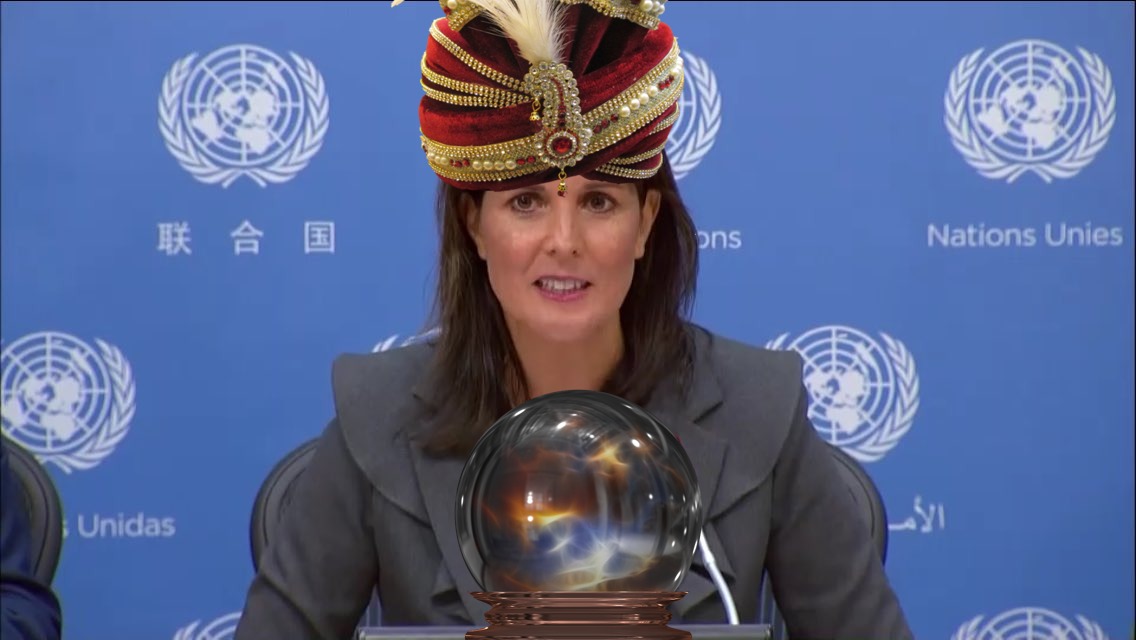 US says it has intelligence to the effect that Basher Assad MD will gas some of his own people, as soon as the Syrian army starts to win decisively in the province of Idlib, which has been taken over by moderate renamed terrorists, employed by the CIA.
The Wall Street Journal has just published a bombshell on Sunday evening as Russian and Syrian warplanes continue bombing raids over al-Qaeda held Idlib, citing unnamed US officials who claim "President Bashar al-Assad of Syria has approved the use of chlorine gas in an offensive against the country’s last major rebel stronghold."
https://www.zerohedge.com/news/2018-09-09/us-says-assad-has-approved-gas-attack-idlib-setting-stage-major-military-conflict
"Project Underpants", US plans for permanent bases in Syria to extract oil, money and favors.
Syria and its allies Russia and Iran should proceed with their plans to cleanse Idleb of terrorist. The U.S. is bluffing. It has no realistic means to prevent the operation. Any U.S. attack on Syrian and Russian forces involved in it would likely escalate into a conflict between nuclear powers. That is a risk the U.S. military is unwilling to take. It knows that the forces it planted into Syria are vulnerable to attacks.
http://www.moonofalabama.org/2018/09/syria-us-reveals-underpants-plan-for-a-permanent-occupation.html#more

​US jets attack Syrian town with banned white phosphorous bombs (which burn skin and lungs horribly when the aerosol seeks out flesh to react with chemically) Nobody wants to die like this. The world agreed long ago to never use this stuff again. Chemical weapon of mass destruction. War Crime.
The use of any incendiary munitions in populated civilian areas was banned by the 1980 Protocol III of the Convention on Certain Conventional Weapons. The US signed the protocol back in 2009.
White phosphorus, however, is also used for smoke screens and signals, which are not banned under the Convention. The loophole allows several nations, including the US, to keep the white-phosphorus based weapons in their arsenal.
​https://www.rt.com/news/438008-us-strikes-syria-white-phosphorus/

America as Diabolical False Flag Empire (nothing particularly new for over 150 years), a book review and summary.
The attacks of 11 September 2001 are the false flag fulcrum upon which his two books pivot. Their importance cannot be overestimated, not just for their inherent cruelty that resulted in thousands of innocent American deaths, but since they became the justification for the United States’ ongoing murderous campaigns termed “the war on terror” that have brought death to millions of people around the world.  An international array of expendable people.  Terrifying as they were, and were meant to be, they have many precedents, although much of this history is hidden in the shadows.  Griffin shines a bright light on them, with most of his analysis focused on the years 1850-2018.
http://edwardcurtin.com/a-diabolic-false-flag-empire-a-review-of-david-ray-griffins-the-american-trajectory-divine-or-demonic/

Exhausted Venezuelans have more to protest about in the streets, with the revelation that the US was trying to stage a coup in their country, which has weakened with a decade and a half of covert warfare, economic, political, criminal, etc.
https://www.zerohedge.com/news/2018-09-10/venezuela-hold-massive-rally-and-march-after-bombshell-revelation-us-coup-meetings

American farmers can't actually live and farm any more. It's final. They are debt slaves with double the suicide rate of Iraq War veterans. They have to strictly do precisely as they are told, but have no right to pay or benefits, being wholly-owned-debt-slave-independent-contractors. Kansas is vacant.
You’ll have to get off the land. The plows’ll go through the dooryard. …It’s not us, it’s the bank. A bank isn’t like a man. Or an owner with fifty thousand acres, he isn’t like a man either. That’s the monster.
https://www.theamericanconservative.com/articles/monster-turns-our-farmers-into-serfs-and-sharecroppers/

​North Korean Military Parade has Floats and Flowers, not Missiles (Style Points!)​
“North Korea upholds the consensus of the Singapore meeting between the leaders of North Korea and the United States and has taken steps for it and hopes the United States takes corresponding steps, to jointly promote the political resolution process for the peninsula issue,” the report paraphrased Kim as saying.
https://www.reuters.com/article/us-northkorea-anniversary-military-parad/no-long-range-missiles-north-korea-military-parade-features-floats-and-flowers-idUSKCN1LP045

Africa is not really getting bad deals from China, and some outright aid, and no regime-change pressure. Pepe Escobar has the story.
As Nick Turse extensively documented in his must-read book Tomorrow’s Battlefield, there are at least 50 US military bases Africa-wide – ranging from what AFRICOM designates as “forward operating sites” to fuzzy “cooperative security locations” or “non-enduring contingency locations.” Not to mention 36 AFRICOM bases in 24 African nations that have not previously made it to official reports.
What this spells out, once again, is further evidence of the ever-replicating Empire of Bases. And that brings us to Africa’s stark “contingency location” choice. In the ultra-high-stakes development game, who’re you gonna call? FOCAC and the New Silk Roads, or Ghostbusters AFRICOM?
http://www.atimes.com/article/its-africas-choice-africom-or-the-new-silk-roads/?utm_source=The+Daily+Report&utm_campaign=eeb97e1c24-EMAIL_CAMPAIGN_2018_09_04_01_51&utm_medium=email&utm_term=0_1f8bca137f-eeb97e1c24-31606405
Paul Craig Roberts
I know who wrote the anonymous “senior Trump official” op-ed in the New York Times. The New York Times wrote it.
The op-ed (http://www.informationclearinghouse.info/50194.htm) is an obvious forgery. As a former senior official in a presidential administration, I can state with certainty that no senior official would express disagreement anonymously. Anonymous dissent has no credibility. Moreover, the dishonor of it undermines the character of the writer. A real dissenter would use his reputation and the status of his high position to lend weight to his dissent.

​Sideways Glancing​
Posted by John Day at 11:49 AM