Farage and Gabbard, Lions of the Great Realignment, Tom Luongo
​ ​There is a realignment coming in electoral politics. It began with Ron Paul in 2008 and has been building for more than a decade. We know this story well.
​ ​That realignment will be about restoring not just national sovereignty but also personal autonomy in a world the rulers of which are desperate to clamp down their control over.​..

The original Brexit vote was that opportunity for the power elite to get it through their thick skulls that Britons didn’t want to go where the EU was headed.​..​
​Theresa May, Dominic Grieve and the rest of those in the Westminster bubble refused to accept that they no longer had control over the situation. ​ ​Theresa May like an autistic monkey keeps putting forth vote after vote to get her Withdrawal Treaty past a parliament that has no business still presiding over the country.​..​

​ Bernie Sanders and Donald Trump were the vessels for our deep dissatisfaction with the D.C. corruption. The realignment was staring us in the face in 2016.
​ ​The Davos Crowd haven’t gotten the message. And they won’t listen until we force them to.
​ ​Trump is compromised because of his vanity and his weakness. There is not much hope going into 2020 unless Tulsi Gabbard catches fire soon and begins taking out contenders one by one.

Short video of interview with Congresswoman Tulsi Gabbard stating she would pardon Snowden and Assange for doing what is right.
Tulsi clearly makes the point that the system needs to respect and protect conscientious whistle-blowers, like them and Chelsea Manning.
Tulsi exhibits no hesitation, pushing to speak on this before questions finish...
https://www.newsweek.com/tulsi-gabbard-julian-assange-edward-swowden-pardon-dropped-charges-joe-rogan-1425802

In Europe, CJ Hopkins is worried about foreign interference in upcoming EU Parliamentary elections:
​ ​So, the election-meddling Putin-Nazi disinformationists are at it again! Oh yes, while Americans have been distracted by Russiagate, Obstructiongate, Redactiongate, or whatever it’s being called at this point, here in Europe, we are purportedly being bombarded with Russian “disinformation” aimed at fomenting confusion and chaos in advance of the upcoming EU elections, which are due to take place in less than two weeks.
​ ​The New York Times reports that an entire “constellation” of social media accounts “linked to Russia and far-right groups” is disseminating extremist “disinformation,” “encouraging discord,” and “amplifying distrust in the centrist parties that have governed for decades.” These accounts share some of the same “digital fingerprints,” and are engaging in “tactics” similar to the “tactics used in previous Russian attacks,” notably the Kremlin’s notorious mass-brainwashing of millions of defenseless African Americans with those deceptive anti-masturbation memes during the 2016 elections.

http://www.unz.com/chopkins/the-disinformationists/
If this is true, what's there to worry about?
Majority of Europeans 'expect end of EU within 20 years'


Rob Hopkins advocates activating our imaginations.
(Just pull the pin and THROW IT!)
If climate change is anything, it is a failure of the imagination, the ghastly final playing out of Margaret Thatcher’s assertion that ‘There Is No Alternative’. Of course there’s an alternative, and our survival depends upon our finding it and living it. So, living at a time where our imagination is constrained and unvalued in school, at university, in our work life, our home life, is a very dangerous situation. As author Leah Stella Stephens puts it, “Who has the time or space to hear the barely audible whispers from our long-neglected imaginations? Our imaginations are banished during the day, locked in our internal jails, only to fleetingly emerge at night, if we are lucky“. How might we reverse this, at scale, and with urgency?

​Not really a lot of imagination is needed to go back to how things were before Margaret Thatcher gave the public treasure to rent seeking financial-capitalists.​
Labour to end energy consumer 'rip-off' and renationalise network
Jeremy Corbyn and Rebecca Long-Bailey will say heat and electricity are a human right
https://www.theguardian.com/business/2019/may/15/corbyn-to-reveal-labour-plans-to-nationalise-uks-energy-network

​Let's look at this closely.
On the one hand, we have the theme of needing to transfer investment to renewable energy, or at least not-coal-oil-and-gas.
Then there is a big disconnect.
On the other hand we have projections for global economy and energy use, which are extrapolations of current economic trajectories.
There is no match.
There was big investment in oil until 2014-2014, when global economy went "THUD". That stopped.
There has been a rush to the sugar-high of shale oil in the US, pushed by government and Federal Reserve cheap money and strategic policy. Shale oil is a short term military weapon, which allows the energy-use trendline to extend a few years, but those "investments" won't get paid back. It allows the western empire some expensive oil and gas slack, to enable wars on oil producing countries.
The longer these wars are delayed, the less possible they become​.
I vote: Let's do nothing...
https://oilprice.com/Energy/Energy-General/The-IEAs-Dire-Warning-For-Energy-Markets.html

Finian Cunningham noticed the same thing yesterday as I did. Thanks Eleni.
​ ​After dramatic and patently scripted warnings of “Iranian aggression” by bellicose US officials, there then follows – conveniently enough – an alleged sabotage incident in the Persian Gulf region implicating Iran.
​ ​Meanwhile, US Secretary of State Mike Pompeo poses with a straight face that his country doesn’t want war with Iran. His comments warp credulity given that American forces have suddenly escalated firepower in the Persian Gulf for the purpose of “responding” to alleged Iranian infractions.
​ ​Typically, Western news media are “reporting” (or rather, “echoing”) the purported sabotage incident as if it were fact, basing their source of information on Saudi and Emirati officials, sources which have a vested interest in creating a war pretext against Iran.
https://www.strategic-culture.org/news/2019/05/15/who-really-gains-from-the-gulf-ship-sabotage/

​And so on...
​ Saudi Arabia on Thursday blamed Iran for ordering an attack early this week on two Aramco pipeline booster stations, a strike that was intended as part of a broader sabotage campaign to disrupt world oil supplies, according to Saudi Energy Minister Khalid al-Falih.
The drone attacks came one day after a string of attacks on two Saudi oil tankers and two other vessels in the Strait of Hormuz, and caused the temporary closure of a vital east-west pipeline traversing the kingdom, since reopened.
https://www.zerohedge.com/news/2019-05-16/drone-attacks-aramco-pipeline-ordered-iran-says-saudi-arabia 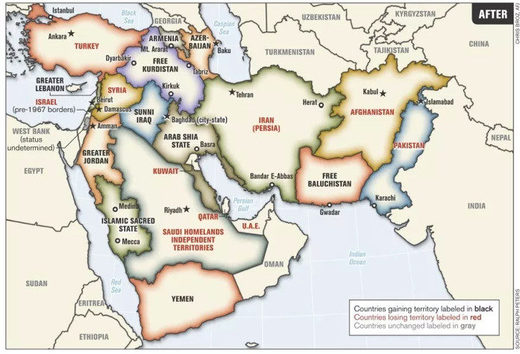 Moon of Alabama:
The scare mongering about an attack on Iran continues. Bolton must be laughing his ass off how easy he can play the issue based on nothing. He simply counters any debunking of the alleged 'thread from Iran' by upping the ante. Yesterday a British general denied that any such threat exists in the area of his responsibility:
“No – there’s been no increased threat from Iranian-backed forces in Iraq and Syria,” Maj. Gen. Christopher Ghika, deputy commander of Operation Inherent Resolve (OIR), the coalition responsible for counter-terrorist operations against ISIS in Iraq and Syria, said in a video briefing, according to the Guardian.
Today Bolton countered that by again raising the noise level around the imaginary threat:
The U.S. Embassy in Iraq says the State Department has ordered all non-essential, non-emergency government staff to leave the country right away amid escalating tensions with Iran.
The alert, published on the embassy's website on Wednesday, comes after Washington last week said it had detected new and urgent threats from Iran and its proxy forces in the region targeting Americans and American interests.
Bolton is for now achieving the results he wants. He systematically fills the public space with talk about the non-existing 'threat from Iran'. If that threat is established in the public mind by its constant repetition, it will be used for the usual false flag incident to justify to launch a war on Iran.
https://www.moonofalabama.org/2019/05/the-lunacy-of-waging-a-war-on-iran-which-china-and-russia-would-win.html#more

So that British General spoke out of turn against the position that the "Iranian threat" had increased, and the Spanish navy pulled it's destroyer out of the USS Abraham Lincoln task force for "mission creep", and Germany and Czech Republic are pulling trainers/advisers out of Iraq for "rising tensions"? Does that leave a coalition-of-the-trapped to help out? Who's on-board?
https://www.theguardian.com/us-news/2019/may/14/no-iran-threat-in-syria-or-iraq-says-top-british-officer-in-defiance-of-us

Iraqi government announces it won't permit US forces to use Iraq to launch attacks on neighboring Iran.
(Yeah, how do they think they can prevent it? Short memories?)
https://www.rt.com/news/459416-iraq-ambassador-us-iran-territory/

Iraq announces agreement to purchase Russian S-400 antiaircraft missile defense systems (which is ridiculous because the US Air Force is there to defend Iraqi skies, right?)
http://tass.com/defense/1058382
​Still Waiting​
Posted by John Day at 10:34 AM