George Galloway:
​ ​The grand old Duke of York sleeps tonight on a feather pillow in a royal palace. Julian Assange, the publisher of the century sleeps in the hell of Belmarsh Prison, Britain’s own Guantanamo Bay.
​ ​The Duke of York lied about the length duration and nature of his relationship with the presumed deceased child-sex trafficker Jeffrey Epstein. Julian Assange told the truth about the high crimes and misdemeanours of the rich and powerful during times of war and peace.
​ ​The FBI need to speak to the Queen’s favorite son, but no power on earth will be deployed to make him testify about what he might have seen, or even have participated in, at the townhouse in Manhattan, a Sodom and Gomorrah of our times.​  ​ 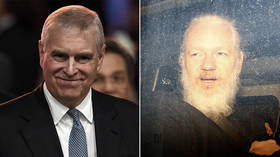 Today, almost every Democratic presidential campaign starts with what one close adviser to Barack Obama calls “The Pilgrimage”: the journey to the West End to meet the former president.
It's like kissing The Pope's Ring. Barkie never had Tulsi over for a luau. Where's the Aloha?
https://www.politico.com/news/magazine/2019/11/26/barack-obama-2020-democrats-candidates-biden-073025

Barkie Hates Bernie:
Word is out that Obama would have come out to publicly detest Sanders, if he got too high in early primary polling.
https://www.nakedcapitalism.com/2019/11/obama-privately-considered-leading-stop-bernie-campaign-to-combat-sanders-2020-surge-report.html

Progressive journalist: MSNBC doesn't try to hide 'contempt' towards Gabbard
​ ​Progressive journalist Michael Tracey claimed Tuesday that MSNBC is has dropped all pretenses for their “contempt” towards Rep. Tulsi Gabbard (D-Hawaii).
​ ​The political news contributor said the left-leaning network has treated her fellow 2020 Democratic candidates, including businessman Andrew Yang and Sen. Bernie Sanders (I-Vt.) unfairly, but he argued that with Gabbard it, “crosses a certain threshold.”
​ ​“Fundamentally they’re beholden to whatever the market incentives are and right now it’s within their market interests to depict Tulsi as an infiltrator, as a Trojan horse in the Democratic Party and not deal on the substance with what she’s saying which is why over and over again they tar her as a Russian plant essentially​.​”
https://thehill.com/hilltv/rising/472056-progressive-journalist-msnbc-doesnt-try-to-hide-contempt-towards-gabbard

Our Girl, Helen of DesTroy​ via Russia Today, a journalistic niche she found:​
​ ​Professional journalists are losing touch with the moral code that once galvanized the profession, a new study shows. But what truth-slinger wouldn’t be having an existential crisis in an industry where facts no longer matter?  ​...​
​ ​Punishing good work while reporting bad has drained journalism not just of morality but credibility. While some might be tempted to blame the industry’s fall from ethical grace on President Donald Trump’s voluble scorn for the press as the “enemy of the people,” the disintegration of the profession’s moral center has been underway for years. The constant “disruption” of the journalism industry over just the last 13 years saw online media kill off newspapers, the 24-hour news cycle take over TV, and ad sales vanish, sucked up by the Google-Facebook industrial complex.
​ ​To survive this shifting landscape, as the morality study explains, journalists have had to adapt, leaving their identities in flux. A well-developed sense of professional ethics can be a liability in a newsroom where writers are pressured to deliver clicks by any means necessary. In upside-down-world “news” where speed, novelty and ideological fealty are more important than truth, morality all but disqualifies one to be a journalist.https://www.rt.com/op-ed/474033-journalists-moral-compass-fake-news/

Caitlin Johnstone has a couple of stories about the fake-chlorine attack in Syria being leaked. (Truthy Tucker, too.)
​ ​So you know that Organisation for the Prohibition of Chemical Weapons scandal we've been talking a lot about lately? The one where evidence keeps piling up that the US, UK and France launched airstrikes against the Syrian government last year in retaliation for a poison gas attack which never took place, and then manipulated an ostensibly independent and international chemical weapons watchdog organization into covering it up?
​ ​Well, it turns out that bigtime news media outlets haven't been all that interested for some strange and mysterious reason. But just today they broke the silence with a new report that mentioned the scandal, and they've totally spun it in a way that makes the US and its allies look good! Can you believe that?
https://caitlinjohnstone.com/2019/11/25/surprise-msm-spins-opcw-leak-as-russian-disinfo/
https://caitlinjohnstone.com/2019/11/27/narrative-managers-faceplant-in-hilarious-opcw-scandal-spin-job/

​Moon of Alabama figures the Democratic Party has way too much to lose if it votes to impeach Trump in the House, win or lose. Discovery in the Senate will reveal vast criminality, not just Biden and Ukraine scams. Can't have that.
What if they LOSE a vote to impeach?​ That road also leads to a Trump windfall.
The House Democrats can safely vote to say "BAD PRESIDENT" and it will be over, without further downside risks.
https://www.moonofalabama.org/2019/11/the-house-will-not-vote-on-impeachment-it-will-censure-trump.html

​China and Russia have interests in getting the stalled Iranian gas pipeline to Pakistan project back in play and finished soon.​ It looks like China has passed legislation to get that project back on track. (Washington shouts at Karachi.)
https://oilprice.com/Energy/Energy-General/A-New-Pipeline-Could-Undo-Americas-Influence-In-Asia.html

Politics of plutonium. Let the bidding begin!
​ ​In the time it will take for South Carolina’s stockpile of weapons-grade plutonium to decay, you could repeat most of human history, starting back in the Stone Age.
​ ​By the time its byproducts lose the explosive potential to be used in nuclear weapons, some 7 billion years will have passed. The Earth itself will have doubled in age, and then some.
​ ​The U.S. government will officially decide in the next few years where the plutonium — the metal used to trigger nuclear weapons — will spend that eternity. And when it does, it will ask another part of the country to bear a profound burden: to house thousands of barrels filled with scraps of the Cold War and America’s nuclear arms race, a legacy that may well outlast our civilization.
​ ​That question will soon be posed to New Mexico, where the U.S. Department of Energy has excavated cavernous vaults deep below the ruddy soil in the state’s southeastern corner.
https://www.postandcourier.com/news/the-us-wants-to-bury-sc-s-plutonium-stockpile-forever/article_cbe6029e-07eb-11ea-9622-639a44471d1a.html

Even ideal electric vehicles contribute more CO2 per mile than diesel, and that does not appear, in this German study, to include the sunk environmental degradation of mining rare-earth metals for the motors and lithium for the batteries, nor the fact that you can't recycle a Tesla.
https://www.theguardian.com/environment/2019/nov/25/are-electric-vehicles-really-so-climate-friendly

No disrespect to NATO or the New York Fed, but...
The Bundesbank (the German central bank) published a book last year named Germany’s Gold. In the introduction, written by the President of the Bundesbank Jens Weidmann, the view of this bank leaves no room for interpretation. Weidmann writes (emphasis mine):
​ ​Ask anyone in Germany what they associate with gold and, more often than not, they will say that it is synonymous with enduring value and economic prosperity.
​ ​Ask us at the Bundesbank what our gold holdings mean for us and we will tell you that, first and foremost, they make up a very large share of Germany’s reserve assets ... [and they] are a major anchor underpinning confidence in the intrinsic value of the Bundesbank’s balance sheet.
​ ​The Bundesbank produced this publication to give a detailed account, the first of its kind, of how gold has grown in importance over the course of history, first as medium of payment, later as the bedrock of stability for the international monetary system.
https://www.voimagold.com/insight/german-central-bank-gold-is-the-bedrock-of-stability-for-the-international-monetary-system