After a long, busy Friday at clinic, and swabbing a lot of noses for virus, Jenny and I drove 4 hours to Dallas, arriving to help our son Steve pack and move the next day, which started early. The brown cloud of African dirt got worse and worse as we headed north from Austin. Saturday morning began early with a few hours of mowing the hayfield into a lawn, then packing and moving with sons Steve (movee) and Jim (mover). After an early dinner, Jenny and I drove another 6 hours down to Yoakum, noting the African sand fading as we made our way closer to the gulf of Mexico, arrived late at night again, and sacked-out. We had only Sunday to do the work, so only 4 hours of mowing and weeding got done, though we spent about 4 hours picking and shelling fresh blackeyed peas into freezer bags for a massive New Years Day luck -bolus project we're working on.
Arising before dawn, we hit the road to Austin at 7AM today, to get Jenny to her doctor's appointment and me to cook some brunch and get to work. Those missions were accomplished. Lots more noses swabbed and human bodies examined. Lots of tasks performed, then got home to have some okra and blackeyed peas with Jenny.
It's our 35th wedding anniversary today. We have been training for our Machu Picchu trek since September, last 2 weeks of July... We're officially not doing it, because we had not counted on Texas COVID cases shooting up like this. Peru is doing ok, especially Cusco and mountain trails.
Instead, we're going to try to get 8 hours of sleep.
Bedtime.... Early work-day tomorrow.
See photo below in Austin garden before sunset. 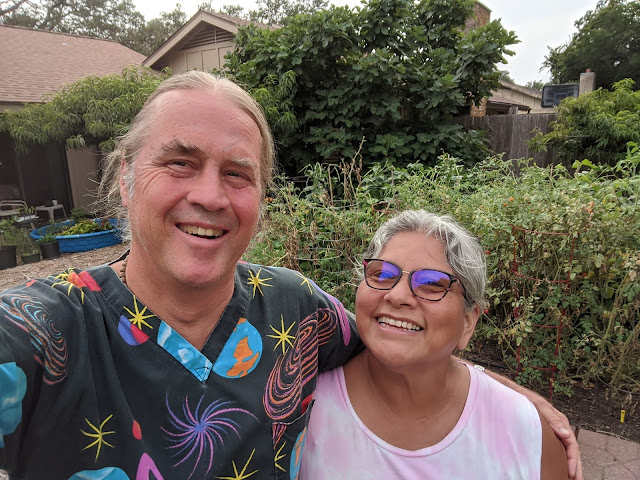