​  ​A former advisor to Steve Jobs warns that Facebook is “destroying the very fabric of human relationships” by making its users become addicted to anger.
​  ​During a question and answer session at the 2020 CogX conference, Joanna Hoffman was asked about the cult of leadership within Silicon Valley.
​  ​“As I look at Facebook, for example, I keep thinking are they really that ignorant or is this motivated by something … darker than what appears?” she said.
​  ​Hoffman went on to accuse Facebook of “destroying the very fabric of democracy, destroying the very fabric of human relationships and peddling in an addictive drug called anger.”
​  ​“You know it’s just like tobacco, it’s no different than the opioids,” she added. “We know anger is addictive, we know we can attract people to our platform and get engagement if we get them pissed off enough. So therefore what, we should capitalize on that each and every time?”

​Layer after layer of proof-of-origin exists in the genetic code of SARS-CoV-2. It's a lab creation.
Numerous "gain of function" mechanisms give this virus enhanced infectivity.
​COVID-19 virus has properties that have never been found in nature before
https://www.wionews.com/opinions-blogs/covid-19-virus-has-properties-that-have-never-been-found-in-nature-before-304229

Will protests spread the coronavirus more than beach parties? Bars are still more effective, I suspect.
​  ​Trevor Bedford, a researcher at the Fred Hutchinson Cancer Research Center, publicly provided his rough estimate on the impact of protests. In a series of tweets, Bedford said he expects the protests to increase the number of infections in the United States by 3 percent to 6 percent per day. At this point in the pandemic, that would likely mean adding more than 10, but less than 100, deaths per day, he estimated.
​  ​Complicating matters is the fact that the unique elements of protests—shouting, tear gas, pepper spray, and closely packed jails—will also increase transmission potential, disease modelers say. COVID-19 disproportionately affects people of color.

​Dennis Meadows, an original Author of The Limits To Growth, points out that pandemics happen regularly, but the economic system growing exponentially continues to impair resilience of natural support systems (like oceans, forests, soil microbes and our bodies)​ as resource depletion requires higher production efficiencies. Higher efficiency systems are inherently more fragile to shocks.
Limits to Growth and the COVID-19 epidemic

Coronavirus - How A German City Proved That Wearing Masks Works​   (Note: Germans , YMMV)
​  ​On April 6 the German city of Jena with a population of 110,000 people ordered everyone to wear a mask in all publicsettings. The announcement of the order was made a week earlier and was followed by a local awareness campaign - "Jena wears mask!"
​  ​No other city in Germany did this at the time. The states of Germany only ordered mandatory mask wearing between April 22 and 26.
​  ​For 20 days Jena was different than the rest of the country but experienced the same epidemic. That made it possible to test the effect the mask order had on the number of new cases in Jena.​..

​  At the beginning of the pandemic in Germany the synthetic city and Jena had similar developments. But ten days after the announcement of the order and four days after its mandatory implementation the case numbers in Jena dropped away from those of the comparison city. 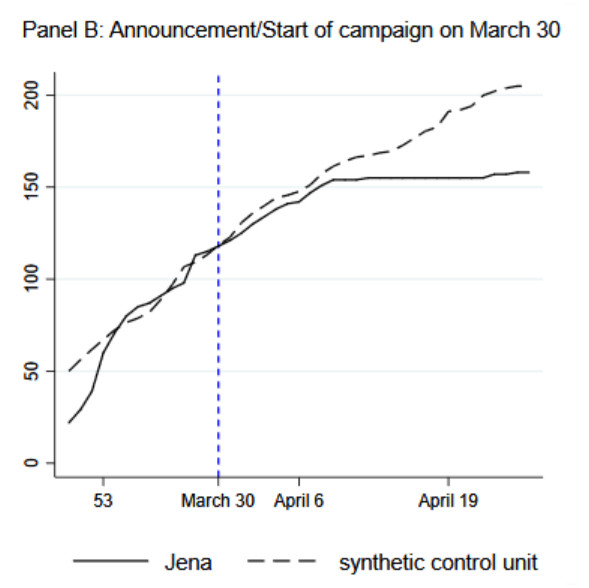 ​More support for universal face mask use​.
(This would be most important in public indoor venues, not open spaces with low population density. It's the standing clouds of viral particles building up in the air that a lot of people breathe, which really put a multiplier on the super-spreader events, which are so important.)
https://www.sfgate.com/science/article/Study-100-face-mask-use-could-crush-second-15333170.php

Some states have embraced online voting. It's a huge risk.
People’s phones, tablets and computers are vulnerable to hackers. Securing the internet could take a decade or more. But some states are plowing ahead anyway.
https://www.politico.com/news/2020/06/08/online-voting-304013

​Ban of highest tech chips, including those made outside the US, with American equipment, is a short term battle in a long trade war.​ There are so many moving parts, and the future will not match any one model.
​  ​“Some question whether the U.S. can enforce the sale ban in a complex industry scattered worldwide. Yet the success of U.S. sanctions against Iran highlights Washington’s ability to monitor global transactions when it is a high priority. Thanks to America’s leading position in semiconductors going back to the 20th century, U.S. law is still a gatekeeper to the most sophisticated microchips, and Washington can likely block China from achieving technological parity with the U.S. – for now.”
​  ​Earlier this year the Defense Department intervened to block the same Commerce Department proposal that the administration adopted in May. The risks to American pre-eminence are enormous. American leadership in semiconductor manufacturing is already a thing of the past in lithography, the most difficult part of the production process, and it is slipping elsewhere.
​  ​The chip ban gives the world an enormous incentive to circumvent the US, raising the risk that the US rather than China will be left without a chair when the music stops.

​When corporate interests control the commons, and the political system, they destroy the commons, and the commoners, and their communities. Case in point, forests in Washington State.
​https://features.propublica.org/oregon-timber/severance-tax-cut-wall-street-private-logging-companies/
​Commoner​
Posted by John Day at 6:41 PM