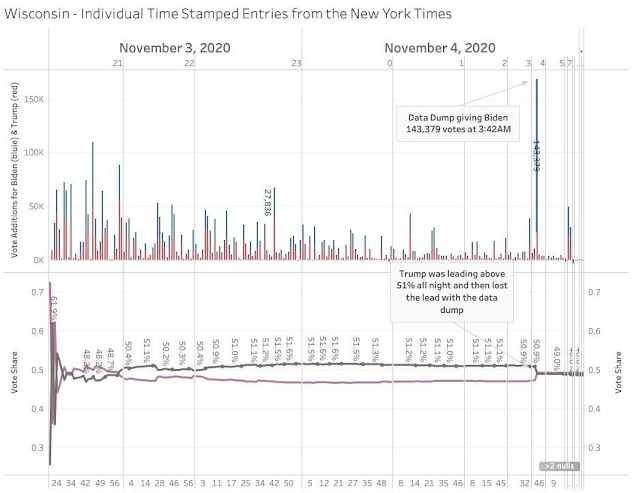 ​OffGuardian is leftish, but it's Russian, of course... 1) Proud American tradition, 2) More little graphs
6 Factors Which Point to a Rigged Election
The mainstream media are quick to call the claim “baseless”, but there’s plenty of evidence for anyone willing to see it.
https://off-guardian.org/2020/11/16/6-factors-which-point-to-a-rigged-election/
Houston Democratic Machine at work:
Biden Campaign Operative, Texas State Senator Accused of Mail-in Ballot Fraud
Witnesses allege Texas Sen. Boris Miles and Harris County Commissioner Rodney Ellis were orchestrating a ballot harvesting scheme with help from Biden campaign official Dallas Jones.
https://thetexan.news/biden-campaign-operative-texas-state-senator-accused-of-mail-in-ballot-fraud/
I don't think I ever even heard of this important man.
​Lord Malloch Brown Revealed: The British Hand Behind the Coup Shows Its Scales Again
​  ​While one side of the unipolar world government agenda was driven by a view that the USA should forever be the primary global police force governing a zero sum system of perpetual war, with an unelected elite managing the system from above, the other side believed that the USA should surrender its claims to sovereignty to an international global body with unelected technocrats and financiers at the top managing the zero sum system of perpetual war from above.
Notice the common denominator?​   [I count 2 common denominators]​ ...​
​...the key figure controlling Smartmatic is none other than Lord Mark Malloch Brown, a former vice chairman of George Soros’ Investment Funds (2007), as well as Soros’ Open Society Institute and World Economic Forum, former Vice President at the World Bank (1995-1999), UN Administrator for Development (1999-2005), UN Deputy Secretary General and UK Minister of State for Africa, Asia and the UN (2007-2009)...
On February 24, 2008, Samantha...Power said: “The principal conduit between Britain and the Candidate [Obama] has been Lord Malloch Brown, the Junior Foreign Minister, whom Obama came to admire when he [Malloch Brown] was Deputy Secretary General of the United Nations, Obama was really taken with him. It’s a relationship that has persisted and they have talked a number of times since.”​...
​  ​Speaking to the World Government Summit of June 2020 alongside Cass Sunstein and an array of other Davos-creatures, Lord Malloch Brown expressed his disdain for the rise of the multipolar alliance led by Russia, China and Trump’s USA which has obviously endangered his life’s work.​..  ​“In the wider world a more authoritarian form of government is the new majority. It is not China alone. This “new majority” embraces leaders who come to power by the ballot box and those who didn’t, but who all share a preference for a nationalist foreign policy, the weakening of domestic institutions and the rule of law”
https://www.strategic-culture.org/news/2020/11/17/lord-malloch-brown-revealed-the-british-hand-behind-coup-shows-its-scales-again/
Yay Slovenia, Boo Merkel...
Brussels officially has a full-blown populist rebellion on its hands.
​  ​After Hungary and Poland blocked the EU's $900 billion COVID-19 recovery package as well as the seven-year, €1.8 trillion ($2.1 billion) budget over Brussels' attempt to "force foreign values upon member nations" in a long running dispute over democratic norms, immigration and the "illiberal" tilt of Poland and Hungary.
​  ​A clause in the budget would strip Budapest and Warsaw of billions of euros in EU funding if they don't impose certain measures to strengthen the "rule of law" as Brussels sees fit. Both Hungary and Poland are facing EU "investigations" over allegations they undermined the independence of courts and the media.
https://www.zerohedge.com/geopolitical/slovenia-backs-hungary-poland-standoff-brussels-thats-delaying-covid-relief
​Yay Deutschen Volke:​
​  ​Thousands of demonstrators on Wednesday protested against the German government's attempt to enact additional coronavirus restrictions. German police were forced to unleash water cannons and pepper spray to disperse angry crowds in Berlin's government district, according to Deutsche Welle (DW).
​  ​Around 190 protesters were arrested, and nine police officers were injured after clashes in central Berlin. Police said large crowds ignored repeated calls to wear face masks and practice safe social distancing - though none of the requests were followed by protesters.
https://www.zerohedge.com/political/we-are-people-german-protesters-clash-police-over-new-coronavirus-restrictions
“Great Reset” mastermind Klaus Schwab suggests a number of draconian measures for controlling the population under the umbrella of the ‘4th Industrial Revolution’, including risk-assessment brain scans to cross borders and implantable chips to read people’s thoughts.
https://summit.news/2020/11/17/great-reset-mastermind-suggests-risk-assessment-brain-scans-before-allowing-travel/
​Europe needs excuses to buy cheap Russian pipeline gas and not expensive American LNG.
​  ​French utility Engie recently pulled out of a major long-term deal with NextDecade that would have seen it import millions of tons of U.S. liquefied natural gas. The Wall Street Journal cited earlier media reports naming the French government as the power behind the decision, which was reportedly motivated by concerns about fracking: according to the reports, Paris considered fracking an emission-heavy way of extracting natural gas.
https://oilprice.com/Energy/Natural-Gas/Europes-Green-Deal-Is-Bad-News-For-US-LNG.html
World Economic Forum’s ‘Great Reset’ Plan for Big Food Benefits Industry, Not People
“The Great Reset is about maintaining and empowering a corporate extraction machine and the private ownership of life.” — Vandana Shiva
https://childrenshealthdefense.org/defender/world-economic-forums-great-reset-plan-for-big-food-benefits-industry-not-people/
Nothing much to see here... Move along, now.
Moral Collapse and State Failure: A View From the Past
​  ​While causes of decline were varied, we describe and comment on four well-documented examples in which primary causality can be traced to a principal leadership that inexplicably abandoned core principles of state-building that were foundational to these polities, while also ignoring their expected roles as effective leaders and moral exemplars.
https://www.frontiersin.org/articles/10.3389/fpos.2020.568704/full
​Openly deciding to murder civilian women and children on whims...
​Australian War Crimes Report Means Get The F​..​k Out Of Afghanistan
https://caitlinjohnstone.com/2020/11/19/australian-war-crimes-report-means-get-the-fuck-out-of-afghanistan/#comment-48805
Arguing for a Small Farm Future:
​  ​Nobody can tell what the future holds, but it’s a fair bet that global economic output won’t grow sixfold over the next 50 years as it has done over the last 50. Nor is it likely that fossil fuel use will triple like it has done over the same period. In fact, it seems clear that we’ll probably have to make do with less energy globally and with virtually no fossil fuels at all (currently, 85% of global energy consumption is fossil-fuel based) – and even then climate change will force major changes to the world we know.
https://www.resilience.org/stories/2020-11-16/arguing-for-a-small-farm-future/
Revising Future History
Posted by John Day at 11:03 AM