Jake Angeli, the guy in the videos with a horned Davy Crockett hat was at an Arizona BLM rally, as well as the congressional chambers. He IS a QAnon celebrity, and I just didn't know. Several people have pointed that out. Thanks Cat for this Thursday phone interview with "Shaman Jake".
https://www.bitchute.com/video/eIR6LLIXoT3B/
Thanks for this image, Colleen, but it seems like the cartoon was revised, rather than predictive. 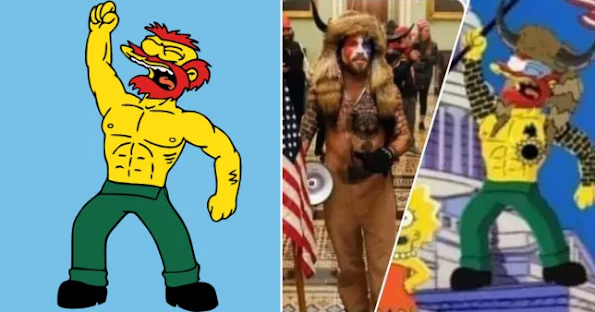 https://metro.co.uk/2021/01/08/the-simpsons-didnt-predict-qanon-shaman-from-capitol-riots-13872219/
The video of Ashli Babit being shot was taken by a BLM activist at the advancing front line in the capitol building. Thanks Travis.
Why Was Founder Of Far-Left BLM Group Filming Inside Capitol As Police Shot Protester?
https://www.zerohedge.com/political/why-was-founder-far-left-blm-group-filming-inside-capitol-police-shot-protester
Is there some cancer growing everywhere, independently of nations?
How does cancer work? it kills the host, right? Yugoslavia, Georgia, Ukraine...
Do you realize now what you have done? US gets the kind of ‘democracy’ it championed overseas​
​Nebojsa Malic​ ​is a Serbian-American journalist, blogger and translator, who wrote a regular column for Antiwar.com from 2000 to 2015, and is now senior writer at RT.​ Russia Alert  (Hey, Russia survived something like this after a decade at death's door.)​
​  ​Way back in 2004, the Guardian wrote approvingly about how the US has created a “slick” operation of “engineering democracy through the ballot box and civil disobedience,” developing since Belgrade a “template for winning other people’s elections.”
​  ​Now the same mainstream media that slavishly followed the State Department line in denouncing elections elsewhere as “rigged” and color revolutions as spontaneous democracy are clutching their pearls when Americans who believe their election was stolen take to the streets and storm their Capitol.
https://www.rt.com/op-ed/511740-us-democracy-congress-stormed/
​Moon of Alabama​ is not a QAnon acolyte, but an intelligence analyst:
​  ​Trump spoke out against violence and called on the people to leave peacefully only to get censored by the blue tick monopoly:
​  ​Protesters, who were seen fighting with officers both inside the building and outside, were described as "special people" by President Donald Trump, who responded to calls to condemn the violence.
​  ​In a video address shared on Twitter, he urged his supporters to "go home" but repeated an unsubstantiated claim that the election was "stolen".
​  ​He said: "I know your pain, I know you’re hurt. We had an election that was stolen from us, it was a landslide election and everyone knows it especially the other side.
​  ​"But you have to go home now, we have to have peace, we have to have law and order, we have to respect our great people in law and order. We don't want anybody hurt."
​  ​He described it as a "tough period of time", and repeated false claims that the November's election was "fraudulent".
​  ​He ended the video message by calling the protesters "very special", adding: "We can’t play into the hands of these people.
"We have to have peace. So go home. We love you. You’re very special."
Twitter disabled the video from being liked or retweeted "due to a risk of violence". It was later deleted.
Explain to me how the above quotes are risking violence or a breach of 'civic integrity'?
What, please, is that?
https://www.moonofalabama.org/2021/01/leaving-in-style-.html#more
​Trump's speech was long, unscripted, spontaneous, repetitive and has a lot of specific facts about the multi level electronic and human election rigging (which had to get sloppy and blatant, after the Dominion adjustments weren't adequate).​
​  ​Our exciting adventures and boldest endeavors have not yet begun. My fellow Americans for our movement, for our children and for our beloved country and I say this, despite all that’s happened, the best is yet to come.
​  ​So we’re going to, we’re going to walk down Pennsylvania Avenue, I love Pennsylvania Avenue, and we’re going to the Capitol and we’re going to try and give… The Democrats are hopeless. They’re never voting for anything, not even one vote. But we’re going to try and give our Republicans, the weak ones, because the strong ones don’t need any of our help, we’re going to try and give them the kind of pride and boldness that they need to take back our country.
​  ​So let’s walk down Pennsylvania Avenue. I want to thank you all. God bless you and God bless America. Thank you all for being here, this is incredible. Thank you very much. Thank you.
https://www.rev.com/blog/transcripts/donald-trump-speech-save-america-rally-transcript-january-6
Tiananmen Avoided in D.C. as Trump Era Ends​, Tom Luongo​
​  ​On January 6th, 2021 the Trump Era of U.S. history ended.
Nothing will be the same after the events on Capitol Hill. There is no going back. That much is obvious.
​  ​The shock of those events wasn’t Trump calling a rally of his supporters to the Capitol or that they were seething with anger over what is clearly a stolen election.
​  ​The shock was that they “aimed to misbehave” after coming to the realization that the America they thought they lived in no longer existed.
​  ​I’ve said many times in 2020 that this election was the last chance to keep a lid on their anger. It was, in their minds, their last non-violent way of choosing the rules they lived under.
​  ​As long as the results looked even remotely fair they would be willing to accept them and make the best of it. That’s the contract right?
But they would not accept fraud.
Because fraud is theft. And theft is force. Theft is ultimately violence.
​  ​So everyone clutching their pearls today over the ‘violence’ of January 6th needs to remember that violence is baked into this story at every level.
​  ​In fact, the worst pearl clutchers are the ones whose power is most threatened, i.e. Congress, and the cowards unwilling to stand next to those facing them down.
Her name is Ashli Babbitt.​ ​
​  ​Because as George Washington almost certainly didn’t say …
​"​Government is not reason, it is not eloquence,—it is force! Like fire, it is a dangerous servant, and a fearful master; never for a moment should it be left to irresponsible action​."​
​ ​Force was on display fully at the capitol but it wasn’t coming from the people. It was coming from Congress who knowingly certified a fraudulent election hiding behind their cowardice and corruption.
https://tomluongo.me/2021/01/07/tiananmen-avoided-d-c-as-trump-era-ends/
​Unrepresented​
Posted by John Day at 10:24 AM