Moon of Alabama has a good article about the collective west, and many usually-intelligent analysts drinking their own Kool-Aid about the operation to bleed Russia to death in Ukraine, which is actually bleeding the west to death in Ukraine, while energy-starving Europe. The Russians began the special-military-operation barely ahead of Ukraine in combat battalion equivalents, and are now way ahead. They executed a slow destruction of deeply dug defensive battlements, designed to wear them out, and manned by the best active army in Europe, initially with more tanks than the rest of the European NATO members combined. The US and NATO can not begin to make up the massive losses of those 8 years of military build up in Ukraine, which is largely destroyed. The western industrial base cannot keep up with artillery usage. Russia is increasing stockpiles of munitions while shelling like mad day after day.
I'll only include this extremely clear quote from V. Putin:
​..​This is the beginning of the transition from liberal-globalist American egocentrism to a truly multipolar world based not on self-serving rules made up by someone for their own needs, behind which there is nothing but striving for hegemony, not on hypocritical double standards, but on international law and the genuine sovereignty of nations and civilisations, on their will to live their historical destiny, with their own values and traditions, and to align cooperation on the basis of democracy, justice and equality.
​  ​Everyone should understand that this process cannot be stopped. The course of history is inexorable, and the collective West’s attempts to impose its new world order on the rest of the world are doomed.
https://www.moonofalabama.org/2022/07/drinking-the-kool-aid-on-the-war-in-ukraine.html
​The fancy, expensive, longer range boutique weapons need expensive missiles and shells.​
​  ​Russian warships have destroyed stocks of US-supplied ammunition, by striking arms depots in Ukraine’s central Dnepropetrovsk Region with Kalibr cruise missiles, the defense ministry stated on Monday.
​  ​“Stores of ammunition for US-delivered HIMARS multiple rocket launchers and M772 howitzers, as well as for 2S7 Pion self-propelled guns have been destroyed,” Defense Ministry spokesman Lieutenant General Igor Konashenkov said during his daily press briefing.
https://www.rt.com/russia/558768-himars-stikes-western-ammo/
When sanctions backfire: The EU doesn't have a plan for life without cheap Russia energy, so what happens next?
https://www.rt.com/russia/558497-european-industry-future-deficit/
​Russia says they will get Nordstream-1 back online, on schedule, when this turbine pump is returned to back in during maintenance, now underway.
​In Pipeline Poker, Canada Folds: Will Release Sanctioned Russian Gas Turbine
https://www.zerohedge.com/geopolitical/pipeline-poker-canada-folds-will-release-sanctioned-russian-gas-turbine
​How do you "prepare" to freeze, starve and die?
French, German Leaders Warn Populations "Prepare For Total Cut-Off Of Russian Gas" As Social Unrest Looms
https://www.zerohedge.com/energy/french-german-leaders-warn-populations-prepare-total-cut-russian-gas-social-unrest-looms
Russia is shelving plans for natural gas pipelines to India and Japan, due to high vulnerability to attacks (of various sorts).
https://www.seetao.com/details/86540.html
BA.5: "Ninja" COVID is the latest fear-porn marketing exercise.
It is the most transmissible yet, but much milder than all pre-Omicron strains, though considerably worse for "vaccinated" and especially "boosted" of all ages. Most people are having 2-5 days of mild to moderate illness, but not "boosted" Dr. Fauci...
https://boriquagato.substack.com/p/i-see-we-have-entered-the-ninja-level
From December 23, when Delta reached out and touched our household, and still relevant:
OTC Rxs for Omicron  https://www.johndayblog.com/2021/12/otc-covid-rxs-for-omicron.html
Steve Kirsch documents over 40 specific pieces of evidence refuting/shredding the mantra-like "safe and effective" lie:
The "safe and effective" narrative is falling apart
https://stevekirsch.substack.com/p/the-safe-and-effective-narrative
​It has nothing to do with protection from legal liability once a vaccine is approved for routine pediatric use; nothing...​
​  ​Vaccinated toddlers in Pfizer’s trial were more likely to get severely ill with COVID-19 than those who received a placebo. Most children who developed multiple infections during the trial were vaccinated.
​  ​“FDA granted the Pfizer and Moderna vaccines for toddlers an emergency-use authorization allowing the agency to expedite access for products that ‘prevent serious or life-threatening diseases or conditions,’” wrote Finley.
​  ​“While adult COVID vaccines clearly met this standard in late 2020, the toddler vaccines don’t.”
​  ​As to why the FDA “rushed” and “bent its standards,” Finley suggested, “perhaps [the FDA] felt pressure from the White House as well as anxious parents.”
https://childrenshealthdefense.org/defender/toddler-covid-vaccines-fda-eua-wall-street-journal/?
​Really and truly. This is the defense, and it is a strong one. "The government knew, and still paid us, so it is not "material"'.​
​  ​In an interview with The Defender, the lawyer representing whistleblower Brook Jackson said Pfizer is arguing the court should dismiss Jackson’s lawsuit alleging fraud in Pfizer’s COVID-19 clinical trials because the U.S. government knew about the wrongdoings but continued to do business with the vaccine maker.
https://childrenshealthdefense.org/defender/pfizer-whistleblower-lawsuit-fraud/?

What Happens when the Majority of a Nation’s Citizens Decide Not to Comply with Tyrannical Edicts? Tanzania May Provide an Answer​  (Thanks Luc)
(..alleged first hand account of what happened in Tanzania after former President John Magufuli died under suspicious circumstances after opposing COVID-19 vaccines and other COVID measures.)
​  ​President John Magufuli was one of the most popular African leaders of recent history. His support base amongst ordinary people was real and enormous, due to his genuine warmth, his determination to put the people first and to rid his country of corruption, fat cats and government idleness.​..​​
.. ​Within a few weeks of President Magufuli’s murder, his replacement, Samia Suluhu Hassan, a female World Economic Forum attendee, set about installing the Cabal’s COVID agenda. It was a thoroughly depressing experience. I know. I was there to see it.
​  ​Gone forever were Magufuli’s maskless smile and palpable warmth, replaced now by daily images of a cold, insentient president and her entire entourage all muzzled, as per the Cabal’s orders...
..But then, after just one week, something happened. Something truly remarkable…
After just one week of all the fear and insanity, the people of Tanzania had had enough.
Call it the legacy of Magufuli, call it divine intervention, or perhaps just plain old common sense, but it is a fact that within just seven days, great cracks began to appear in the COVID narrative in Tanzania.
First it was the police. Working in the tropical heat, they quickly realised that they were suffocating behind their masks, so they threw them where they belonged – in the bin.
So, when you see that the police themselves are questioning the narrative and distancing themselves from the nonsense, what happens?
Everyone else follows.​..
​.​.Quietly, THE WHOLE OF TANZANIA STOPPED COMPLYING..
https://healthimpactnews.com/2022/what-happens-when-the-majority-of-a-nations-citizens-decide-not-to-comply-with-tyrannical-edicts-tanzania-may-provide-an-answer/
​It's RENT (and this includes rent paid to banks and rent paid as taxes). It's almost all High Rent in "expensive" cities.
Cost of Living Is Really All About Housing
https://www.bloomberg.com/news/articles/2014-07-21/cost-of-living-is-really-all-about-housing
Tax Paying Citizen  (pictured with garden in daily 105F heat) 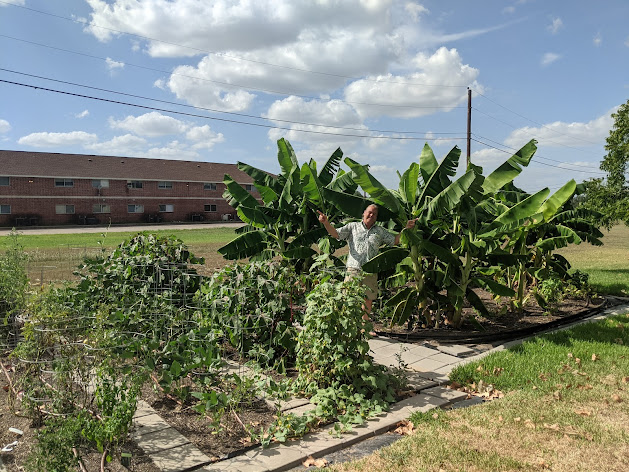