Living in the Past,

Everything in our world assumes plentiful energy, liquid fuel, oil. That assumption is grossly in error. Our owners know it, and we are being fed sweet lies on the way to the slaughterhouse. Which slaughterhouse? When do we get there? I have oversimplified. This polite Irish article gets there far more gently, but look at the chart. Thanks Charles.
http://www.feasta.org/2017/01/22/end-of-the-oilocene-the-demise-of-the-global-oil-industry-and-of-the-global-economic-system-as-we-know-it/ 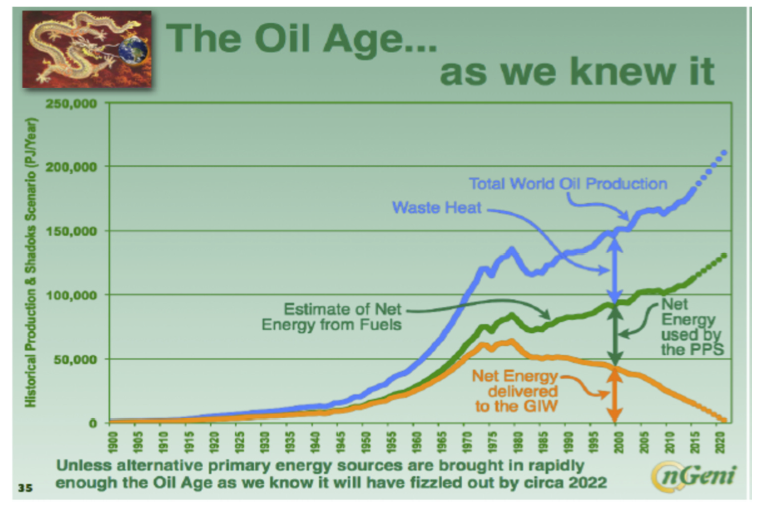 What's Wrong With Renewable Energy?
It's only "renewable" if you have lots of oil to keep making it. It's like Hamburger-Helper. You need hamburger. Thanks again, Charles.
https://storiesofcreativeecology.wordpress.com/2014/06/25/whats-wrong-with-renewable-energy/

How the status-quo unravels, As the pie shrinks, everybody demands their piece should bigger, Charles Hugh Smith
http://www.oftwominds.com/blogfeb17/pie-shrinks2-17.html

Saker update on Trump administration:
"Whatever may be the case, the big story for the foreseeable future will be the infighting inside the US deep state. Why infighting? Because Trump is also part of the deep state, he did not just suddenly pop out of nowhere ex nihilo, he had, and still has, powerful backers. That’s the, comparatively speaking, the good news. The bad news is that the faction of the deep state which is backing Trump appears to be the weaker one. And Trump himself is not exactly a knight in shining armor, to put it mildly. Still, if we imagine that by some aggregate measure of power the anti-Trump forces inside the deep state are, oh, 70% and the Trump supporters are therefore 30%, the infighting between the 70% and the 30% will leave very little energy to either party to deal with Russia, China or Iran."
http://thesaker.is/trump-dreams-vs-trump-reality-hopes-still-permitted/

"A civil war for control of the country has erupted between the deep state and Donald Trump", Michael Snyder, who doesn't see Trump as the champion of a deep state underdog faction, but as an outsider. Intelligent and well informed people I know hold both of these views. I am of the opinion that nobody can be in the white house without a deep state sponsor.
http://endoftheamericandream.com/archives/a-civil-war-for-control-of-the-u-s-government-has-erupted-between-the-deep-state-and-donald-trump

Greece is no longer a sovereign state. That's a misperception. So who has the authority to default on Greek debt? No hands?
http://www.defenddemocracy.press/greek-default-to-be-or-not-to-be/

No Longer Useful
Posted by John Day at 9:46 AM