There is something particularly disturbing about the minuscule amount of footage recently released by HHS last week—it only shows boys, and only boys age 10 and up. Where are the girls? Where are the toddlers? Where are the babies? According to official policy, the government does not remove toddlers and babies from their mothers. However, as TFTP reported, a mother from Honduras who came to the U.S. seeking asylum with her family said she was breastfeeding her infant at a detention center when her baby was suddenly taken from her with no warning and no explanation.
Now, the question of “where are the girls?” has become such an issue that it made its way to the White House and a reporter asked Department of Homeland Security Chief Kirstjen Nielsen.
Monday afternoon, during a White House press briefing, a reporter asked,
“Why is the government only releasing images of the boys being held? Where are the girls & toddlers?”
Nielsen could not answer.
​These children are being used as pawns in a political game as rivals bicker over how to handle them while ignoring real factors that would curb this massive immigration problem.Many Americans have been taught to dehumanize these refugees and to believe that it is not our problem. However, these refugees are a direct result of decades-old US policy.
In the heart-wrenching video above, one of the girls claims to be from Honduras. Honduras is currently a crime-ridden hell hole rife with gang violence as coca plantations thrive—all thanks to the war on drugs. https://www.globalresearch.ca/where-are-the-girls-child-trafficking-feared-as-dhs-cant-say-where-immigrant-girls-are-being-held/5644869

​Explaining the details of Trump's executive order to stop breaking up refugee families at the border. It says nothing about rejoining families, already separated. It is clearly meant to diffuse the bad press, so stop paying attention!
​https://www.usatoday.com/story/news/politics/onpolitics/2018/06/20/breaking-down-donald-trumps-executive-order-politics-roundup/720012002/

Wigs sends this piece by Diana Johnstone, loking at stances towards immigration, and what creates the two camps, for and against. Ms Johnstone does not look at the wars of imperial convenience that are the root cause, but at German responses to this "given".
Finally, it depends on whether you think of immigrants as individuals or as a mass. Concerning individuals, compassion reigns. You want to get to know that person, make a friend, help a fellow human being. As a mass, it is different because you have to think also of social results and you do not know whom you are getting.
http://www.unz.com/article/immigration-divides-europe-and-the-german-left/

How could there be a conscientious objector graduating from West Point? There just was, Spencer Rapone. Thanks Ray.
“I consider myself a revolutionary socialist,” the 26-year-old said. “I would encourage all soldiers who have a conscience to lay down their arms and join me and so many others who are willing to stop serving the agents of imperialism and join us in a revolutionary movement.”
Rapone said his journey to communism grew out of his experiences as an army ranger in Afghanistan before he was accepted into the US Military Academy. And those views only hardened during his studies of history as one of the academy’s “Long Gray Line”. 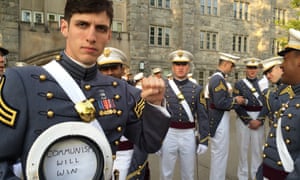 It's ALL about money in the Democratic Party. That's not a bug, it's a feature. Change? No, we're only taking $1000 bills today. You, re not a candidate, Bye, now!
But Clegg didn't get to pledge the DCCC frat, and the reason is obvious: funding. If you don't come in the door with your pockets full, your only other way in, almost regardless of policy or background, is to prove you can bring in ass-loads of outside cash.​ ​
"That's what they tell you – that you need money to win, that it's all about the money," Clegg says.
https://www.rollingstone.com/politics/features/new-york-19th-district-w521726

​There are large strategic deposits of rare earth minerals in North Korea. Most of the rest are in China. What's a fading global empire to do?
​https://thesaker.is/sexy-metal-the-missing-element-in-the-korean-puzzle/

About those pipelines, and railroads to link North and South Korea, and Russia...
http://tass.com/economy/1010252

The main issue about the "freeze for freeze" suggested by Russia and china, and now endorsed-without-attribution by the US is verifiability. that will take a global change, because in this world, the US is unaccountable and does not keep agreements.
“It is difficult to imagine what kind of security guarantee the United States can offer that could be trusted. A piece of paper is not going to do it. Nor, on its own, is the signing of a peace treaty formally ending the Korean War,” Elich said. “It may be that the Trump administration would be sincere in signing such a document. But the next US administration may very well have no compunction in abandoning it.”
https://www.rt.com/news/430265-us-korea-double-freeze-experts/

​Eleni found this, which may have the answer...
​One additional clue is that Henry Kissinger is said to be in Moscow right now, and Henry has been an adviser to Trump on policy to Russia ever since the 2016 campaign. He has been the voice urging an accommodation with Russia for a variety of geopolitical strategic reasons.  KA-CHING!  Putin needs to help on the Korean Peninsula, not just Xi.
https://russia-insider.com/en/politics/signs-are-clear-trump-putin-summit-being-prepared-possibly-2nd-week-july/ri23824?ct=t(Russia_Insider_Daily_Headlines11_21_2014)&mc_cid=7abaab8d3e&mc_eid=7a06d680cf