One concept I have found invaluable for navigating the increasingly incoherent—and explosive—social landscape is that of liminality. This is an anthropological term (coined in the early twentieth century by folklorist Arnold van Gennep) that refers to the quality of ambiguity or disorientation in the middle stage of religious rites. Later on, anthropologist Victor Turner used it to describe how ceremony masters usher ritual participants from one state to another, as in a coming of age ritual. The liminal stage is the intermediary one in which the initiate is on the threshold (limen) between his or her old status and a new, as-yet unknown one. More recently, the philosopher Rene Girard (among others), applied the term to sociopolitical and cultural conditions. And not a moment too soon, since we have now entered a time in history when ambiguity and disorientation have assumed epic proportions.
A few examples from the anthropological database: People trapped in a liminal situation are increasingly unable to act rationally, because the structures upon which their rationality is based have disappeared. (Check.) Being in a liminal state spells crisis for most people. Emotions run wild, making clear thinking all but impossible. (Check.) This leads to “mimetic” (imitative) behavior by those trapped in the liminal space. (Check. 4 out of 4.)
In the politics of liminality, the future is unknown; since no one has gone through the process before, there is no one to lead people out of it. This allows for false ceremony masters—politicians, pundits, sophists, and general snake oil salesmen—to fill the void and offer bogus solutions or ways out of the liminal state, to alleviate the disorientation and helplessness of others, thereby perpetuating liminality indefinitely. (Check. Check. Check. Check.)...
Right-wing libertarianism advocates the primacy of the individual; Left-wing socialism speaks for the primacy of the collective. Liminality is the collapse of categories, however, and as the category of “individualized sameness” expands to include more and more orientations and identifications, things like biological facts—and eventually any kind of fact, since facts, like numbers, tend to assert the reality of difference—become scapegoats sacrificed on the altar of oneness for all. The old values become the expendable “deplorables,” because the ideology of equality can only extend its assimilation agenda by erasing all differences between people. The final ritual sacrifice is the idea of individuality itself—or possibly the individual him- or herself, if Girard is right about human sacrifice being “the revelatory yet menacing dynamic that animates the whole of this civilization” (Things Hidden Since the Foundation of the World, p. 138).
http://kunstler.com/what-is-liminality-guest-essay-by-jasun-horsley/

The goal of the Cultural Revolution is to render all those who resist the ruling elites politically and socially invisible. The goal isn't to play nice and share power and wealth with the losers of financialization-globalization; the goal is to liquidate their influence in politics and society via relentless negative stereotyping by the elite-controlled mass media and an Orwellian reversal of identity that makes the dissenters into threats to democracy while elevating the elitist oppressors into selfless guardians of democracy--the exact opposite of reality.
In China's Cultural Revolution, the Red Guards mindlessly destroyed much of China's priceless cultural heritage as part of the deranged agenda of destroying whatever was traditional and valued by "counter-revolutionaries." Out with the old, in with the new--the time-honored pattern of power grabs masked by utopian goals.
If in doubt, purge, destroy, denounce. This is the Inquisition nature of all Cultural Revolutions.

"Fake News" clearly defined? Not yet. Refer to Cultural Revolution article, I think.
In the last few days I was looking around for stories that could illustrate what fake news actually is, and I had a nice collection, but then last night Robert Mueller of all people clarified what exactly fake news is better than I could have. At first the BuzzFeed crew that was caught staring straight into the headlights has a feeble response (what exactly was untrue in our article?), but was silenced by the WaPo of all publications: Mueller’s team said every bit of the article was false.
https://www.theautomaticearth.com/2019/01/the-news-about-fake-news-is-fake/

It's hard to escape the conclusion that the EU offered Britain such a bad deal because they knew it wouldn't be passed. Then, maximum pressure could be exerted on the UK to reconsider its decision to leave, or at least kick Brexit into the long grass, which is what having a second referendum would do...
The European establishment is desperate for Britain to reconsider Brexit. Internationalist ideals about 'preserving European unity', don't come in to it, this is all about protecting income streams.
Consider a few facts. If Britain does leave without a deal, then the EU as an institution would be considerably worse off. The UK has consistently been one of the top three countries that puts most into the EU budget (after Germany and France).
It is one of ten countries that puts more into the EU than it gets out. In 2017, the UK's net contribution was £9bn.
If Britain leaves, the EU faces a financial shortfall. In 2016, 16 countries were net receivers, including Donald Tusk's Poland. Little wonder that he regards Britain staying as "the only positive solution".
The very generous financial remuneration packages of EU officials might also be threatened by British withdrawal...
We also have to discuss fishing. The other EU countries do extremely well out of the Common Fisheries Policy, which provides them with access to UK waters.Belgian fleets get around half their catch from British waters! As reported in the Independent, the Common Fisheries Quota has for the past 34 years given 84% of the cod in the English Channel to France and just 9% to the UK. Overall, EU vessels take out around four times as much fish out of UK waters as British vessels take out of EU waters.https://www.rt.com/op-ed/449133-uk-brexit-democracy-eu-money/


Smithsonian Magazine this month published a stunning map detailing just how expansive the post-9/11 "war on terror" has become, demonstrating that contrary to the common assumption that it's "winding down" more than 17 years later, it actually continues to grow and has now spread to more than 40% of the world's countries.
This includes American military and support personnel engaged in ongoing missions in 80 nations on six continents, according to Brown University’s Costs of War Project at the Watson Institute for International and Public Affairs, which has recently calculated that since 2001 the US has spent $5,900,000,000,000 on war, mostly in places like Afghanistan, Iraq, Syria, Pakistan, and Yemen — where US military operations have become more or less permanent, with no consideration of ending them under any circumstances.
https://www.zerohedge.com/news/2019-01-19/smithsonian-map-shows-us-military-operating-over-40-worlds-countries 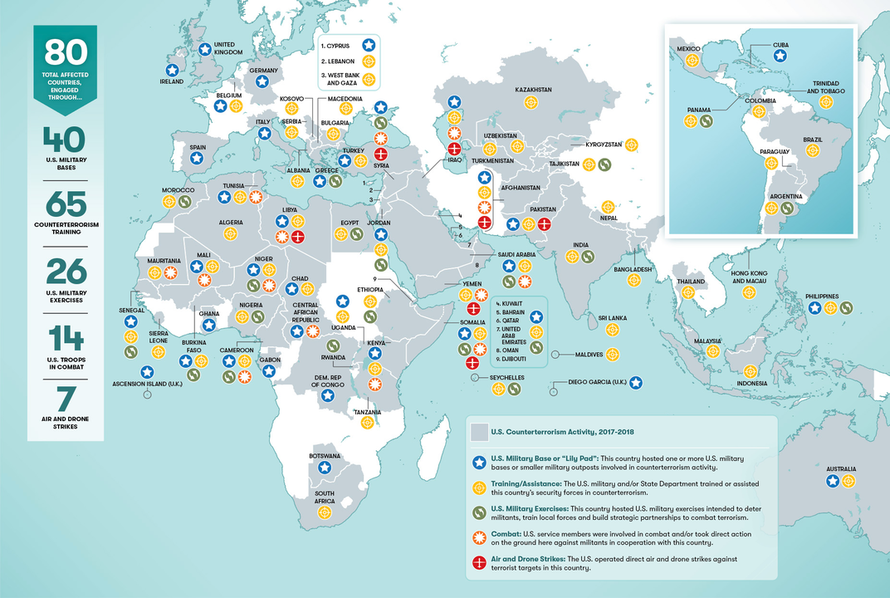 Hypersonic weapons are unlikely to become a bargaining chip (What does the US have that is worth trading these away for?)
https://orientalreview.org/2019/01/17/hypersonic-weapons-unlikely-to-become-a-bargaining-chip/

​Approaching Lightspeed​
Posted by John Day at 9:50 AM