Moon of Alabama asks:
Did John Bolton, President Trump's national security advisor, order an assault on the North Korean embassy in Spain to get an advantage in the nuclear talks?
On February 22 the embassy of the DPRK in Madrid was raided by a gang of thugs:
A group of men entered North Korea's embassy in Madrid, bound and gagged staff, before driving off with stolen mobile phones and computers, Spanish media has reported.
...Spanish police are investigating after El Confidencial reported a woman escaped the embassy last Friday screaming in Korean, prompting residents nearby to call police.
After she reportedly revealed staff were tied up and gagged, officers knocked on the door to investigate, but were met by a man who told them everything was fine.
Soon after, two cars left the compound at high speed, one of them carrying the man who had answered the door. Police did not enter the building, but staff walked out soon after the incident.e might be missing.
...Kim Hyok Chol was ambassador to Spain until September 2017, when the Spanish government expelled him and another diplomat following Pyongyang's round of nuclear tests and missile launches over neighbouring Japan.
The name Kim Hyok Chol sounds familiar. He recently was in the news when he led the North Korean delegation in the nuclear talks​...
​https://www.moonofalabama.org/2019/03/who-ordered-the-cia-to-raid-north-koreas-embassy-in-spain.html#more

​How many dollars of medical repair does it take to fix one dollar of knife-in-the-back? How much has been secretly spent already?
​At his Monday press conference, Mike Pompeo said “we’ve asked (Congress to appropriate) up to $500 million…to restore the economy of the Venezuelan nation (sic) (and) help Juan Guaido.”
He failed to explain the ongoing Trump regime coup plot, nor that it’s all about replacing Bolivarian social democracy with US-controlled tyranny – DLT and hardliners surrounding him wanting control over Venezuelan oil, gas, gold, and other valued resources.
It’s what the scourge of imperialism is all about, Guaido an illegitimate US designated puppet, usurper in waiting, traitor to Venezuela and its people, belonging in prison longterm for his highest of high political crimes.
What the Trump regime calls “democratic transition” in the Bolivarian Republic and other targeted countries is all about gaining imperial trophies – intolerant of democracy everywhere, notably at home.
https://www.globalresearch.ca/trump-regime-wants-500-million-intervention-venezuela/5671281

​Charles Hugh Smith:
How States/Empires Collapse in Four Easy Steps
The promises cannot be met, and so society decays into warring elites and competing constituencies.
There is a grand, majestic tragedy in the inevitable collapse of once-thriving states and empires: it all seemed so permanent at its peak, so godlike in its power, and then slowly but surely, too many grandiose, unrealistic promises were made to too many elites and constituencies, and then as growth decays to stagnation, the only way to maintain the status quo is to appear to meet all the promises by creating money out of thin air, i.e. debauching the currency.
https://www.oftwominds.com/blogmar19/empires-collapse3-19.html

​The British Parliament is poised to vote on whether it will accept No-Deal Brexit as an option 15 days from now.​
EU on no-deal Brexit motion: 'like Titanic voting for iceberg to move'
European commission makes clear no deal remains on table unless agreement is reached
https://www.theguardian.com/politics/2019/mar/13/eu-extend-brexit-talks-complete-barnier-brussels-assurance

​"Zugwang" is a German word for a situation in chess play, where to make the only possible move, assures defeat on the move after that. (Always the plan?)
​Well there is a way out of ‘Zugzwang Brexit’ – but it is the political equivalent of forfeiting the game.
The UK could revoke Article 50 and simply accept that the country has failed to reach political accord. May has twice failed to get her deal through the House of Commons and it seems likely that any further version, negotiated by any of her successors would meet a similar fate.
By revoking the mechanism by which a member state leaves the EU – dignity and sanity could momentarily be restored and the country could dampen the fuse of the ticking time bomb which Theresa May so recklessly and foolishly lit.
https://bylinetimes.com/2019/03/13/brexit-zugzwang-how-the-uk-can-escape-the-fierce-checkmate-stalemate-of-now/

​Can't have THAT!
​While a disorderly Brexit would hurt the EU, several top European officials warned that no delay would be granted unless Britain comes up with a clear and substantial plan, which it would try to achieve if given more time. But European bureaucrats may have more reasons not to tolerate Britain dragging its feet, MEP from Scotland David Coburn told RT.
If we end up staying beyond a certain period, we have to take part in the European elections. Then what you are going to see is 73 Nigel Farages returned to the European Parliament. It would make the government of the EU impossible. They would probably want to throw us out, I should think.
https://www.rt.com/uk/453785-brexit-european-parliament-election/

A simple but important study by Luciano Celi shows what is the real energy return that oil companies manage to attain. Much smaller than you would have believed, in several cases it is today well below 10. Which means that renewable energies already produce a larger EROI than oil and gas. No more excuses for not switching to renewables as fast as possible! And we have to do it fast because, as Celi shows, we are on the edge of the Net Energy Cliff of fossil fuels...
The industrial society experiences Net Energy, not EROI (energy return on energy invested), decline. As shown in the graph above, there is a strong non-linear relation between Net Energy and EROI. For a long range of EROI values, say from 100 to 10, the Net Energy is declining very slowly. Presently although the EROI decline is quite clear the Net Energy is still well above 90%. The society feels pretty safe. The problem is that we are walking along a cliff and it is increasingly urgent to make an energy transition, before finally ending up in the abyss.
https://cassandralegacy.blogspot.com/2019/03/the-real-eroi-of-crude-oil-smaller-than.html 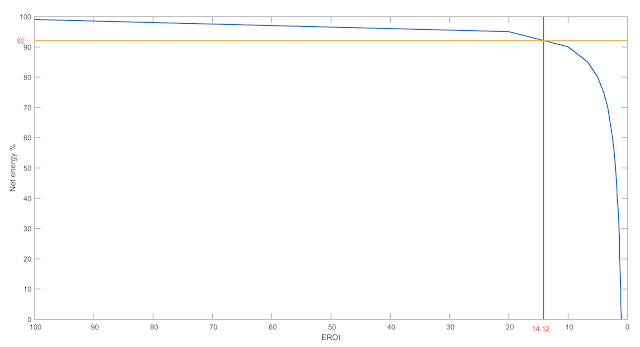 ​(The US military uses the most.)
Resource extraction responsible for half world’s carbon emissions
Extraction also causes 80% of biodiversity loss, according to comprehensive UN study
https://www.theguardian.com/environment/2019/mar/12/resource-extraction-carbon-emissions-biodiversity-loss

Coca-Cola has revealed for the first time it produces 3m tonnes of plastic packaging a year – equivalent to 200,000 bottles a minute – as a report calls on other global companies to end the secrecy over their plastic footprint.
https://www.theguardian.com/business/2019/mar/14/coca-cola-admits-it-produces-3m-tonnes-of-plastic-packaging-a-year

​First, review scientific data supplied by Bayer/Monsanto about whether this is carcinogenic enough to do it.
If not, then no need to look at whether they are criminals producing said data.​
"Unpoisoning" a thoroughly poisoned well?
SAN FRANCISCO (Reuters) - A trial in which a California man alleged his use of Bayer AG’s glyphosate-based Roundup weed killer caused his cancer went to a federal U.S. jury after lawyers for both sides delivered their closing arguments on Tuesday...
Hardeman’s case has proceeded differently from the earlier trial, with an initial phase exclusively focused on scientific facts while omitting evidence of alleged corporate misconduct by company representatives.
Following the first phase, the six jurors in San Francisco federal court were asked by U.S. District Court Judge Vince Chhabria to decide whether Roundup was a “substantial factor” in causing Hardeman’s cancer.
https://www.reuters.com/article/us-bayer-glyphosate-lawsuit-idUSKBN1QT31G