Charles Hugh Smith looks at implications for how the exercise of power actually works in the western empire.
So exploiting vulnerable girls served the "national interests" and therefore it's all OK. If we're supposed to believe this is the heart of the matter, how is America any different from a corrupt developing-world kleptocracy organized to gratify a handful of oligarchs and their cronies?
Or perhaps the "he was an intelligence asset" is just a tissue-thin cover for a much more destructive reality: those at the top of the American state have no moral compass at all. That honeypots and blackmail are standard-issue tools of spycraft targeting individuals in the employee of other nations is a given, but presumably the CIA doesn't recruit 14-year girls as bait (although nothing should surprise us at this point)...
Many of us sense an existential crisis is close at hand, and the U.S. is ill-prepared for such a crisis. Possibilities broached by others include a global war, a break-up of the U.S. into regional states, or a civil war of some sort.
My bet is on a moral and financial crisis in which the ruling elites and the federal state lose their legitimacy, i.e. the consent of the governed. As their Federal Reserve "money" loses value and the corruption of the ruling elites and the government they control reaches extremes, the citizenry will no longer heed their corrupt, self-serving "leaders."
http://charleshughsmith.blogspot.com/2019/08/who-protected-epstein-for-decades-and.html

What has been turning over in my mind in the hours before dawn today is the question of how high in the global power structure Jeffrey Epstein was (or even "is"). The official story is that he was a very high class playboy pimp to global elites with a network of powerful "friends", like Clintons and UK royals, and Al Gorem and Ehud Barak and ad nauseum. We know that Wexner of Victoria's Secret just handed over hundreds of millions of dollars of assets to Epstein to "manage". Wexner looks like Gollum. What's up with that? It is there to observe that Epstein was at a fulcrum of vast global influence on the workings of the gigantic machinery of empire. What pay-grade does that make him? Above or below Bill Clinton; Hillary Clinton, Barack Obama, Al Gore, George W. Bush, Dick Cheney? I ask because it is a big question how protected the upper levels of elite imperial functionaries are.
How protected do they have to be, and how secure in that protection, to do the horrific crimes they do every day, entitled by their positions?
How does that protection get proven to them? The Clintons remain quite protected, though the list of Arkancides below is pretty damned long.
It seems that the first Epstein story is that he suicided in prison, and everybody is scoffing at that, for all of the right reasons. It never happened in that facility before. He was their highest value prisoner, and the sheets are made of heavy toilet paper. The back up story is obviously "Arkancide", that the hand of power reached out and snuffed Jeff to shut off the court discovery that has started to reveal his blackmail evidence on so many elite functionaries of power, whose purview includes ordering fancy hits.
There is another, perhaps even more disturbing possibility, which is that Jeffrey Epstein is high enough in the works of the real machinery of power, that he has to be elaborately saved from all consequences, to keep others at his level assured enough to keep doing their ugly jobs.

Here is a site that Tom got an image from yesterday.  https://www.reddit.com/r/conspiracy/comments/coixpt/i_have_nothing_witty_to_say_other_than_this_whole/
You see the image on the site, and can look at the images below, one of which is the same, as I send this. The other is the image the site had yesterday. The faces on yesterday's image don't look the same when you examine specific anatomic details, like ear creases, nose shape and eyebrows. I found the ears particularly different. Today's pictures look about the same. One is a fresh photo, and the photo on the gurney has been mirror flipped and maybe photo-shopped a tiny bit.
What are the implications if Jeffrey Epstein was a highly enough talented functionary of imperial power to make it worthwhile to murder a body double on a tight time schedule, sneak Epstein out of a monitored jail cell and sneak the freshly killed body in, to discover and fail to resuscitate?
What are the implications for New York? What for the US? What for the poor Coroner, who has yet to release a report, and seems to be getting a lot of help-and-advice?
Most folks know how JFKs autopsy was faked, moved from doctors in Dallas, to a military hospital in Bethesda, with inexperienced doctors doing it, and generals in the room. Pictures of the wounds were swapped out and so on.  https://www.fff.org/2018/09/14/military-fraud-in-the-jfk-autopsy/
I am very interested in how much proof is going to be provided that the corpse is that of Jeffrey Epstein. If that is not absolutely proven in multiple ways, I will not believe that it is. "DNA report" is not going to convince me.
Fingerprints, dental x-rays, close up photos not photo-shopped, body measurements, hands, all those details are important for independent and widespread verification of identity. 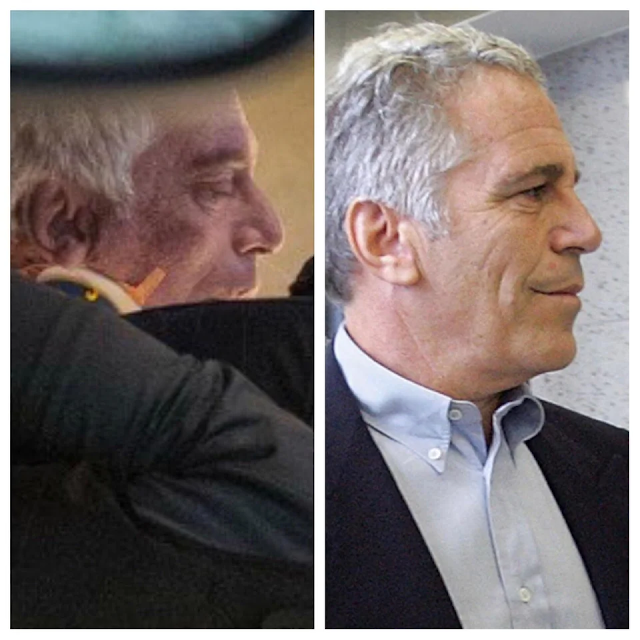 Here is a currently complete list of Clinton friends and associates who died mysteriously or committed suicide just before testifying.
We can include Jeffrey Epstein for now. Seth Rich is mentioned, but doesn't get a number. It would be #47. Epstein would be #48.
https://www.thegatewaypundit.com/2019/08/here-it-is-complete-list-of-clinton-associates-who-allegedly-died-mysteriously-or-committed-suicide-before-testimony-including-jeffrey-epstein/

Anyone in his position would say this, right?
AG Barr Says Epstein Case Will Continue, Says ‘Co-conspirators Should Not Rest Easy’
https://www.theepochtimes.com/ag-barr-says-epstein-case-will-continue-says-co-conspirators-should-not-rest-easy_3039333.html

Ghislaine Maxwell has been located:
The 57-year-old British heiress was discovered laying low in a $3 million "secluded oceanfront property at the end of a long private road" in New England with her boyfriend, 43-year-old tech CEO Scott Borgerson, according to the Daily Mail.

Out of Network Charges Apply:
​ ​For Gabbard, the road to Damascus began with her initial deployment to Iraq and continued through her 2009 deployment to Kuwait. Having enlisted in response to the terrorist attacks of 9/11, Gabbard instead found herself engaged in a “regime change” war in Iraq predicated on the lie of weapons of mass destruction. It then continued through the halls of Congress, following Gabbard’s successful bid for office in 2011. From her position as a member of the Armed Services Committee, she watched as the al-Qaeda enemy she’d fought in Iraq morphed into ISIS and spread its influence into Syria.
​ ​Over the next few years, Gabbard saw how the Obama administration began, in her words, “funneling weapons and money through Saudi Arabia, Turkey, Qatar and others who provide direct and indirect support to groups like ISIS and al-Qaeda” in an effort to overthrow the Assad regime. “If you or I gave money, weapons or support to al-Qaeda or ISIS,” Gabbard declared via Twitter, “we would be thrown in jail. Why does our gov get a free pass on this?”
​ ​For someone who watched her fellow soldiers die fighting al-Qaeda in 2005, the Obama policy of supporting terrorists, whether directly or indirectly, as part of a new regime change war against Syria was a betrayal of that sacrifice.

​Tulsi Gabbard remains low in "Approved" DNC Polls, despite her popularity​.
​ ​Since June 28 (the first day of the time in which polls can be counted towards September qualification), Gabbard has hit 2% or higher in eight different polls, which is more than the already-qualified Klobuchar and Yang.
​ ​Yet, the DNC only counts one of those as an approved poll, meaning Gabbard still needs three more polls to her resume. If she can’t do that, missing the September debates will be a de facto death blow to her campaign.
https://thelibertarianrepublic.com/tulsi-gabbard-low-dnc-polls-popularity-trends/

​Caitlin Johnstone:
​  Mass media narrative managers have been throwing a fit ever since Senator Bernie Sanders criticized The Washington Post for providing unfair coverage of him at a New Hampshire town hall on Monday.
"Anybody here know how much Amazon paid in taxes last year?" Sanders asked the crowd.
"Nothing!" the crowd answered back.
"See, and I talk about that all of the time, and then I wonder why The Washington Post, which is owned by Jeff Bezos, who owns Amazon, doesn't write particularly good articles about me. I don't know why," Sanders said.
The reaction has been swift and furious. Outlets ranging from NPR to CNN to Fox Newshave claimed that Sanders' comments are "Trump-like" and "echoing Trump". CNN's segment on the story insinuated multiple times that there is no evidence for Sanders' claims of biased coverage by WaPo...
​ ​During the hottest and most contentious point in the 2016 presidential primary, Fair.org documented the fact that The Washington Post published no fewer than sixteen smear pieces about Sanders in the span of sixteen hours. This sixteen-hour window included Sanders' debate with Hillary Clinton in the tightly contested state Michigan, where Sanders went on to score a narrow but hugely significant upset victory. To say that WaPo has a history of bias against Sanders is not conspiratorial, Trumpian or lacking in evidence, it's an intellectually honest acknowledgement of an undeniable and well-documented fact.
https://caitlinjohnstone.com/2019/08/14/msm-smears-sanders-for-saying-msm-smears-sanders/#respond

In the UK, the latest poll says 54% of Britons want "Brexit by any means". They shall probably have that. What will it mean?
https://moneymaven.io/mishtalk/economics/hello-remainers-54-say-the-prime-minister-should-deliver-brexit-by-any-means-y8YB-3KuV0-SJhVMAruQEA/

Finian Cunningham:
Since Boris Johnson took over as Britain’s new prime minister three weeks ago he has been holding intensive phone calls with US President Donald Trump, according to media reports. There is a buzz that the much-vaunted “special relationship” between the US and Britain is finding new ardor...
The intensity of renewed alignment between Washington and London saw Trump’s National Security Advisor John Bolton visit the UK capital this week. During two days, Bolton had a flurry of meetings with top figures in Johnson’s hardline Brexit cabinet. It was reportedly the most senior American delegation to Britain since Johnson took over in 10 Downing Street on July 23.
Last week, Dominic Raab, the new British foreign secretary, was in Washington where he was greeted at the White House by Trump. Raab subsequently gushed to media about how “effusive” the American president was towards Britain’s plans under Johnson to quit the European Union on October 31 without a departure deal. The so-called “hard Brexit” option...
​ ​Johnson and his government are assiduously courting the Trump administration. London needs to find favor with the White House in order to avail of a US-British trade deal as a substitute for the EU, which has up to now been Britain’s biggest market for imports and exports.​..

​  What this all means is that Britain is set to pander even more than usual to Washington’s imperious foreign policy. The Anglo-American axis has been responsible for numerous criminal wars in the Middle East and countless other subterfuges. Washington and London have worked together to escalate hostility and tensions towards Russia.

In the 1920s and 1930s The Bureau of Home Economics did many thousands of taste test experiments and promotions to influence and shape the American diet and the products of American agriculture. The goal was something like market excellence. This is very interesting.
By 1931, according to the Chicago Daily Tribune, Alexander had "tasted and tested the left hind legs of more than 2,300 lambs."