The news this morning turns promptly to the fallback position, more believable, that Jeffrey Epstein was murdered in his cell, and gently hung to dry with some flimsy safety-sheets. (The face of the corpse did look like it was bruised against floor or wall, and it looked like blood in the ear canal, which comes from violence, not self strangulation.) Now, it appears that several bones in the neck were broken, including the hyoid bone, just above the Adam's apple. That's a sign of assault, though it could be broken by a traditional drop-hanging execution, which would break the neck by design.
What i do not see yet, is any evidence that this is the corpse of Jeffrey Epstein.
His brother identified it as Jeff. Did he smile?
https://thehill.com/homenews/news/457504-report-epstein-autopsy-finds-several-broken-bones-in-neck-deepens-mystery

EPSTEIN IS DEAD; LONG LIVE EPSTEIN?  Helen of DesTroy
The possibility exists that Epstein isn’t actually dead. A 4chan post purporting to be from an MCC employee, posted before news of Epstein’s alleged demise was made public, claims the disgraced financier was taken to the jail’s medical unit just hours before his alleged suicide and points to a suspicious van coming and going, undocumented per the prison’s usual procedures, at the same time as his potential route of escape. Comparisons of “Epstein”’s corpse to images of the living Epstein appear to show completely different ears, a unique and difficult-to-fake body part. Others have questioned why there was a photographer on hand to snap photos of the body leaving the prison in the first place and pointed out the article accompanying the photo referred to a "body believed to be Epstein's." Epstein's brother allegedly identified his body, but if there was a plot, he'd be in on it, ready to milk the jail for millions in a wrongful death suit - a possibility Barr seems to be setting in motion by attacking MCC for "failing to adequately secure" their famous charge. The "celebrity pathologist" who observed the autopsy on behalf of Epstein's lawyers also "helped investigate" the assassinations of JFK and Martin Luther King, Jr. There is no smoking gun, but there is an Epstein-sized plausible-deniability gap to slip through.  http://helenofdestroy.com/index.php/112-who-killed-jeffrey-epstein 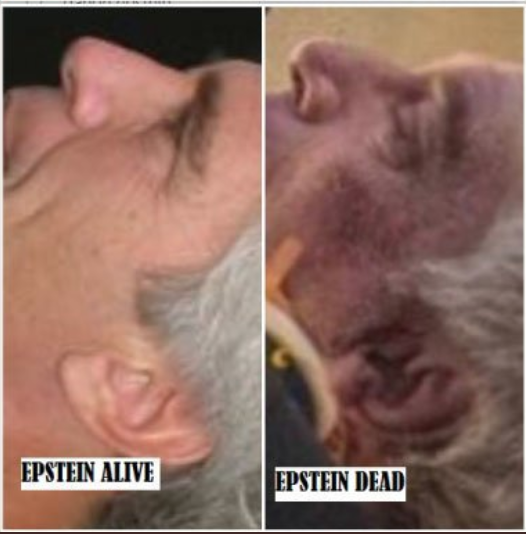 "Epstein's Body" has already been claimed by an "unnamed associate".
Possible follow on comment tomorrow:
"Jeff dearly wanted his brain and penis to be frozen in suspended animation for future generations, but since that's not possible, we just cremated him."
https://www.nbcnews.com/news/crime-courts/jeffrey-epstein-s-body-claimed-unidentified-associate-n1042551

OK, then, Ghislaine Maxwell is still missing...
Tech CEO and Council on Foreign Relations (CFR) member Scott Borgerson has refuted a Daily Mail report that Jeffrey Epstein's former "best friend" and alleged madam, Ghislaine Maxwell, is living at his "secluded oceanfront property" in New England, according to Axios.
"I'm in Europe right now and there isn't anyone in my house but my cat," Borgerson told Axios, adding that he's asked the local police to check the house for any signs of the 57-year-old Maxwell. He also said that while he knows Maxwell, the two are not dating.
https://www.zerohedge.com/news/2019-08-15/tech-ceo-denies-epsteins-alleged-madam-living-his-oceanfront-mansion

The Mises institute usually has an Ayn Rand axe to grind, but not in this story, an excellent analysis of the rise and stagnation of the $US as global reserve currency since WW-2. The trajectory is predictable. The easy and cheap goods that flood the country that prints the reserve currency, kill the native industry of that country, while funding global military expansion and hedonic decadence at home. Then stuff resets.
https://mises.org/wire/why-dollar-rules-world-%E2%80%94-and-why-its-reign-could-end

Classes start September 2.
The riots in Hong Kong are about to end.
The protests, as originally started in June, were against a law that would have allowed criminal extraditions to Taiwan, Macao and mainland China. The law was retracted and the large protests have since died down. What is left are a few thousand students who, as advertised in a New York Times op-ed, intentionally seek to provoke the police with "marginal violence":
Such actions are a way to make noise and gain attention. And if they prompt the police to respond with unnecessary force, as happened on June 12, then the public will feel disapproval and disgust for the authorities. The protesters should thoughtfully escalate nonviolence, maybe even resort to mild force, to push the government to the edge. That was the goal of many people who surrounded and barricaded police headquarters for hours on June 21.
https://www.moonofalabama.org/2019/08/violent-protests-in-hong-kong-reach-their-last-stage.html#more

America's Hybrid War Against China Entered a New Phase (Quite Chinese-partisan in flavor, but useful information and perspective.)
https://www.globalresearch.ca/americas-hybrid-war-against-china-has-entered-a-new-phase/5686429

How much participation will this guy get? Will Hong Kong residents actually stage a run on mainland banks?
Prominent Hong Kong pro-independence political activist Chen Haotian has called for a run on Chinese banks, asking that everyone withdraw their money on the same day.
https://www.zerohedge.com/news/2019-08-15/hong-kong-activist-leader-calls-run-bank

More good analysis on India's Hindu Nationalist Invasion of Kashmir:
It is difficult to see how India’s inflexible opposition to international mediation can benefit India or — much more importantly — the twelve million inhabitants of Indian-administered Kashmir.  The decision by Prime Minister Modi to annul Article 370 of the Constitution and thus abolish the special status of Indian-administered Kashmir was simply a movement in his ultra-nationalist campaign to ensure supremacy of Hindus. Since 1948 the Article has meant that the territory’s citizens have their own Constitution, their own laws, and the right to property ownership, with non-Kashmiris not being permitted to buy land.  It is this last that is a major life-changer for the region, because southern Hindus will now be encouraged to by land and property, and gradually (or perhaps not-so-gradually) displace the Kashmiris themselves.
Modi promised “new opportunity and prosperity to the people” — but if he thought, before he made the announcement about annulment of citizen’s rights, that this would be greeted with enthusiasm and that his policy would indeed benefit the people of the territory, then why did he send “tens of thousands of Indian troops . . . in addition to the half a million troops already stationed there”?  Why did the Central Government “shut off most communication with [the territory], including internet, cellphone and landline networks”?
https://www.strategic-culture.org/news/2019/08/13/mediation-is-the-way-forward-for-kashmir/

The British territory of Gibraltar will on Thursday release an Iranian oil tanker seized by Royal Marines in the Mediterranean in July, the Sun newspaper reported, citing sources close to Gibraltar Chief Minister Fabian Picardo.
​ ​Picardo would not apply to renew an order to detain Grace 1, the report said, adding that he is now satisfied that the oil tanker is no longer heading to Syria.

You may not have heard of Ellen Brown but she is without a doubt the world’s most persistent advocate for public banking.
​ ​So what, you may ask! What she is fighting for is a change in our banking system so that it serves the people and not the bankers. If we were to do so we could have a society with no public debt, no need for austerity policies, average people would live better lives, education would be free.
​ ​The difference between public banking and private banking is simple. When the banks are privately owned, a few senior bankers and the shareholders reap the benefits. With public banking everyone shares the benefits.
​ ​One of her blogs is entitled How Banks Secretly Create Money and she quotes Sir Josiah Stamp who was President of the Bank of England and the second richest man in Britain in the 1920s. He addressed the University of Texas in 1927:
​ ​“The modern banking system manufactures money out of nothing. The process is perhaps the most astounding piece of sleight of hand that was ever invented….. if you want to continue to be the slaves of bankers and pay the cost of your own slavery, then let bankers continue to create money and control credit.”

​Responding with Love to a Civilization in Crisis (Many good points I agree with. I expect both collapse and creation. I think the tsunami is already lapping at our feet. I'm at work.)​
O​n average civilizations have lasted about 336 years. Most of us are aware that modern civilization has become deeply unsustainable, but many do not realize that we are heading toward civilizational collapse. Today’s civilization is increasingly complex, while social inequalities are deepening, our environmental impact is growing, and the climate is changing. When all four of these indicators rise together, the likelihood of collapse is greater.
​ ​The collapse of modern civilization marks a decisive moment in human history. What we face is a turning point between two futures: The Great Transition and the Great Unraveling. The Great Transition describes a future in which society is comprehensively reorganized to sustain itself in dynamic equilibrium with the Earth’s systems. Humans have never before sustainably organized a global society at such a high level of complexity, but for the first time in history it may be possible to live in a globally interconnected, technologically advanced, sustainable civilization - what some call an ecological civilization...
​ ​Often, responses to collapse are fractured along single issues, narrow theories of change, disciplinary boundaries, national borders, and in some cases identity politics. This fracturing reveals a deeper problem: a crisis of perception about the nature of human beings and our relationship to each other and the world.
​ ​Today’s culturally dominant worldview is based on a fundamental dualism and an atomistic view of life that privileges individualism and independence over interdependence. This view of separateness or otherness has affected the ways we relate to each other and to the non-human world. It allows one seemingly arbitrary category to be culturally valued over another: male over female, mind over body, reason over emotion, the universal over the particular, human beings over nature, ‘civilized’ over ‘primitive’. Historically, this has led to the worst forms of injustice, including sexism, racism, colonialism and ecocide. And it has enabled crises of oppression, exploitation, extractivism, and the devaluing of life in general.
​ ​Positively addressing the collapse of modern civilization thus calls for a shift away from a worldview based on separation and dualism to an ecological systems view based on interconnections. The systems view provides our current best understanding of nature, but practicing it requires not just intellectual engagement or reflection but fundamentally changing the way we experience and relate to the world. This not only calls for a shift in consciousness, but also a new way of understanding how transformation happens.
​ ​The truth is, we need new cultures of practice that integrate personal and social transformation without maintaining a false divide between the inner and outer, as if they represented two totally different spheres. The systems view allows us to become more aware of the non-separation between these spheres, and the necessity to build care-based systems and structures that enhance the quality of our relationships to each other, to non-humans, and to the life cycles of nature.