BlackWhite,
"You can't talk about hope if you can't see reality.
Reality's pretty bleak, but that's the starting point."
Chris Hedges
American Psychosis, short video. Thanks Jeremy
https://www.youtube.com/watch?v=14MGbEYQZ2Y&feature=youtu.be
​  ​Senate Republican leader Mitch McConnell on Monday issued a tacit rebuke of controversial Rep. Marjorie Taylor Greene, slamming the Georgia Republican's "loony lies and conspiracy theories" as a "cancer" for the party.
​  ​"Loony lies and conspiracy theories are cancer for the Republican Party and our country," McConnell said in a statement. "Somebody who's suggested that perhaps no airplane hit the Pentagon on 9/11, that horrifying school shootings were pre-staged, and that the Clintons crashed JFK Jr.'s airplane is not living in reality. This has nothing to do with the challenges facing American families or the robust debates on substance that can strengthen our party."​   ​ (Or maybe that's exactly what it has to do with, Mitch.)
https://www.cnn.com/2021/02/01/politics/mcconnell-marjorie-taylor-greene-cancer-republican-party/index.html
​  ​In 2006 Loose Change, a 70 minute 9/11 Truth documentary was the most watched download ever on YouTube.
Now you can see a 1 minute trailer and a lot of articles about how it dangerously-misinformed a generation (who believe things like a high-penetration cruise missile hit the Pentagon where the Office of Naval Intelligence was investigating the missing trillions of dollars that Rumsfeld had just mentioned, and that WTC-7 fell into its own footprint in free-fall time, from fires in some wastebaskets, er, from controlled-demolition, and so on).​ I still recommend it. Mitch McConnel does not recommend it. It's "cancer".​
https://www.youtube.com/watch?v=9qIATAMWq3E
​  ​With lower energy consumption, many things tend to go wrong at once: The rich get richer while the poor get poorer. Protests and uprisings become more common. The poorer citizens and those already in poor health become more vulnerable to communicable diseases. Governments feel a need to control their populations, partly to keep down protests and partly to prevent the further spread of disease.
https://ourfiniteworld.com/2021/01/12/2021-more-troubles-likely/ 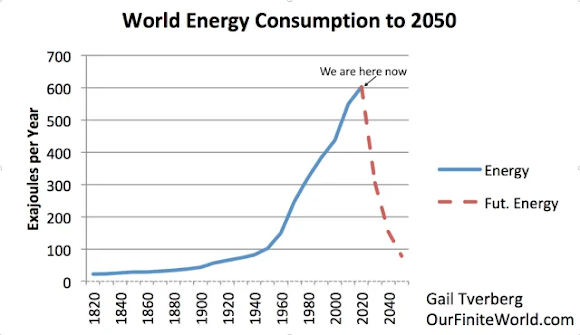 ​  ​We report three major and confronting environmental issues that have received little attention and require urgent action. First, we review the evidence that future environmental conditions will be far more dangerous than currently believed. The scale of the threats to the biosphere and all its lifeforms—including humanity—is in fact so great that it is difficult to grasp for even well-informed experts. Second, we ask what political or economic system, or leadership, is prepared to handle the predicted disasters, or even capable of such action. Third, this dire situation places an extraordinary responsibility on scientists to speak out candidly and accurately when engaging with government, business, and the public. We especially draw attention to the lack of appreciation of the enormous challenges to creating a sustainable future. The added stresses to human health, wealth, and well-being will perversely diminish our political capacity to mitigate the erosion of ecosystem services on which society depends.
https://www.frontiersin.org/articles/10.3389/fcosc.2020.615419/full
​Charles Hugh Smith:​
It didn't have to be this way, but this is the reality we must now face: truth is fatal to fraud, and our entire financial-political system is a fraud.
​  ​The stock market has just been punctured by the thin blades of truth. It is fatally wounded but nobody dares notice. The wounds are barely visible, but the internal damage is mortal. The stock market is already stumbling and will soon crash.
​  ​The banquet's participants ignore the faltering market because the rules are we never reveal the truth, or acknowledge it, or discuss it, no matter how obvious, because truth is fatal to fraud.
https://www.oftwominds.com/blogjan21/stocks-dead1-21.html
​OK, guess which!
Syria - The U.S. Controlled Al-Tanf Serves As ‘ISIS’ Base - Truth Or Propaganda?
https://www.moonofalabama.org/2021/01/syria-the-us-controlled-al-tanf-serves-as-isis-base-truth-or-propaganda.html#more
329 Deaths + 9,516 Other Injuries Reported Following COVID Vaccine, Latest CDC Data Show
The numbers reflect the latest data available as of Jan. 22 from the CDC’s Vaccine Adverse Event Reporting System website. Of the 329 reported deaths, 285 were from the U.S., and 44 were from other countries. The average age of those who died was 76.5.