​  Texas is cold, colder than anything on record, overall, for this time of year, and snowed-in, which never happens for more than a day here in central Texas. This combination, and the long duration, 6 days already, and counting, make this event an order of magnitude or more beyond the parameters that engineers considered when designing safety measures. Something similar, but milder and more localized happened in the Dallas, Fort Worth area during super bowl 2011, I hear, but I don't recall it. I didn't live there.
The cost to keep a temperature differential from inside to outside matters in several ways. Texas houses and businesses often pump something like 35 degrees, between 105 outside and 70 inside during the summer, with AC units, which are heat pumps. Heat pumps are pretty efficient. They might use 1 unit of electricity to pump 9 equal energy units of heat outside. Gas burning furnaces and stoves are pretty good. Stoves don't waste any heat. They are unvented heaters. CO2 does build up with lots of burning over a long time. Lots of us lived with unvented heaters for many years in the old days. Gas furnaces won't work when the electricity is out. Stoves will. You may need a match.
Electric heating is different. It does not pump 9 units of heat for every equal unit of electricity.
Resistive electric heaters make 1 unit of heat for 1 unit of electricity. Resistive electric heaters take 9 times as much electricity to cover that 35 degree differential, and a lot of us are trying to get 65 degrees inside with 15 degrees outside this week.
A lot of people need 12 times as much electricity as during summer peak load.
About 40% of Texas households are currently without electricity. We just had about 20 hours without electricity, after 8 hours without last Thursday evening and night. We are fortunate to have a gas stove, and an older one with a gas pilot light, so we used it and blanketed up overnight, and sweatered up in the daytime.
We have been able to cook. We have nice fresh produce we harvested ahead of the deadly cold.
We gave some away, too. Not the spinach. Jenny cooked lovely Saag paneer 2 days ago, and I made spinach omelets with mushroom and cheese sauce today. Still tasting it...
I carried in frozen rainwater buckets to put in the refrigerator and freezer, which became "the icebox", which was fun to say.
I put them back outside a while ago when the power came on. They are "recharging".
​  Without internet, I read most of Charles Hugh Smith's latest book, print version, by a window, A Hacker's Teleology: Sharing the Wealth of Our Shrinking Planet. I have other books I still need to read...
There is a lot of blame being cast in Texas, for political purposes, but the fact is that nobody would have budgeted for something this extreme. Now they will need to.
Many natural gas wellheads are frozen and some of the pipelines are not working right in the extreme cold. Remaining natural gas power plants are burning all the gas they can get, and competing with residential users for it.
A lot of natural gas plants have been shut down in recent years, but they are the only kind of power plant that can ramp up fast to meet changes in electrical generation requirements. Some plants will need to be renovated and brought back online.
It will cost more most days, but it will provide resilience for times of severe need. Texas has the gas...
There is no wind or solar electric  power currently online, due to ice storms last week and no thaw since then.
We got down to 8 degrees F, with a wind, yesterday morning, and 6 F this mo​rning. I've never experienced it getting below 16, and that was the winter of 1983-1984, when every palm tree in Houston died.
All of our "cold tolerant" Mexican avocado seedlings, now over a year old, are in the garage in their pots. The coating of ice from Thursday has melted. We put them in there before the temperature dropped below the mid 20s. That's too cold.
No point killing them all. I just want to see which ones do better.
We're not sure at all if any of the 15 Mexican avocado trees in Yoakum will live, though we cut up a roll of white plastic to wrap them with in sub freezing wind Saturday (Thanks Jenny!). We have been making deer-deterrence cages of chicken wire for a month, so that helps hold the wraps, but makes them harder to do and to tie. Jenny and I drove back to Austin after that chore, and harvesting the vegetables.
The "ghost trees" are pictured below.
We hope some live, but people are proud of the few that lived through 1983-1984, very proud. 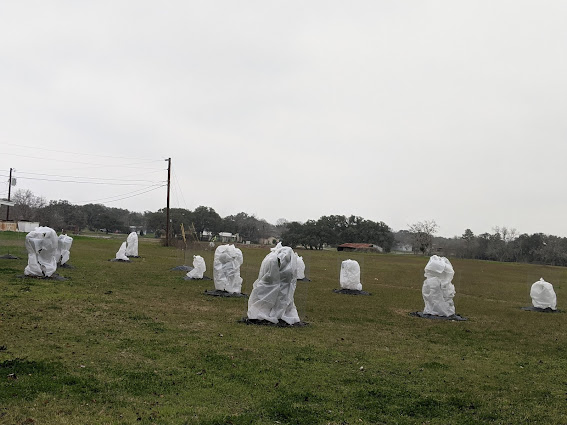