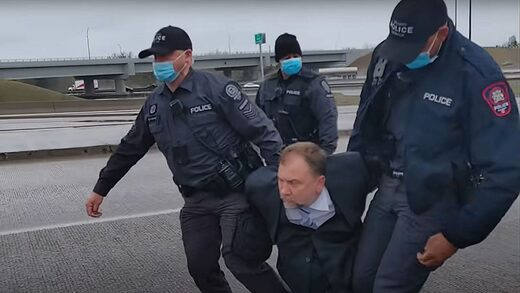 https://www.sott.net/article/452531-Canadian-pastor-who-prevented-police-from-shutting-down-Easter-service-arrested-and-charged-with-organizing-an-illegal-in-person-gathering
The Jackpot Chronicles Scenario #4: Atlas Shrugged​  (Um, ok, but how can you assume there will be a working internet or crypto​currency​ under such conditions?)​
​  ​It occurred to me that I never did finish the final instalment of last summer’s Jackpot Chronicles, wherein I posited four possible post-Covid scenarios.​..​
​ ​Under the Atlas Shrugged scenario, deglobalization is just one of numerous motivating factors, but it’s mainly an outcome of a larger dynamic where all non-ruling factions in society lose faith in the prevailing structure of Neoliberal Globalism (a.k.a “Mr. Global”). With Mr. Global’s viability in question, people begin to look for the exits.
​  ​This begins to occur on two fronts. What Vilfredo Pareto called “the non-governing elites” begin to realize that the system which used to accommodate them, even rely on their tacit support, is now becoming hostile toward them. At the very least, the ruling elites are undermining their interests. This is part of the dynamic of Peter Turchin’s “elite overpopulation” that we looked at recently.
​  ​The other front is the comparatively powerless underclass, which, in pace with Pareto’s Theory of Elite Cycles, lose their moorings and standing within the system they are expected to adhere to. The social contract no longer seems to be a matter of middle-class protections and living standards but instead becomes starkly authoritarian and one-sided. What is clear is that the existing institutions are now functioning to defend the position of the overclass, not to uphold the rights and liberties of the underclass.
​  ​The culmination of multiple super-cycles (Pareto’s Elite Cycles, Turchin’s long term dynamics of sociopolitical instability, debt, a Fourth Turning, and a Maunder Minimum for good measure) combined with an accelerated onslaught of technological innovation: Internet, crypto-currencies …biotech? Nanotech? Micro nuke? Fusion? Quantum computing? We have all the necessary components for a complete breakdown of existing institutions and the total loss of legitimacy of the current governing elite class.​..
​  ​In spite of this, Mr. Global’s prevailing policymakers and governance structures will frantically maneuver and spin narratives of fear and fantasy in order to keep the existing system on the rails.​..
​  Nation state establishments within the twilight of a declining system should be thinking deeply about their place in the new reality of network states, not pontificating how they will lord over this new landscape. The coming system will be multipolar in not just the geopolitical dimension, but across cyberspace and the network dimensions as well.
https://bombthrower.com/articles/the-jackpot-chronicles-scenario-4-atlas-shrugged/
​Gotta' protect freedom from communism, after all...​
The FCC Aims to Stem Robocalls But ATT, Verizon and T-Mobile Say Wait
The big phone companies have asked the FCC to delay measures to block robocalls​.
​https://mishtalk.com/economics/the-fcc-aims-to-stem-robocalls-but-att-verizon-and-t-mobile-say-wait
US Declares State Of Emergency To Keep Gasoline Flowing After Colonial Fails To Restart Hacked Pipeline
https://www.zerohedge.com/commodities/gasoline-prices-soar-after-colonial-gives-no-timetable-hacked-pipeline-restart
With fears growing that the Colonial shutdown could last for much longer than initially expected, with some analysts warning that a 5-day shutdown could lead to sharply higher prices, and the Biden admin activating a state of emergency to make sure that critical gasoline supplies continue to flow up the eastern seaboard, moments ago Colonial Pipeline issued an update on its attempts to restore operations, saying that "segments of our pipeline are being brought back online in a stepwise fashion" and that the goal now is to "substantially" restore operational service by the end of the week.
https://www.zerohedge.com/energy/colonial-says-pipeline-segments-being-brought-back-online-goal-service-be-substantially
The Middle East is reorganizing​  Thanks Eleni
The Middle Eastern states, divided not by themselves but by the powers that colonised the region, are reorganising themselves according to their own logic. Of course these new alliances are still fragile, but the West will have to deal with them.​..​
​  ​These changes, if they can be sustained, will take time. However, the United Arab Emirates and Israel on the one hand, and Saudi Arabia and Iran on the other, are now facing a new question: should they not all be prepared for a new danger: the expansionism of Turkey and Qatar?
​  ​This is why the United Arab Emirates and Israel have formed an alliance with Greece and Cyprus, while Saudi Arabia and Iran have entered into secret talks.
https://www.voltairenet.org/article212909.html
​Now it's no secret that Saudi Arabia is talking peace with Iran and Syria:
This latest revelation and confirmation of Saudi-Iran talks also comes as the Saudis are reaching out the the Assad government in Damascus. Earlier this week on Tuesday multiple international reports revealed that Saudi Arabia's powerful intelligence chief traveled to Damascus Monday to meet with his Syrian counterpart in what's being seen as a major step toward detente. The two broke off relations since near the start of the war in 2011, especially as it became clear the Saudis were a key part of the Western allied push for regime change.
https://www.zerohedge.com/geopolitical/these-two-longtime-enemy-mideast-countries-have-entered-unlikely-peace-talks
​Simpler might be better, anyway, huh?​  Are your high beams on or not? Can you tell?
Automakers Are Ditching High Tech Features Amidst Unprecedented Semi Shortage
​  ​The ongoing semi chip crisis is starting to force the auto industry to strip some high tech features out of vehicles.
Automakers like Nissan are leaving navigation systems out of "thousands of vehicles" that would typically have them due to the shortage, according to a new report from Bloomberg. Dodge's Ram no longer offers its 1500 pickups with an "intelligent" rearview mirror.
Similarly, Renault has stopped offering an oversized digital screen behind the steering wheel of its Arkana SUV.
https://www.zerohedge.com/markets/automakers-cutting-out-high-tech-components-vehicles-amidst-unprecedented-semi-shortage
​Tired of Lies​
Posted by John Day at 6:07 PM