​  ​The Biden administration has created this crisis between Russia and Ukraine for a convenient purpose, and the White House is not about to let Zelenskyy screw it up and create peace.
​  ​The U.S. wants President Zelenskyy to leave Ukraine, so the State Department can take full control over the narrative.  Zelenskyy is refusing to leave.​  ​https://theconservativetreehouse.com/blog/2022/02/25/ukraine-and-russia-officials-negotiating-a-meeting-biden-administration-tells-zelenskyy-to-stop-only-u-s-permitted-to-negotiate-with-russia/

The Russian military special operation in Ukraine coincided with the planned launch of U.S. military biolaboratories in Kiev and Odessa. On February 26, the US Embassy in Ukraine rushed to delete all documents about 11 Pentagon-funded bio-laboratories in Ukraine from its website. All these documents (now deleted by the Embassy), you can read HERE.  ​https://southfront.org/russian-military-operation-prevented-launch-of-u-s-bio-laboratories-in-ukraine-kiev-hiding-evidence/

​Pipelines are economic choke-holds. Pipelines are worth killing to control.
THE REAL HISTORY BEHIND UKRAINE, PUTIN, THE EU, GAS, & DONBASS
​U.S. President Barack Obama intended even when he entered office in 2009, to replace Syria’s Government, but his decision to replace Ukraine’s Government didn’t come right away. On 12 April 2010, Ukraine’s democratically elected President, Viktor Yanukovych met the democratically elected U.S. President at the White House, to which Obama had invited him, but Yanukovych refused Obama’s suggestions that Ukraine join America’s alliance against Ukraine’s next-door neighbor Russia. (Obama wanted to take over Russia’s main naval base, which since 1783 has been in Crimea, which the Soviet dictator had transferred to Ukraine in 1954, so it was then in Ukraine — Obama was planning for that Russian naval base in Ukraine to become another U.S. naval base, and for Ukraine to be brought into NATO. But Yanukovych said no.) On 2 July 2010, U.S. Secretary of State Hillary Clinton and Yanukovych held a joint press conference in Kiev, where she said that she had discussed with Yanukovych joint military exercises with U.S. forces against his neighbor, Russia. Yanukovych again declined the demands. Obama then assigned Victoria Nuland, Hillary’s friend (and the wife of the famous neoconservative — or American-imperialist — writer, Robert Kagan) to organize a coup against Ukraine, to place it under U.S. control. Planning for the coup was already under way by no later than 23 June 2011, which was even before the Nord Stream project had yet become signed. But after Nord Stream became agreed later in 2011, that proposed pipeline was immediately added to the Ukrainian-takeover target, as something that needed to be cancelled. (Ukraine’s gas-transit fees were crucial financial support to Ukraine’s government, and Obama wanted those fees to be supporting a post-coup Americanized Ukraine.) As CNBC accurately summarized on 11 July 2018: “President Barack Obama opposed Nord Stream 2 and President George W. Bush came out against the original Nord Stream prior to its completion in 2011. Like the central and eastern European countries, they worried it increased Russian influence over the Continent.” Post-WW-II American Presidents wanted America to control Europe, as key allies to conquer Russia. The Nord Stream project was, to a large extent, a European bid to work cooperatively with Russia and finally free itself of U.S. domination over European countries
https://southfront.org/the-real-history-behind-ukraine-putin-the-eu-gas-donbass/
EU 'Moving Forward' On Russia SWIFT Shut-Out, But Former US Official Says 'Not Nuclear Option'

Eddie Fishman - the former Russia and Europe Lead in the US State Department’s Office of Economic Sanctions Policy and Implementation - responded in a fascinating way:
"No - it’s not even close to being the nuclear option... SWIFT is just a messaging service. If the US and Europe decided to cut Russians banks off from SWIFT without imposing full-blocking sanctions on them, they could still transact with US and European financial institutions - they just couldn’t use SWIFT to do so."

Fishman went on to point out a potentially even bigger blowback consequence for the West's actions: "...and in a perverse way, that may actually increase the demand for SWIFT alternatives, such as Russia’s own System for Transfer of Financial Messages (SPFS)."

https://www.zerohedge.com/geopolitical/eu-moving-forward-russia-swift-shut-out-former-us-official-says-not-nuclear-option
​Geopolitics and Degrowth, Charles Hugh Smith​
​  ​The Geopolitics of Degrowth holds that real power flows not from waste, centralization and coercion but from decentralization, relocalization and the free flow of value.
​  ​Conventional geopolitics is all about more: more military power, more sanctions, more coercion, more influence.
​  ​The Geopolitics of Degrowth is all about the power of less: wasting less, consuming less, needing less from other nations, reducing dependence on rivals, reducing coercion and centralized over-reach.
​  ​Conventional geopolitics concentrates wealth and political power in a giant dam on the biggest river. Centralized control of massed power is considered the acme of geopolitical strength. Everyone is coerced into funding and relying on the dam.
​  ​But this has it backwards: when the centralized dam bursts, the nation is in ruins. This vulnerability isn't power, it's weakness. The Degrowth model of strength is to make local use of every rivulet, stream and tributary, carefully shepherding its sustainability and use.
​  ​Unbeknownst to the mainstream, the world has entered an era of scarcity. The current abundance is a temporary flush of the last of the cheap-to-extract resources. Once this illusory abundance has been consumed, all that's left is hard-to-extract, costly resources.
​  ​In an era of scarcity, power flows not from coercion but from needing less by consuming less by eliminating the tremendous waste and friction that consumes resources, capital and time without generating any positive returns.
https://www.oftwominds.com/blogfeb22/geopolitics-degrowth2-22.html
​Subsistence Farming Investor​
(pictured in homestead upstairs with Jenny after partial rural electrification) 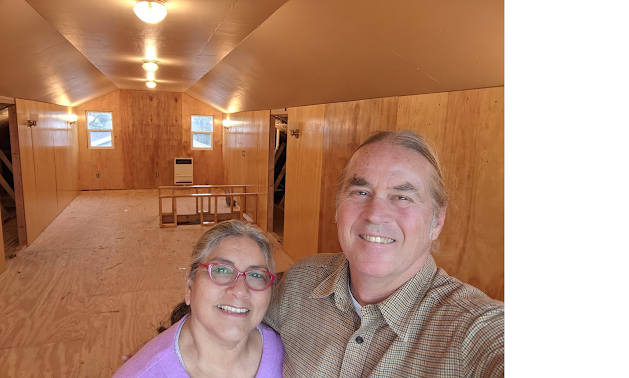