Eleni sends this from Paul Craig Roberts. Happy Independence Day!
Keep this in mind while celebrating “our freedoms” on July 4
In the Wednesday, June 26 edition of the ST LOUIS POST-DISPATCH, columnist TONY MESSENGER describes a raid on a home in connection with the Execution of a Search Warrant by St. Louis County Police, who wanted to inspect the interior of the home, allegedly for non-payment of the gas bill.. The County SWAT team broke down the front door and shot the family pet, a 4-year old Pit Bull, named KIYA. The SWAT team members wore FULL BODY ARMOR and carried M-4 CARBINE RIFLES. A 6-month old boy was present. All members of the house were handcuffed, and made to kneel. The home owners filed a case against the police, which is currently being tried in the Federal Court in St. Louis City..

​Happy Birthday, Julian Assange! This from the UN torture investigator who just got trashed in an open letter for finding that Assange was "tortured" systematically in the Ecuadoran Embassy and British solitary confinement.
​Dear colleagues and friends,
I herewith would like to respond to your open letter, co-signed by numerous distinguished academics and expressing your genuine and legitimate concerns as to the manner in which my recent article “Demasking the Torture of Julian Assange” (bit.ly/2INkrxQ), as well as some of my oral statements, address the “rape” narrative imposed and disseminated by the Swedish prosecution in this case. I am grateful to you for bringing this to my attention, and I greatly value this opportunity to respond...
https://medium.com/@njmelzer/response-to-open-letter-of-1-july-2019-7222083dafc8

​"Ever notice how other people's stuff is 'shit' and your shit is 'stuff'", George Carlin
In short, when it comes to provocation and aggression, the world is our oyster. There are so many bad guys out there and then, of course, there’s us. We can make mistakes and missteps, we can kill staggering numbers of civilians, destroy cities, uproot populations, create hordes of refugees with our never-ending wars across the Greater Middle East and Africa, but aggression? What are you thinking?

I​srael's Haartz newspaper makes this comment. (Koch and Soros want to control US foreign policy, which is on the cusp of change, due to "reality".)
​WASHINGTON — One of the co-founders of a new U.S. think tank that includes the unlikely combination of liberal philanthropist George Soros and libertarian billionaire Charles Koch says the idea was to bring together people who will challenge U.S. foreign policy, regardless of their other political views.
https://www.haaretz.com/us-news/.premium-george-soros-and-charles-koch-agree-on-this-u-s-foreign-policy-needs-to-change-1.7430566

​Eleni has articles from Andrew Korybko about Russian and US interests and "cooperation" in global politics.​
​ ​If the Kremlin concludes that Russia’s interests would best be advanced through engaging in a series of “mutual concessions/compromises” with the US as part of a “New Détente”, then it won’t hesitate to make that move; likewise, if the savvy Russian leader recognizes that he’s being “taken for a ride” by Trump and that his “counterpart” is offering him a lopsided deal that’s doomed to make his country America’s “junior partner” in Eurasia, then he won’t think twice about walking away with no “deal”.Ultimately, everything depends on whatever deal Trump puts on the table and whether he can convince President Putin that his newfound truce with the neoconservatives translates into being able to get the “deep state” to abide by the terms of any prospective agreement.
​ ​If Russia is swayed by the carrot-and-stick combination of the Trump Administration’s possibly sincere commitment to a “New Détente” in exchange for an alleviation of multisided and sometimes humiliating pressure against it, then the geopolitical implications would be profound since Moscow would be ascending into the perfect position for “balancing” Eurasian affairs. It wouldn’t just have China’s tacit support for this initiative but America’s too because each superpower would appreciate Moscow becoming a “balancing” force vis-à-vis the other and freeing them up to focus on their rival in other areas of concern, mostly in Africa. As such, Russia could count on being courted by both of them and finally fulfilling its grand strategic goal to “balance” Eurasia, though provided that this speculative deal goes through in the first place and is actually respected by the US afterwards.
https://orientalreview.org/2018/04/03/what-the-us-really-wants-from-russia/

Beyond any shadow of doubt, the two Great Powers have made “Israel” their joint protectorate, and this surprising state of affairs has far-reaching implications for not just Syria, but the entire Mideast and especially Iran.

​ ​During the joint press conference in Helsinki, President Putin proclaimed his long-known desire to protect “Israeli” interests by telling the world that:
​ ​“I would also like to note that after the terrorists are routed in southwest Syria, in the so-called ‘southern zone’, the situation in the Golan Heights should be brought into full conformity with the 1974 agreement on the disengagement of Israeli and Syrian forces. This will make it possible to bring tranquillity to the Golan Heights and restore the ceasefire between the Syrian Arab Republic and the State of Israel. The President devoted special attention to this issue today.”
​ ​Trump took it even further by adding that:
​ ​“We’ve worked with Israel long and hard for many years, many decades. I think that never has any country been closer than we are. President Putin also is helping Israel, and we both spoke with Bibi Netanyahu. And they would like to do certain things with respect to Syria, having to do with the safety of Israel. So, in that respect we absolutely would like to work in order to help Israel, and Israel will be working with us, so both countries would work jointly.
​And I think that when you look at all the progress that has been made in certain sections with the eradication of ISIS – we’re about 98–99 percent there – and other things that have taken place that we have done and that, frankly, Russia has helped us within certain respects. But I think that working with Israel is a great thing, and creating safety for Israel is something that both President Putin and I would like to see very much.”
https://eurasiafuture.com/2018/07/17/its-official-israel-is-now-a-joint-russian-american-protectorate/?subscribe=error#blog_subscription-2

​"Israel"
​ The present piece aims to briefly explain why it’s politically important for some people to write “Israel” in quotation marks, and how this is actually very pro-Semitic as opposed to “anti-Semitic”. The vast majority of Palestine’s native inhabitants prior to the post-World War II tidal wave of “Weapons of Mass Migration” were Muslim Arabs, and they did not refer to their homeland as “Israel”, which is the name that the European migrants to that territory chose to call their self-declared and partially cleansed political entity. Although the majority of the world’s governments recognize “Israel”, there are still millions of people and a handful of states that don’t, such as the Syrian Arab Republic.
https://www.globalvillagespace.com/writing-israel-in-quotation-marks-is-a-peaceful-form-of-pro-semitic-protest/

Austria bans glyphosate/RoundUp (Can they do that? They're just a country.)
​ ​Austria has voted to ban glyphosate, the main ingredient in Bayer-Monsanto’s notorious Roundup weedkiller, becoming the first EU country to outlaw the chemical, creating a PR disaster for the troubled German company.
​ ​“The scientific evidence of the plant poison’s carcinogenic effect is increasing. It is our responsibility to ban this poison from our environment,” Social Democratic Party leader Pamela Rendi-Wagner said.

One of the cleanup workers who died of illness related to the Twin Towers cleanup had some shoe boxes of CDRs with pictures he took.
Lots. Here are a few.
This kind of photography was not allowed out. I've not seen this before. Thanks Cat.
I wonder what is in there...
All of the images were taken in the direct wake of the September 11 attacks, with the vast majority dating between mid-September and October, 2001.
https://www.dailymail.co.uk/news/article-7185067/Incredible-never-seen-images-Ground-Zero-clean-operation.html 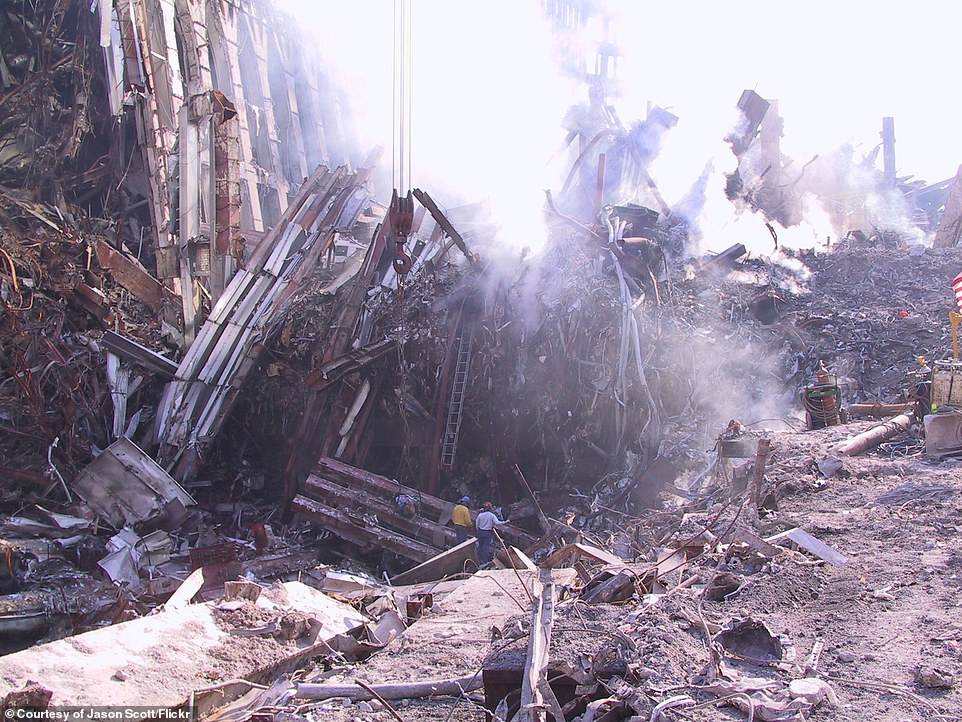 Terminally Ill
Posted by John Day at 11:30 AM