"SMILE, you're on Candid Camera"!
Hi Ehud  :-) We see you at Jeffrey's house.
Israeli Gangster Bibi Netanyahu is really chowing down on rival Ehud Barak for this. (Pot, you're black.)
https://www.zerohedge.com/news/2019-07-17/camouflaged-israeli-ex-pm-pictured-entering-epsteins-mansion-same-day-hotties-show 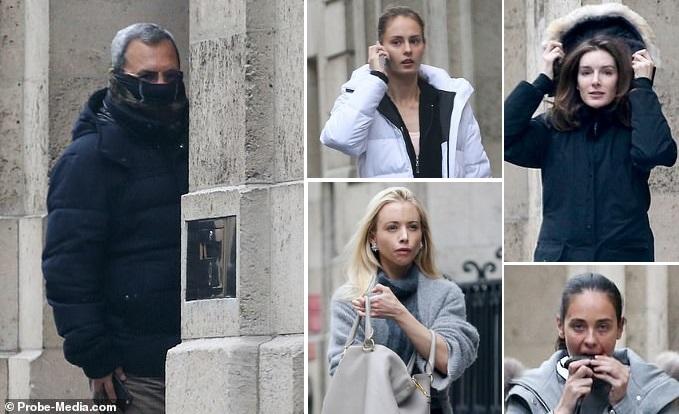 Oh, my. There are a lot of names I recognize already listed here. More to come, and details.
As the Jeffrey Epstein case continues to unfold, a laundry list of celebrities, business magnates and socialites who have flown anywhere near the registered sex offender's orbit are now tainted with pedo-polonium. Many of them, such as Bill Clinton, Ehud Barak, and Victoria's Secret boss Les Wexner have sought to distance themselves from Epstein and his activities - however their attempts have fallen on deaf ears considering their extensive ties to the pedophile.
https://www.zerohedge.com/news/2019-07-17/its-going-be-staggering-epstein-associates-prepare-worst-massive-document-dump

Who knew Rand Paul could be such an effective negotiator.
One day after the Republican senator and son of Ron Paul was reported to be Trump's liaison to negotiate with Iran in hopes of easing tensions, sending the price of oil tumbling, the Guardian report that Iran has offered a deal with the US in which it would "formally and permanently" accept enhanced inspections of its nuclear program, in return for the permanent lifting of US sanctions.
https://www.zerohedge.com/news/2019-07-18/iran-offers-nuclear-deal-if-us-lifts-sanctions-oil-tumbles

Neocons in high places can't let peace happen. They will shrivel and die.
Update: In response to President Trump's announcement earlier in the day that a U.S. Navy ship had “destroyed” an Iranian drone in the Strait of Hormuz on Thursday, Iran's Foreign Minister Mohammad Javad Zarif said he was not aware of any downing, according to Reuters:
“We have no information about losing a drone today,” Zarif told reporters at the United Nations before a meeting with Secretary-General Antonio Guterres.https://www.zerohedge.com/news/2019-07-18/us-navy-shoots-down-iranian-drone-trump

Turkey knows how to open a negotiation. they don't want the expensive and does-nothing-well F-35 "Turkey".
​ ​As expected, Turkey blasted the White House's prior day announcement that it has killed Turkey's involvement in the F-35 joint strike fighter program after Ankara received a first batch of S-400 Russian-made air defense components starting last week. Turkey's foreign ministry called on the US to rectify its "mistake".​ ​“This unilateral step is incompatible with the spirit of alliance and does not rely on any legitimate justification,” the Turkish Foreign Ministry said in a strong-worded statement immediately following the White House press release. “We call on the United States to come back from this mistake that will cause irreparable wounds in our strategic relations,” it said.​  (heh, heh, heh...)​

​Eleni sends this about a lot of things, including analysis of once vaunted American military aircraft.
Turkey Trolls Trump
https://www.lewrockwell.com/2019/07/yvonne-lorenzo/turkey-trolls-trump/

That's escalating quickly!
"Russia is ready to sell its super-maneuverable Sukhoi Su-35 fighter jets to Turkey, the head of the Russian state conglomerate Rostec said Thursday," according to Turkey's English language Daily Sabah.
"If our Turkish colleagues express a desire, we are ready to work out the deliveries of the Su-35," Rostec CEO Sergei Chemezov said.

https://www.zerohedge.com/news/2019-07-18/russia-offers-turkey-its-advanced-su-35-fighters-day-after-f-35-program-expulsion
Three weeks after a meeting between the countries who singed the Iran nuclear deal, also known as the Joint Comprehensive Plan of Action (JCPOA), which was ditched by US, French, British and German officials said the trade mechanism which was proposed last summer - designed to circumvent both SWIFT as well as US sanctions banning trade with Iran - called Instex, is now operational.
​ ​And while we await for the White House to threaten Europe with even greater tariffs unless it ends this special purpose vehicle - it already did once back in May when it warned that anyone associated with the SPV could be barred from the U.S. financial system if it goes into effect - a response from the US is now assured, because in the biggest attack on the dollar as a reserve currency to date, on Thursday, Russia signaled its willingness to join the controversial payments channel, and has called on Brussels to expand the new mechanism to cover oil exports, the FT reported.

​Confederate Dollar
Posted by John Day at 7:17 AM