Note: "Build Back Better World" is now B3W Pepe Escobar has the NWO horse-race story:
​  ​As for the threats from China – South China Sea, Taiwan, the Indo-Pacific overall – it was up to the G7 to come up with a plan.
​  ​Enter “green”, “inclusive” Build Back Better World (B3W), billed as the Western “alternative” to the Belt and Road Initiative (BRI). B3W respects “our values” – which clownish British PM Boris Johnson could not help describing as building infrastructure in a more “gender neutral” or “feminine” way – and, further on down the road, will remove goods produced with forced labor (code for Xinjiang) from supply chains.
​  ​The White House has its own B3W spin: that’s a “values-driven, high-standard, and transparent infrastructure partnership” which will be “mobilizing private-sector capital in four areas of focus – climate, health and health security, digital technology, and gender equality – with catalytic investments from our respective development institutions”
​  ​The initial “catalytic investments” for BW3 were estimated at $100 billion. No one knows how these funds will be coming from the “development institutions”.
​  ​Seasoned Global South observers already bet they will be essentially provided by IMF/World Bank “green” loans tied to private sector investment in selected emerging markets, with an eye on profit.
​  ​The White House is adamant that “B3W will be global in scope, from Latin America and the Caribbean to Africa and the Indo-Pacific”. Note the blatant attempt to match BRI’s reach.
​  ​All these “green” resources and new logistic chains financed by what will be a variant of Central Banks showering helicopter money would ultimately benefit G7 members, certainly not China.
​  ​And the “protector” of these new “green” geostrategic corridors will be – who else? – NATO. That’s the natural consequence of the “global reach” emphasized on the NATO 2030 agenda.
https://www.zerohedge.com/geopolitical/escobar-real-b3w-nato-agenda
​I personally think that none of these agendas will work well going forward, because all of the compensation mechanisms that modern industrial economy currently uses will decompensate at about the same time as oil prices spike above $100/bbl again, which impacts mining, shipping,farming, wages, profits, everything, Then even the Fed won't be able to keep the Ponzi bubble blown.​ Confidence, meet Panic. ("Don't Panic!")
The internet, like everything else in our lives, is not sustainable with a decrease in cheap energy, cheap mined ores and other natural resources.
https://www.ourwebofinconvenienttruths.com/letter-24/
Gail Tverberg, Our Finite World, Where Energy Modeling Goes Wrong
Summary: The economy is approaching near-term collapse, not peak oil. The result is quite different.
​  ​The modeling that comes closest to being correct is that which underlies the 1972 book, The Limits to Growth by Donella Meadows and others. This modeling was based on physical quantities of resources, with no financial system whatsoever. The base model, shown here, indicates that limits would be reached a few years later than we actually seem to be reaching them. The dotted black line in Figure 1 indicates where I saw the world economy to be in January 2019, based on the limits we already seemed to be reaching at that time.​
(I think that line is ​drawn ​at 2010, myself.)
https://ourfiniteworld.com/2021/02/03/where-energy-modeling-goes-wrong/ 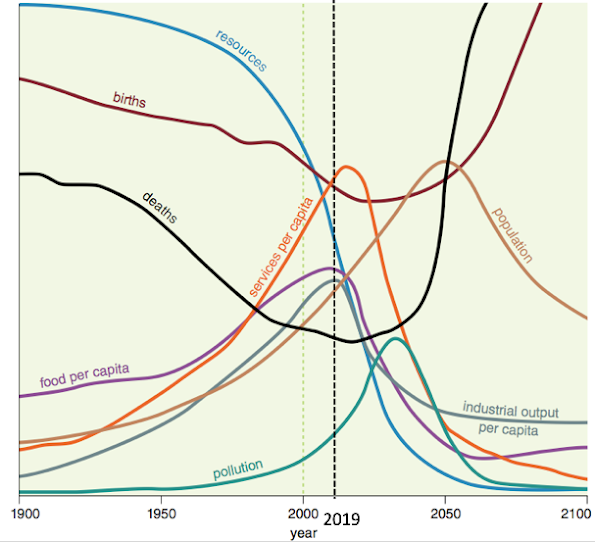 ​There are different global groups of elites, at war against each other, and the western elites are at war internally, too.​ I am on the side of complex living ecosystems.
Have the Great Reset Technocrats Really Thought This Through? Evil: Between Depopulation & Neuralink
​  ​The only thing left to destroy in a world populated by elites alone, are other elites. It would seem that the desire to dominate others does not simply come to an end on its own.
​  ​With the UN World Food Program announcing that some 270 million people worldwide now face starvation, the ongoing debate about the real aims of the technocracy is profound. The question is whether their aim tends more towards major population reduction, or more towards a new type of slavery.
​  ​It appears that philosophical and long-term practical questions remain​s​ a mystery. We will argue that evil, not simply the influence of the base upon the superstructure, is at the core of this endeavor. We have defined evil as inflicting the highest degree of pain upon the greatest number of resisting subjects. In short, we have defined evil as sadism, inflicting evil because it brings satisfaction to those inflicting it.
​  ​Because evil is fundamentally a destructive force, it cannot create anything: nothing in it is truly novel nor of use to humanity. Its pleasures are short-lived and spurious. It is unsustainable, self-defeating, ultimately leading to self-destruction.
[Lots of excellent facts and analysis.] ...
​  ​For these reasons, it is likely that some elites have seen the problem in this end game. This would explain the inter-elite conflict which we have explored previously, and will return to in the near future.
https://www.strategic-culture.org/news/2021/06/19/have-the-great-reset-technocrats-really-thought-this-through-evil-between-depopulation-neuralink/
​CJ Hopkins,  Manufacturing (New Normal) Reality
​  ​During the changeover from the old “reality” to the new “reality,” the society is torn apart. The old “reality” is being disassembled and the new one has not yet taken its place. It feels like madness, and, in a way, it is. For a time, the society is split in two, as the two “realities” battle it out for dominance. “Reality” being what it is (i.e., monolithic), this is a fight to the death. In the end, only one “reality” can prevail.
​  ​This is the crucial period for the totalitarian movement. It needs to negate the old “reality” in order to implement the new one, and it cannot do that with reason and facts, so it has to do it with fear and brute force. It needs to terrorize the majority of society into a state of mindless mass hysteria that can be turned against those resisting the new “reality.” It is not a matter of persuading or convincing people to accept the new “reality.” It’s more like how you drive a herd of cattle. You scare them enough to get them moving, then you steer them wherever you want them to go. The cattle do not know or understand where they are going. They are simply reacting to a physical stimulus. Facts and reason have nothing to do with it.​..​
The pressure to conform to the new “reality” is already intense and it’s going to get worse as vaccination passes, public mask-wearing, periodic lockdowns, etc., become normalized. Those who don’t conform will be systematically demonized, socially and/or professionally ostracized, segregated, and otherwise punished. Our opinions will be censored. We will be “canceled,” deplatformed, demonitized, and otherwise silenced. Our views will be labeled “potentially harmful.” We will be accused of spreading “misinformation,” of being “far-right extremists,” “racists,” “anti-Semites,” “conspiracy theorists,” “anti-vaxxers,” “anti-global-capitalist violent domestic terrorists,” or just garden variety “sexual harassers,” or whatever they believe will damage us the most.
T​his will happen in both the public and personal spheres. Not just governments, the media, and corporations, but your colleagues, friends, and family will do this. Strangers in shops and restaurants will do this. Most of them will not do it consciously. They will do it because your non-conformity represents an existential threat to them … a negation of their new “reality” and a reminder of the reality they surrendered in order to remain a “normal” person and avoid the punishments described above.
​  ​This is nothing new, of course. It is how “reality” is manufactured, not only in totalitarian systems, but in every organized social system. Those in power instrumentalize the masses to enforce conformity with their official ideology. Totalitarianism is just its most extreme and most dangerously paranoid and fanatical form.
https://consentfactory.org/2021/06/20/manufacturing-new-normal-reality/
​COVID-Tracker Device Installs Itself​ Without User Consent, Including On Parental-Locked Devices
​...​Yeah, not creepy at all, right?
​I​t’s just an ap that tracks you and who you’ve been near, cross indexes you to external databases, and reports on contacts.
​T​hat claims to be anonymous, yet somehow knows everyone’s disease status.
​D​eveloped with google and apple but claiming not to share data with them.
​T​hat ghost installs itself automatically on your phone.​ ​without your request or permission.
and that has no icon and cannot be opened or used or disabled.
and that circumvents locked phones and parental controls.
and re-installs itself even if you try to remove it.
so, you know, like, what’s to worry about, ya know?
https://boriquagato.substack.com/p/mass-electronic-surveillance
​When the enforcers leave, the regime topples. Usually, they have somewhere else to go.
Group identity and loyalty matter a lot to humans in hard times.
Entire Portland Police Rapid Response Team Resigns After Officer Indicted for Breaking Up Antifa Riot
https://humanevents.com/2021/06/17/entire-portland-police-rapid-response-team-resigns-after-officer-indicted-for-breaking-up-antifa-riot/
We Are About To RunOut Of Some Stuff

​  ​You’ve probably never heard of Yantian International Container Terminal, the busiest port of Shenzhen. Overall, Shenzhen is the third largest container port in the world, roughly three times as big as the largest US port, Los Angeles. Not that far away sits another place you’ve never heard of, Guangzhou Harbor, the world’s fifth largest container port. Together, these two ports handled nearly 50 million twenty-foot equivalent units (TEUs) of cargo in 2018.
​  ​In about a week, these ports will be all you hear about.
​  ​The Chinese province of Guangzhou is dealing with an outbreak of the Delta variant of COVID-19, a highly contagious form of the virus originally discovered in India. The Chinese Communist Party (CCP) has a history of aggressively dealing with localized COVID-19 outbreaks, and this time is no different, global supply chains be damned. And damned they will be. In late May, the CCP effectively shut down these two ports, leading to an unprecedented shipping logjam that will make the March 2021 blockage of the Suez Canal by the Ever Given seem downright trivial.​  ​https://doomberg.substack.com/p/we-are-about-to-run-out-of-some-stuff

​The Indian State of Goa, after having very good success with ivermectin, zinc, doxycycline and vitamin-D, suddenly recalls all of those home treatment kits that were working so very well, and makes a few foot-shuffling excuses. https://timesofindia.indiatimes.com/city/goa/ivermectin-doxy-zinc-to-be-excluded-from-covid-home-isolation-kits/articleshow/83676133.cms 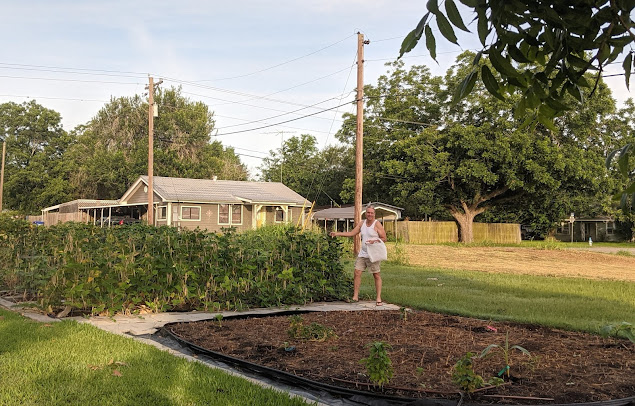