Cowpea curculio is a weevil that can be very destructive to the crops it attacks.
This pest is just as destructive to southern peas as the boll weevil is to cotton.
The cowpea weevil is originally from Mexico and Central America.
This weevil arrived in North America in the 1800s.
​  ​David Riley, professor of entomology at the University of Georgia, has been conducting research on cowpea curculio for the past eight years. He says weevils wreak havoc on southern pea crops when the peas start to flower. “The cowpea weevils will come into the fields and search for young developing pea pods to lay their eggs in,” says Riley. “They will eat a little hole and lay an egg inside the pea pod. The egg will then hatch inside the pod, and the little grub will start to feed on the pea. It eventually eats the pea. When it matures, the grub will come out of the pea pod, drop to the ground, and then it will pupate in the soil.”
https://vscnews.com/cowpea-curculio-wreaking-havoc-in-the-southeast/
​  A few years ago I started growing "field peas", Whippoorwill type, once the most grown type in the US, grown by Thomas Jefferson, "once the standard". They grow in all soils, and keep producing all season. Those are good characteristics. The peas (beans, actually, but African beans, not new world beans) are smallish, dense and benefit from being soaked and cooked longer than "Queen Ann" blackeyed peas that you buy in the store. They have done fine for me. I never had weevil problems, so I never learned more about weevils, but I decided to try other kinds of blackeyed peas last year, so I started learning about weevils.
​https://www.southernexposure.com/products/whippoorwill-southern-pea-cowpea/
Last year, and this year, I have also grown Mackey Peas, a Texas heirloom, a bigger, softer pea, with more pea mass and a nicer flavor and texture. Halfway through last season, growing them in Yoakum, I noticed more and more weevil damage to pods and peas. This year I grew them in Austin and grew the whippoorwill peas in Yoakum. It's the peas, not the place. The weevils find them. It got so bad that most pods had a minority of the peas good, or none at all, empty pods. I just took the row out, and Jenny is taking it to friendly chickens that don't complain. The Whippoorwill peas in Yoakum are doing fine. I won't plant Mackey Peas again.
Here is the lowdown on growing Field Peas, from Hoss Tools, information that I found over the weekend.
https://hosstools.com/growing-best-field-peas-garden/
I have ordered some Misssissippi Purplehull peas, the most disease resistant variety they sell, developed by the Mississippi Ag. Experiment station in 1973. They call it a "crowder" type of field pea. It is not sold as weevil-resistant, but nothing is.  https://hosstools.com/product/mississippi-purplehull-pea/
I also ordered some Red Ripper a vining type of "Crowder" pea, widely sold, widely planted in Texas, an old variety. It's good for eating, or as a cover crop, and drought tolerant. They don't say anything about weevils. I'm going to do the test.  https://hosstools.com/product/red-ripper-pea/
The Mackey peas are out to the chicken yard. I'll plant these 2 types when they come in. I'll see how many I get after the weevils are through, and if I like them better than whippoorwill peas
Interesting points I learned are that the weevils don't attack new world beans, like black beans and pinto beans, or at least don't do much harm. New world beans and weevils co-evolved, so the beans developed a defense (or they would have been eradicated). A strategy is to plant beans before cowpeas (typically planted earlier in spring) to attract the weevils to a futile effort. The new world beans developed a chemical that blocks the digestion of starch by the weevils. The African beans (cowpeas) don't have that protection. Another strategy is to plant the cowpeas/field-peas/southern-peas in August and grow them into the fall. The weevils save up fat for winter in the fall, and lay fewer eggs, so they do less damage than in spring and summer.
It's a lot of work shelling southern peas, at least for what you get, but it's more work shelling black beans. I looked up high (Combine harvesters, outta' my league) and low tech ways of threshing them. The best I came up with uses burlap bags, beaten with sticks as they hang, and the beans let out a hole in the bottom. All the methods involve beating them with sticks and separating the beans from the pile of husks. This looks easiest:
https://www.almanac.com/extra/threshing-dry-beans-john-withees-bean-bag-method
I might try growing pinto beans next year.
I really am focused on how much work for how much food, now. This is probably the main factor in how traditionally grown varieties were chosen and developed. It includes factors like insect loss and time to process and shelf life all together.
Outsmarting Weevils
Jenny pictured July 5 with a purple onion, ready to be dried​ 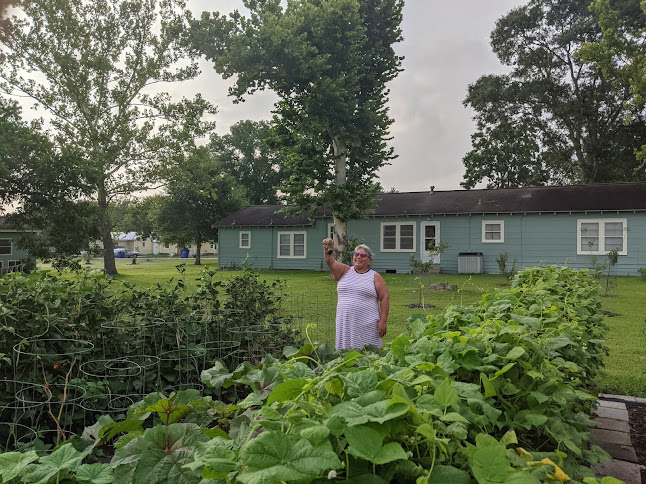