The Will Of Love

This song was playing in my head in the garden as I picked "southern peas" a couple of days ago.
https://www.youtube.com/watch?v=2BMY7gG47fI
Yesterday I shared the tension I am feeling.
https://www.johndayblog.com/2021/07/no-longer-abstract.html
People tell me they are feeling it, too.
I thought it helped explain those crazy moments in history, like those that led people into WW-2.
The constant tension feels unbearable. Others are urging, cajoling, bullying and publicly-shaming us to do-the-thing, like everybody else.
Don't keep being weird. What's wrong with you?
A couple of friends of mine at work, both Registered Nurses, informed, responsible, good parents, are looking for a pediatric practice where they can take their kids, where they will not be looked at like lepers or gargoyles when they say they (the parents) "have not been vaccinated".
I called a practice where I used to work. They're still human to people who don't want vaccines. The culture also applies to adults who have good reasons not to want this bunch. I passed it on. It's safe to call Central Family Practice in Austin.
Jenny, my humanity-compass, my wife, has been feeling tremendously pressured and torn. It's not that she doesn't see the power dynamics and the stakes.
Jenny is a school librarian. She told me when people at school, coworkers got COVID last summer, fall and winter, and I privately talked with those people, and wrote them prescriptions for ivermectin based antiviral treatment. I also treated a husband with cancer, on chemo,
They all got better, and nobody paid me anything. Good Samaritan. I think it was 6 people.
That was wonderful. Everybody liked that. As spring progressed, it got harder and harder for Jenny to tell everybody "she was not vaccinated". Some of it came from coworkers , but also a lot from concerned parents, bringing their kids back to school in person, after a long time at home.
Jenny is dreading going back to school and having to give the same "wrong answer" to concerned-parents again and again, day after day until she breaks and acquiesces and can be accepted as not-leprous.
"Accepting the jab is nothing more than a loyalty test to the narrative."
Somebody commented that on The Automatic Earth blog yesterday, and I like it a lot as an encapsulation of the social tension dynamic here.
The feeling totally sucks. It's unrelenting cognitive dissonance, making one feel anxious and shunned, and very insecure.
It's a feeling. Feelings are different from thoughts. Feelings don't usually respond well to being thought-at.
Narratives change by being resisted sufficiently for the question to remain open, as the evidence piles up that the narrative is wrong and dangerous.
Then the paradigm has to shift. Tet-offensive, Vietnam. It happened. You might like other examples, but I lived that paradigm shift. Dad got back from a year in Vietnam just before Tet started, and I saw the whole societal shift unfold from Camp Lejeune, North Carolina, where we moved.
Back to the feeling that sucks so bad, it makes you want to jump, cowering and shivering and shaking...
I feel it. What have I tried to do?
I don't mean to be vain, but all I can give is what I found when I prayed for my own guidance.
I have to meet the feeling of personal insecurity with compassion for those experiencing it, then it is not "I" experiencing it, but "I" am giving warmth and connection and support to those feeling it. In the societal-dominance dynamic, people are used against each other to create great tension by division and social pressure. Then, those group divisions are turned against each other, to kill each other until they are all exhausted and deeply traumatized, and willing to fully submit to power.
The Will of Love is the opposite of that.
I am trying to channel the Will of Love, which is to comfort my brothers and sisters who are shivering and cowering alone.
The power over us will no longer exist, when we comfort and love and accept each other.
Time will dissolve it.
Trying To Love
pictured recently with vegetables 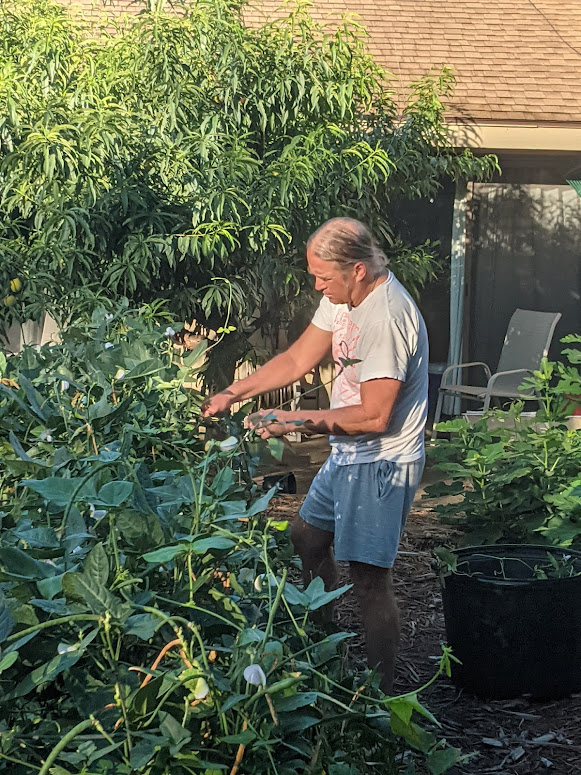