I have had a hard time recently with my own thoughts and perspective, which comes as a shock to me sometimes, but not other times, depending upon my thoughts and perspective at the moment. I'd like to say that I'm usually a lot more stable than this, and I might be, but it's hard to tell when you are evaluating yourself in choppy-waters. Jenny helps. Thanks Jenny!
You might or might not be experiencing ups and downs of your personal perspective as broad abstractions get pierced by little flying-realities on a daily basis. Whatever worldview any of us may have, it is breaking down in the parts where we use it to predict the near and slightly more distant future, and to judge what our best plans and actions should be today, tomorrow and next month.
We can see things shifting, becoming less reliable, becoming more threatening and demanding, more divisive at every turn. We can see that this has happened before in history, but we never understood it from our vantage points. I don't know that "understanding it" is a good description now, either, but I'm starting to get it.
It's a feeling of desperation. We might all feel like it's mostly a personal thing, but I really don't think it is. I think I personally feel anxiety and desperation and frustration, anger, judgementality, and I don't think I'm alone. I honestly think these feelings suffuse a large human group when resources start to get tight.
The clinginess is like a drowning swimmer drowning the would-be rescuer.
I took life-saving in college . I eventually saved a life in Galveston Bay. We could both have died.
We wondered for a couple of hours. It was not yet that day..
It was actually somewhat calmer than living in Austin, Texas in 2021.  And we have it a lot better in Texas than most places in this desperate world.
I keep growing vegetables. I keep treating patients. I am about to bike to the clinic again.
I am sharing my feelings with you.
Ilargi at the Automatic Earth:   A Pandemic of the Vaccinated?
​  ​In short, after some 7 months of the vaccines being used, we know they are useless for preventing infection, even if loud voices keep insisting the world will come to an end if not everyone gets vaccinated. They may lead to a huge number of false positives though, meaning that once your cells start producing spike proteins, you may well get sick anyway. Sort of like a self-fulfilling prescription. Solution from industry and experts: boosters, induce cells to produce more toxic proteins. Hmmm.
​  ​I’m not sure you would call the ensuing disease Covid-19, even if it has the same spike proteins, but it will have many of the same symptoms: pulmonary issues, myocarditis, other heart problems, blindness etc.
​  ​And death. By now you must have seen some numbers, even if the media and politics keep them from you. The latest count in the US is about 11,000 deaths from the vaccines, and there is a court case being filed that claims the real count is 45,000. It could well be much more, but it’s hard to prove. All we need to know really is that in the past, 25-50 deaths was all it took to shelve a vaccine.
​  ​Adverse reactions other than death are if possible even harder to get a grip on. The VAERS system says there are presently some 450,000 reported, but the UK’s MHRA yellow Card system was already well above 1,000,000 there two weeks ago, so you can pick any number you like. These systems typically register between 1-10% of events.
​  ​Question is, do you want to pick that number AFTER getting jabbed? I’ve said before, you must count on your immune system being strong enough to fight the vaccine, not just the virus.
https://www.theautomaticearth.com/2021/07/a-pandemic-of-the-vaccinated/#post-80418
​John Ward is a Brit with a suspended driver's license in post-Brexit-fascist-lockdown France, without a vaccine-passport.
​  What exactly is it we all feel at the moment? Most people who return regularly to this site probably have a dominant feeling of frustration (how can seven out of eight Western citizens be so unutterably gullible?) with a secondary sense of unease mumbling away in the background (where is all this going to end?).
The 86%, I suspect, suffer from knee-jerk fear, and a misplaced belief in the State and its media. Judging by the vast majority of insouciant pond-weed on Facebook, having taken the “straightforward” step of being vaccinated, such blissfully uninformed plantlife indulge themselves in smug dismissal of all contrarian thinking; and in the sector of this malleable majority a little further down the evolutionary tree, there is – ever more noticeable by the week – a growing mob rabidity directed at those they call “selfish” and “anti-social”.
We the ‘deadly unvaxed’ are unsurprisingly being weaponised...
https://therealslog.com/2021/07/21/post-virus-analysis-whos-calling-the-shots/
That Finnish company that makes the nasal spray "Linux" open-source COVID vaccine had it ready to go to human trials 14 months ago. The just got  nine-million-euros to move forward. (The pandemic has given way to the endemic, now.)
https://yle.fi/uutiset/osasto/news/finnish_company_receives_funding_to_develop_nasal_spray_covid_vaccine/12011618
Fish oil helps people survive and get less sick with COVID in this Iranian study. (Their medicine supply got cut off by sanctions.)
https://www.ncbi.nlm.nih.gov/pmc/articles/PMC8006115/
From The Economic Standard (from May), a review of evidence on Ivermectin treatment. Eric Sass is involved with COVID-treating physicians, and is updating his site. It bears getting familiar with,
https://theeconomicstandard.com/ivermectin-review/
Sharing Our Times
pictured recently in the replanted avocado orchard after 7 hours of hard mowing in high humidity 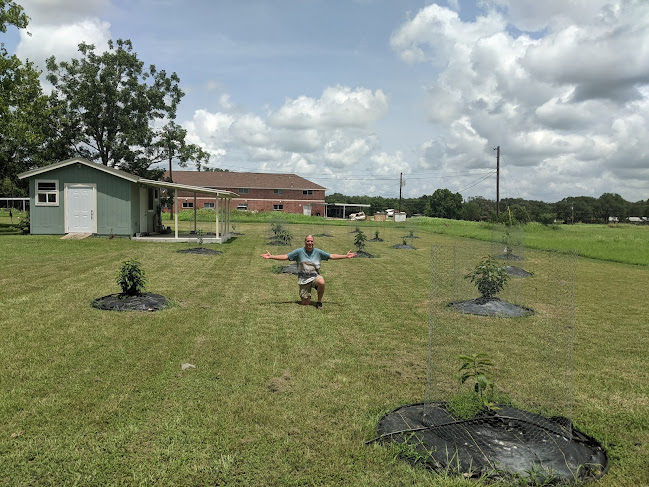