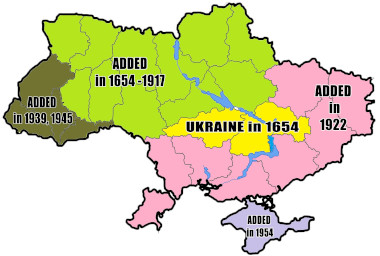 David Stockman gives his (colorful and punchy) historical rundown and makes a similar guess as to what the new borders will be, for the same reasons.
https://original.antiwar.com/David_Stockman/2022/03/18/pearl-harbor-my-eye/ 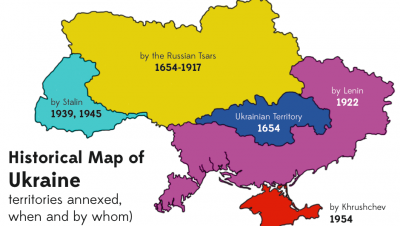 Is the Petrodollar Swaying? ​ ​By Ghassan Kadi for the Saker Blog
​  ​The Petrodollar was meant to be a win-win agreement in which America propped up its economy, and in return supplied Saudi Arabia with security.
As time went by, the deal became increasingly one-sided, one in which Saudi Arabia was getting the spiky end of the pineapple. The Saudis have been feeling shafted for a long time, but they did not have enough intestinal fortitude to stand up and show their dismay to Uncle Sam.​..
America does not expect MBS to only condemn Russia and mirror the sanctions, but it also expects him to pump more oil into the global market in order to meet the shortfall created by the sanctions.
MBS is not playing ball the way America wants him to play. He is refusing to condemn Russia, thus far refusing to lift oil production. But most seriously, he is discussing with China doing oil transactions in the Yuan (Renminbi) instead of the USD...
MBS seems to be maturing enough to know how to play the game of the big boys. What is really pertinent is that the so-called Petrodollar, and what is left of its future, rest in his hands; and America has no say in this. Even as I finalize this article, news of a USD collapse is already being reported on the mainstream media.   With the deployment of the Kinzhal missile yesterday, the first-ever use of hypersonic weapons in combat, we can surely be certain that the changes we are witnessing now, economic or military, are not ones that the West ever desired or envisaged.
https://thesaker.is/is-the-petrodollar-swaying/
Natural gas contains more hydrogen and less carbon, so makes less CO2 when burned. It is presented as a "transition fuel", but the cost of extracting it is rising rapidly. The current energy return on energy invested is workable, but becomes unworkable for the current industrial system if the investment-cost of gas effectively doubles. It is expected to triple or quadruple by 2050. Thanks Charles.
Assessing Global Long-Term EROI of Gas: A Net-Energy Perspective on the Energy Transition​
​..​We find that the energy necessary to produce gas (including direct and indirect energy and material costs) corresponds to 6.7% of the gross energy produced at present, and is growing at an exponential rate: by 2050, it will reach 23.7%.
https://www.mdpi.com/1996-1073/14/16/5112
​Food insecurity makes human populations warlike.​
NOAA Warns US Megadrought Will Persist; May Impact Food Supply Chains
https://www.zerohedge.com/weather/noaa-warns-us-megadrought-will-persist-may-impact-food-supply-chains
​Why did "we" win over "them" after 100,000 years of competition? Immune systems? More fertile? Adapted better to something or other? Thanks Charles.
War in the time of Neanderthals: How our species battled for supremacy for over 100,000 years
To war is human – and Neanderthals were very like us.
​,,​Predatory land mammals are territorial, especially pack-hunters. Like lions, wolves and Homo sapiens, Neanderthals were cooperative big-game hunters. These predators, sitting atop the food chain, have few predators of their own, so overpopulation drives conflict over hunting grounds. Neanderthals faced the same problem; if other species didn’t control their numbers, conflict would have...
..War isn’t a modern invention, but an ancient, fundamental part of our humanity. Historically, all peoples warred. Our oldest writings are filled with war stories. Archaeology reveals ancient fortresses and battles, and sites of prehistoric massacres going back millennia.
​  ​To war is human – and Neanderthals were very like us. We’re remarkably similar in our skull and skeletal anatomy, and share 99.7% of our DNA. Behaviourally, Neanderthals were astonishingly like us. They made fire, buried their dead, fashioned jewellery from seashells and animal teeth, made artwork and stone shrines. If Neanderthals shared so many of our creative instincts, they probably shared many of our destructive instincts, too..​.
​..The best evidence that Neanderthals not only fought but excelled at war, is that they met us and weren’t immediately overrun. Instead, for around 100,000 years, Neanderthals resisted modern human expansion...
..Why else would we take so long to leave Africa? Not because the environment was hostile but because Neanderthals were already thriving in Europe and Asia.​..​
​https://bigthink.com/the-present/neanderthal-war/
​  I think that to avoid our warlike group impulses we need to keep ourselves securely fed. However, we outgrow our food supplies. When this happens, our sociopathic rulers direct us to kill our neighbors and take their food supplies and territory.
I see this coming our way. My proactive adaptation is to grow a garden and store a bit of food in a rural area where the weather mostly won't actually kill you if you run out of fuel and electricity. This just mitigates our chances of being targeted, I think. It's what we can manage. To be more safe, we need to improve food security of the community. How does one family do that? I have various long term community-garden ideas. I see people in Yoakum growing vegetables already. It's traditional, Most people don't grow vegetables.​ Our garden is well displayed to the street.
It's not a very busy street. We're probably not very influential.
Public Gardener
(pictured pushing the mower by the spring equinox garden yesterday) 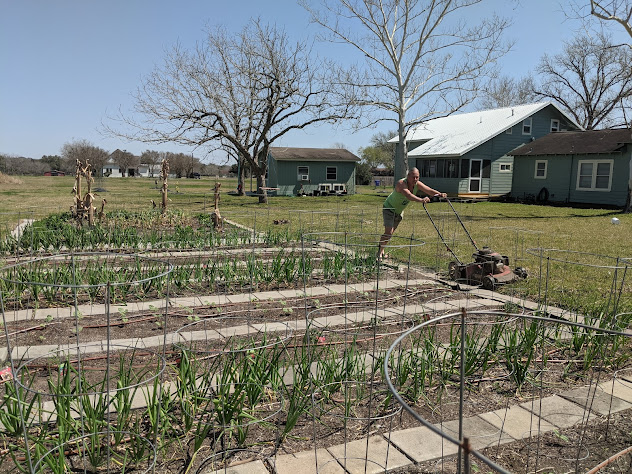