Last night I noticed an email from Google that the blog post "Worst Enemy" from 3/19/22 had been "deleted" due to violation of some condition in the list on their website, to which they thoughtfully sent a link for my edification.
The post had garnered over 100 views on Blogger, and 380 on Substack, where it remains uncensored  https://drjohnsblog.substack.com/p/worst-enemy?s=w
I started up the Substack blog after the 2/22/22 post "Two New Countries" prompted Google to delete my blog and gmail account.
It was  the same vague "figure  out your sin" message.
We jumped through Google's hoops and it was all reinstated, including the "Two New Countries" post, which had looked at Russian recognition of Donetsk and Luhansk People's Republics, declared 8 years previously by the republics, under duress of Ukrainian nationalist genocide, following the US-instigated 2014 coup.
Substack allowed me to send to subscribers, so I did not have to do that via gmail, which was the likely reason our gmail account was "disappeared" at the same time as Johnday's Blog.
I had started Johnday's Blog in spring 2016, when my bcc email news-sends to about 200 friends started getting blocked, no matter what I did to comply. The main anti-narrative work I was doing was documenting the Democratic Primary fraud, which was disenfranchising Sanders voters (like myself). That censorship stopped 3 days after Trump was elected (without my help. I voted for Jill Stein). It happened again leading up to the 2018 and 2020 elections, b ut people could look at the blog if the email did not go through.
There has been censorship associated with my medical investigations of the COVID pandemic, suppression of early and hospital medical treatments, including ivermectin and hydroxychloroquine. The American Board of Family Medicine is reviewing my Board Certification status (31 years) for "discouraging patients from vaccination against COVID-19", also known as "informed consent". They cited the (factual, linked) information on my blog as damning evidence. They are dragging this process out.
What is consistent is that information disputing or disproving the current Control-Narrative being promulgated by power-elites is what will be censored.
The "Worst Enemy" post addressed this specifically, and included multiple narrative-deflating links and excerpts, opening with an essay that explained how "The West Is At War With Itself", or self-defeating, or "its own worst enemy". This begs the question of "why that post?". There was analysis of the Ukraine war from various sometimes-censored Russian and Russia-friendly sites.
Mish Shedlock may crack that nut open with this article about how the Biden administration is driving oil prices up, while pretending to try to lower them.
https://www.zerohedge.com/political/biden-doing-everything-possible-drive-price-oil-some-its-illegal
It is not merely the sanctions against Russian oil and gas. There is more.
I have been aware of predictions that the world would face an oil supply crisis in 2023 since late 2021. It seems to me that the price shock early this year will reduce the demand for oil at these high prices  by depressing economies. That "heads it off at the pass", softening the hard supply-inadequacy shock.
The control-narrative of war-with-Russia is tried and true, worked well for the "owners" for most of my life, and has now been fully-rehabilitated for the peak-oil crisis.
Last June Gail Tverberg had this analysis:  Where Energy Modeling Goes Wrong
Summary: The economy is approaching near-term collapse, not peak oil. The result is quite different.
The modeling that comes closest to being correct is that which underlies the 1972 book, The Limits to Growth by Donella Meadows and others. This modeling was based on physical quantities of resources, with no financial system whatsoever. The base model, shown here, indicates that limits would be reached a few years later than we actually seem to be reaching them. The dotted black line in Figure 1 indicates where I saw the world economy to be in January 2019, based on the limits we already seemed to be reaching at that time.
(I think that line is drawn at 2010, myself.)
https://ourfiniteworld.com/2021/02/03/where-energy-modeling-goes-wrong/

​  There is a control-narrative scramble to herd people into a response to the end-of-cheap-energy, as pollution, global warming, and global shortages of critical minerals for batteries, chips and electric motors break the finely tuned global economy and supply chains.
"We" tried Global-Warming/climate-change, but it was hard to get people motivated to change, and businesses still had to maximize profits and compete, so buying an electric car, solar panels and wind turbines happened, but there was no reduction in mining or burning.​
Climate change is happening, but it's less of  threat than running short of oil, which is slated to happen first.
"COVID-Pandemic" control-narrative DID decrease global oil usage, even American oil consumption decreased, but that control-narrative is worn out. It spent its last burst on mandating the deadly mRNA gene-therapy "vaccines", which make people up to 3 times as likely to catch the latest COVID variant when it comes to town.
https://dailysceptic.org/2022/03/20/vaccine-effectiveness-hits-as-low-as-minus-300-as-ukhsa-announces-it-will-no-longer-publish-the-data/

The WAR-With-Russia control-narrative can be "turned up to eleven", and evokes the rational fear of nuclear Armageddon. Russia and Europe seem to be cooperating. What could go wrong?
War could go wrong, of course, but there are a lot of economic and financial details to work out.  There is going to be a "new" world financial order, and all of the players want to control it so that it sends them rent payments without fail. I commonly see the threat of the Chinese Yuan/renminbi displacing the dollar as global reserve currency shot down, but it is a straw-man threat.
What the Chinese, Russians, other Asian countries, Iran and others are looking at is a specific global trade currency, such as John Maynard Keynes described in the 1930s-1940s, but which was not adopted at Bretton Woods. It would be backed by commodities, like gold, oil, wheat, rice and soybeans, and actual industrial output from factories. Saudi Arabia is making it clear that it is happy to consider divorce from the $US, as that "protection" deal looks like it might better be serviced by Russia and China soon.
What the global banking friends would like to see is global digital currency, and they are willing to give us free-money in a digital account so that we will become reliant upon it. California seeks to be an innovator, but the EU is all over it, too.
https://www.zerohedge.com/political/newsom-wants-give-400-debit-cards-california-car-owners-because-putin-invaded-ukraine
https://www.zerohedge.com/markets/rabo-gasoline-stimulus-checks-how-you-return-70s-style-wage-price-spiral
Yes, the currency will hyperinflate this way, but novel "fixes" like eliminating your money will become available to central bankers.
In general  drjohnsblog.substack.com will be a better place to look for my research as we go forward into harsher economic times, and probably harsher censorship of truthful foils to the dominant control-narrative. "WAR!" will be the control narrative for the foreseeable future, and the real problem will be global resource depletion.
Keep those points in mind, and steer towards food security and lower cost living, especially where you cn grow vegetables and the local people and weather won't (usually) try to kill you.
Thought Criminal
(pictured with new shoots sprouting from banana plant) 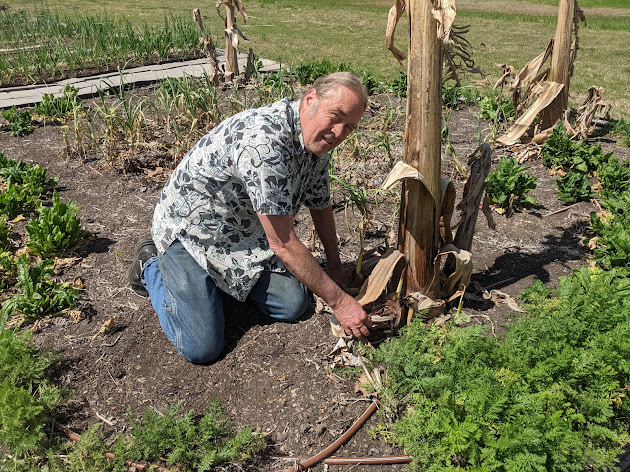