Jessica Rose Ph.D. has an article on epigenetics, on how genes are selectively expressed and suppressed in our bodies. Here is the high point.
​  ​Cancer is basically the epigenetic modification of the p53 tumor suppressor gene: the guardian of the genome. I love that: the guardian of the genome. I should actually be called p43.7, I think. I guess p53 is catchier.
​  ​The p53 protein not only enforces the stability of the genome by the prevention of genetic alterations in cells but also plays a role in regulating the epigenetic changes that can occur in cells.¹³
​  ​p53 suppresses tumor formation by regulating DNA repair. The impairment of this regulation can lead to cancer through loss of regulation of cell cycle. Its reintroduction into cancer cells, induces cell cycle arrest in the cancer cell. Expression levels, like everything in biology, is very important. Over expression of p53 can result in too much apoptosis (programmed cell death), and under expression can result in cancer.¹⁴ Epigenetic factors can affect p53 expression levels.¹⁵ ¹⁶ ¹⁷ ¹⁸ ¹⁹ They can also affect other DNA damage repair elements and their regulation.
​  ​A brilliantly frightening and frighteningly brilliant paper was published in October, 2021 in the journal Viruses entitled “SARS-CoV-2 Spike Impairs DNA Damage Repair and Inhibits V(D)J Recombination In Vitro”²⁰. When you read it, and you should read it, you will learn something very disturbing: the authors found that the spike protein was abundant in the nuclei of study cells. The nucleus is where most DNA repair occurs. They found that spike protein significantly suppressed both homologous recombination (HR) and non-homologous end joining (NHEJ) repair mechanisms. These are essential components to DNA repair and proper functioning in adaptive immunity (T and B cells). But even more scary, they found that the spike protein directly affects DNA repair in the nucleus by interfering with double-stranded DNA break (DSB) repair.
https://jessicar.substack.com/p/do-the-covid-19-injections-contain/comments
PfizerGate: Official Government Reports prove Hundreds of Thousands of People Are Dying Every Single Week Due to COVID-19 Vaccination​  ​
​..​Covid-19 injections are killing hundreds of thousands of people every single week. For instance, the UK Government has confirmed fully vaccinated young adults are 92% more likely to die than unvaccinated young adults (see here).
​  ​They’ve also confirmed COVID vaccinated children are at least 4423% more likely to die of any cause & 13,633% more likely to die of COVID-19 than unvaccinated children (see here).
​  ​But the most damning evidence of all lies in 4 simple facts.
​  ​Fact No.1: Medicine Regulators have been forced to admit the Covid-19 vaccine can damage the heart.
​  ​Fact No.2: Record-breaking numbers of people are requesting an ambulance due to conditions affecting the heart.
​  ​Fact No.3: Hundreds of thousands of excess deaths are being recorded around the world on a weekly basis, but only a small minority can be attributed to Covid-19.
​  ​Fact No.4: Age-standardised mortality rates are lowest among the unvaccinated population in every single age group.
https://www.globalresearch.ca/pfizergate-official-government-reports-prove-hundreds-thousands-people-dying-every-single-week-due-covid-19-vaccination/5790262
​I have been saying this for over a year, since this data was leaked. I advised every pregnant woman to avoid the vaccines and to take 5000 units per day of vitamin-D.
​44 Percent of Pregnant Women in Pfizer Trial Lost Their Babies; FDA and CDC Recommended Jabs For Expectant Mothers Anyway
https://amgreatness.com/2022/08/16/report-44-percent-of-pregnant-women-in-pfizer-trial-lost-their-babies-fda-and-cdc-recommended-jabs-for-expectant-mothers-anyway/
​  The Pfizer data remain incomplete, and I'm sure Pfizer wants them to. Some UK data is detailed here.

However, our analysis proved that these numbers were extremely misleading due to the fact that of the 827 completed pregnancies, 700 / 86% of the women had received a dose of either the Pfizer or Moderna Covid-19 vaccine during the third trimester of pregnancy, meaning it was impossible for them to suffer a miscarriage due to the fact they can only occur prior to week 20 of pregnancy.
This meant that just 127 women received either the Pfizer or Moderna Covid-19 vaccine during the first/second trimester, with 104 of the woman sadly losing their baby.
Therefore the rate of incidence of miscarriage was 82%, not 12.6% as presented in the findings of the study, and the authors of the study have since admitted that they made a mistake, issuing a correction six months too late because the study has been used to justify Covid-19 vaccination of pregnant women and new mothers around the world.   https://expose-news.com/2022/08/15/9-in-10-covid-vaccinated-women-lose-baby/

Charles Hugh Smith, Deglobalization Is Inflationary​   Charles goes on to say that it's bad for corporate profits, too. Prices were held down by moving manufacturing and pollution to China, Mexico and Vietnam, but profits skyrocketed. The reverse situation will reduce profits, increase prices, and move manufacturing and pollution back to the western countries, like the US, which have environmental protection laws and worker's rights. (All this as we go into another iteration of oil prices too high for consumers and industry but too low for producers.)   https://www.oftwominds.com/blogaug22/globalization-inflationary8-22.html

Oil production is at something of a limit globally, with prices going up and down as people can and can't afford gasoline, and draws on the big holding areas, like Cushing Oklahoma, following consumer demand up and down as prices go down and up. It's jittery, like 2008. What happened right after the expensive-oil-jitters?
WTI Rises After API Shows Huge Gasoline Draw
https://www.zerohedge.com/markets/wti-rises-after-api-shows-huge-gasoline-draw
​  Art  Berman explains my statement above in better detail. Thanks Red,  ​PARADIGM SHIFT: END OF THE OIL AGE
https://www.artberman.com/2022/08/15/paradigm-shift-end-of-the-oil-age/
​  Doug sent this 2017 article about a big development program for the Netherlands, Germany, Belgium and France, making a huge megacity to compete on aworldscale, "so EU cities would not compete with each other"​ (huh?). Sounds like a scam to me. Is this development scheme what the Dutch farmers are having to fight to the death?   https://www.dutchnews.nl/news/2017/10/dutch-investors-launch-new-marketing-programme-for-nl-tristate-city/
The fallout, soot and atmospheric disturbances would destroy crops in multiple ways and supply lines would break badly. Most people would die within 2 years.
US-Russia Nuclear War Would Kill 5 Billion From Famine Alone: Study
https://www.zerohedge.com/geopolitical/us-russia-nuclear-war-would-kill-5-billion-famine-alone-study
​Everybody is supposed to pretend that Ukraine can win against Russia with more money and advanced weapons.
​Western countries waiting for 'fall of Ukraine' – Kiev
The foreign minister says he is often asked by some of his counterparts how much longer his country can hold out
https://www.rt.com/news/560942-west-anticipates-ukraine-surrender/
This article says, yes, of course Ukrine will be partitioned, as the author has been saying for 6 years. The bigger question is that of Russia's war with the distributed western oligarchic financialized capitalist system, a resource-extracting system, which is "not agreement capable", because no entity can guaranty the cessation of attacks by the other oligarchs and their minions. The war is not between Russia and Ukraine, or NATO, or the US or EU, but between financial regimes. Russia champions a new regime, almost alone, and will have to do so for-the-duration of the war, until the western neoliberal financial system collapses. Othe countries like China, Iran, Turkey and India will continue to take cae=reful steps as the situation becomes more certain, and supporting their national interests.
Will the Ukraine be partitioned next and, if so, how?
http://thesaker.is/will-the-ukraine-be-partitioned-next-and-if-so-how/
​  Pepe Escobar from Samarkand, Escobar basically states that Afghanistan will never get her $9 billion from New York​, so Russia is ramping up to supply food and fuel aid and China is working on finances, railways and roads, which will criss-cross the vast Eurasian landmass, benefitting trade between Russia and Iran, landlocked countries and Pakistani ports, and so on. It is a newer-world-order, under attack from existing financial imperialist forces.
A Eurasian jigsaw: BRI and INSTC interconnectivity will complete the puzzle
http://thesaker.is/a-eurasian-jigsaw-bri-and-instc-interconnectivity-will-complete-the-puzzle/
​  ​Putin’s Syrian Peace Plan with Erdogan
​T​urkey and Syria used to have "brotherly" relations, very good, until US/NATO/Israel decided to destabilize and regime-change Syria, and got Turkey/Erdogan on board. It didn't work, and the same team that tried to get rid of Assad tried a coup/murder plot against Erdogan, which did not work because Putin warned him just in time to save himself. Now there is a Russian/Syrian/Turkish peace process beginning. I hope it does well. Everybody can do better than they have been doing lately.
https://www.globalresearch.ca/putin-syrian-peace-plan-erdogan/5790040
Probably not part of Putin's or Assad's plans...
​  ​Tuesday into Wednesday has witnessed heavy fighting between Kurdish YPG and Turkish forces along the Syrian border town of Kobane, at a moment Turkish President Erdogan's planned large scale cross-border offensive looms. Already there are Turkish media reports claiming that a Turkish military convoy has entered Jarablus, northern Syria - with unverified social media photos circulating that purport to show convoys amassing.
​  ​Turkish shelling of Syrian Kurdish positions has reportedly killed and wounded civilians including a 14-year old child. And a series of airstrikes have hit Syrian government border posts, killing 17. However, it's unclear how many among these were Syrian national troops, Kurdish militia fighters, or pro-government militia members who fight alongside the army.
https://www.zerohedge.com/geopolitical/turkey-attacks-northern-syria-killing-least-17-cross-border-offensive-looms
This is from an Indian perspective. I personally think that distributing chip production, like getting Texas instruments back online is good, but it can't be big or fast enough to ameliorate what is set to happen. Nations will act in their own interests, but say whatever they want to say to control people.
Semiconductor Crisis: China-Taiwan Standoff Might Increase Global Chip Shortage
https://www.globalresearch.ca/semiconductor-crisis-china-taiwan-standoff-might-increase-global-chip-shortage/5790297
My read of US domestic politics continues to be that there will be a shift to the other side of the neoliberal uniparty, with an attempt to declare things fixed and the crisis over,and America almost great again. I don't think it can work until the corruption is really rooted out, which has not begun.
The FBI raid on Mar a Lago seems to consolidate Trumps power-position in the Republican party.​
https://www.zerohedge.com/political/fbi-raid-has-solidified-trumps-clout-gop-ahead-expected-2024-run-conservative-observers
There is a surge in FBI whistleblowers coming forward to Republican elected officials.
Expect legal pressurestobe brought to bear on high level bereaucrats and Democratic elected officials after midterms.
14 FBI Whistleblowers Have Come Forward: Rep. Jordan
https://www.zerohedge.com/political/14-fbi-whistleblowers-have-come-forward-rep-jordan
Hours of fun... This is bound to get a few days of sensational headlines and pictures of Melania's closet. November is getting closer.
Eric Trump Says He’ll Release FBI Raid Surveillance Tape
https://www.zerohedge.com/political/eric-trump-says-hell-release-fbi-raid-surveillance-tape
​Not Holding Breath (pictured with banana-jungle part of vegetable garden experiment)​ 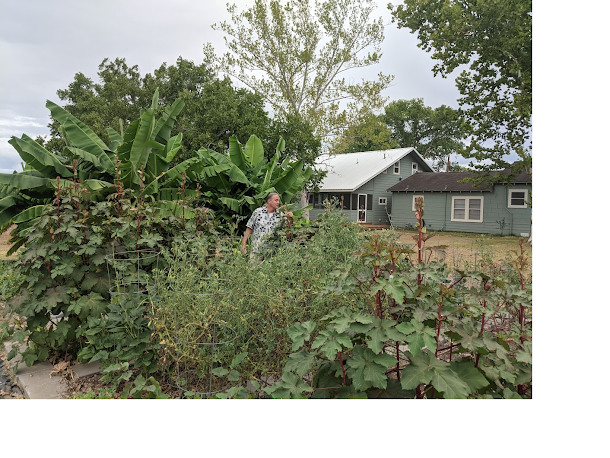