​Indoctrinated,​
When President Trump nominated the representative from Kansas, Mike Pompeo, as Director of the CIA, we interpreted this unexpected nomination in terms of the President’s difficulty to find allies in the Republican Party which he had just over-run. We had forgotten that from 2006 to 2010, Pompeo had been the CEO of the hydrocarbon equipment supplier Sentry International. He knew how the oil market worked, and knew personally the world’s main actors. At the same time, President Trump nominated Rex Tillerson as Secretary of State. Tillerson had been the CEO of one of the major hydrocarbon companies, Exxon-Mobil...
It is obviously impossible today to estimate the extent of Pompeo’s actions as head of the secret service. However, we may entertain the thought that his older objectives may not be too far removed from those he defends today...
The 2019 Congress (CERAweek, 9 to 13 March, in Houston, Texas) was the largest international meeting in History on this subject. The CEOs of the main companies of 78 countries were present. Top of the bill was the speech by Mike Pompeo. The whole profession had been notified of the importance of his intervention, and this was the only moment at which the huge room was chock-full.
After having saluted his ex-colleagues, Mike Pompeo expressed his pride for the incredible performances of his country’s oil industry, which, in six years, had become the world’s major oil producer, thanks to new techniques for the extraction of shale. He announced that he had created a special bureau in the State Department tasked with managing energy resources. From now on, the directors of specialised US companies would have to talk to him. His mission was to help them to win markets overseas. In exchange, they must agree to help their own country to apply his energy policy.
This consisted both of producing as much as possible in the United States, and also drying up a part of the world offer in order to balance the market. This is the only way that the country would be able to sell shale oil and gas, since their extraction is particularly expensive.
According to the Pompeo doctrine, it is not a question of reducing world production to the level of demand per quotas of production, such as the OPEP+ has instituted for the last two years, but by closing the door on certain large-scale exporters - Iran, Venezuela and Syria (whose gigantic reserves were discovered only recently, and are not yet being exploited).​..​

Besides this,the US Treasury Department is blocking all means of transport for Iranian and Venezuelan oil, and also deliveries to destinations in Syria...
The attitude of the White House towards Syria is different, insofar as this country is currently unable to exploit its reserves, and Russia is allowing time to pass. The aim is to prevent reconstruction and therefore make life impossible for its people. The CIA is implementing an intense strategy of sabotage against any form of energy supply. The majority of the population, for example, has no more gas for heating their homes, nor for cooking purposes. Worse, a Turkish petrol tanker which was transporting Iranian product to Syria was sabotaged off the port of Latakia. The ship exploded, causing the deaths of its entire crew and a vast oil slick which the Western Press did not even mention...
Mike Pompeo is attempting to impose a new distribution of territorial waters which would re-route Lebanese oil tankers under Israëli sovereignty...
For the moment, Donald Trump’s policies can only succeed by diminishing US demand. Until now, hydrocarbons were mainly used to fill automobile petrol tanks, which explains the development of projects for electric cars. Consuming petrol in order to supply electricity is much less expensive in the United States than using it directly in car motors. Above all, electricity can be supplied from various sources on US territory, inexpensively and at stable prices.
It is important to note that the development of electric vehicles has hardly any connection with the ideology according to which we must decrease the production of CO2 to bring down the temperature of the Earth.​..
The United States will not allow the export of hydrocarbons from Iran, Venezuela and Syria until 2023 or 2024, the date at which their shale production will begin to decrease rapidly, according to the International Energy Agency (IEA). Once again, the entire geopolitical structure will be overturned.  Thanks Eleni.​
https://www.voltairenet.org/article205987.html

What "new world order" are we up to now?


Russian Foreign Minister Sergei Lavrov declared today that the Western, liberal model of society is dying, and a new world order is taking its place. Lavrov made the comments at his annual meeting with students and professors at the Foreign Ministry’s Diplomatic Academy, reported Russian state news agency TASS.
“The Western liberal model of development, which particularly stipulates a partial loss of national sovereignty – this is what our Western colleagues aimed at when they invented what they called globalization – is losing its attractiveness and is no more viewed as a perfect model for all. Moreover, many people in the very western countries are skeptical about it,” Lavrov said...
“The US and its allies are trying to impose their approaches on others,” Lavrov noted. “They are guided by a clear desire to preserve their centuries-long dominance in global affairs although from the economic and financial standpoint, the US – alone or with its allies – can no longer resolve all global economic and political issues,” he said.
“In order to preserve their dominance and recover their indisputable authority, they use blackmail and pressure. They don’t hesitate to blatantly interfere in the affairs of sovereign states.”

“Haftar would not be a player today without the foreign support he has received,” a Libyan affairs expert told The Wall Street Journal in a new lengthy profile of the Benghazi-based General Khalifa Haftar, whose Libyan National Army (LNA) is advancing this week on Tripoli.
As Haftar consolidated power over much of the country's war ravaged east, also making huge gains in the past year over the south, he's all along enjoyed the political backing of an unlikely assortment of powerful countries that include the United Arab Emirates, Egypt, France, and Russia. But the new WSJ report reveals his latest major external backer with endlessly deep pockets:
Days before Libyan military commander Khalifa Haftar launched an offensive to seize the capital and attempt to unite the divided country under his rule, Saudi Arabia promised tens of millions of dollars to help pay for the operation, according to senior advisers to the Saudi government...
But apparently, the Saudis and possibly other backers are actually funding the assault on Tripoli, and further securing weaponry. The WSJ continues:
Mr. Haftar accepted the recent Saudi offer of funds, according to the senior Saudi advisers, who said the money was intended for buying the loyalty of tribal leaders, recruiting and paying fighters, and other military purposes.
“We were quite generous,” one of the advisers said.
The report also notes that with his so far rapid advance west, more previously reluctant European officials are jumping on the Haftar train. As we noted previously, "Libya's incoming strongman will send the oil out to Europe, and keep its migrants in." ..
It should be noted that the likelihood is that he's already long been the CIA's man in Libya. What's not often stated outright is that Haftar is an American citizen, as recounted in a CNN profile this week: "Haftar is, to be polite, the ultimate pragmatist. He supported Moammar Gadhafi in his 1969 coup, then found himself in Langley, Virginia in the 90s where he gained US citizenship, before returning to overthrow Gadhafi in the 2011 conflict."
While in exile in the US he lived a mere minutes from CIA headquarters: "As a military commander, Mr. Haftar broke with Ghaddafi in the 1980s and became part of a C.I.A.-backed effort to destabilize the Libyan regime. He then spent two decades in exile in the U.S., before returning to join the rebellion in 2011," according to the WSJ report.
Interestingly, though the White House has urged Haftar to avoid military conflict while pulling a contingency of Marines from the country, Bolton's comments to the WSJ reveal that "condemnations" of Haftar's offensive might be coupled with a wink and a nod:

There is really only one unforgivable sin in the political realm, and that's destroying the official narrative by revealing the facts of the matter. This is why whistleblowers who make public the secret machinery of the elaborately artful lies underpinning all official narratives are hounded to the ends of the Earth...
Employees of state entities such as Ellsberg, Manning and Snowden are bound by vows of secrecy and threatened by the promise of severe punishment.Outsiders such as Assange are even further beyond the pale because they can't be accused of being traitors, as they never took the vows of secrecy required by the Deep State.
The single most damaging revelation to all the elaborate lies that make up official narratives is the truth revealed in official emails, documents and conversations. This is why virtually every document and correspondence is now "classified," so anyone releasing even a mundane scrap can be sentenced to rot in federal prison..​.​
In the immortal words of Jean-Claude Juncker, when it becomes serious you have to lie, and it's now serious all the time.
The entire global status quo is on the cusp of the S-Curve decline phase. Hence the vulnerability to disruption of its official narratives and the panicky paranoia of its handlers.

​Moon of Alabama:  ​CIA's Vault 7 Files Launched New Case Against Assange - Attack Intends To Prevent Further Leaks
After the arrest of Julian Assange by British police and the unsealing of the U.S. indictmentagainst him, the question is why is the U.S. doing this and why now? ...
It is thus likely that the case, as unsealed now, is only a pretext to extradite Assange from Britain. The real case will only get unsealed if and when Assange is in U.S. custody.
National security reporter William Arkin, who left NBC News over its warmongering, is likely right when he writes that the issue behind this is Wikileaks' publishing of the CIA's hacking tools known as Vault 7...
The American case, which shifted completely in March 2017, is based up WikiLeaks’ publications of the so-called “Vault 7” documents, an extensive set of cyber espionage secrets of the Central Intelligence Agency.
Vault 7 was little noticed in the emerging Russian collusion scandal of the new Trump administration, but the nearly 10,000 CIA documents that WikiLeaks started publishing that March constituted an unprecedented breach, far more potentially damaging than anything the anti-secrecy website had ever done, according to numerous U.S. officials.
“There have been serious compromises – Manning and Snowden included – but until 2017, no one had laid a glove on the Agency in decades,” says a senior intelligence official who has been directly involved in the damage assessments.
“Then came Vault 7, almost the entire archive of the CIA’s own hacking group,” the official says. “The CIA went ballistic at the breach.” The official is referring to a little known CIA organization called the Center for Cyber Intelligence, a then unknown counterpart to the National Security Agency, and one that conducts and oversees the covert hacking efforts of the U.S. government.
https://www.moonofalabama.org/2019/04/assange-vault-7.html#more

​Theresa May is doing all that she can to betray British Citizens.​
Not scared of "no-deal-Brexit"? This might change that...
The government has halted all emergency planning for a no-deal Brexit despite committing £4bn to preparations, according to reports.
A leaked email reportedly sent to all civil servants in an unnamed “front line Brexit department” said no-deal operational planning had been suspended with “immediate effect”.

(Included are pictures from the new garden in Yoakum and the old garden in Austin from this weekend, including John and Jenny.) 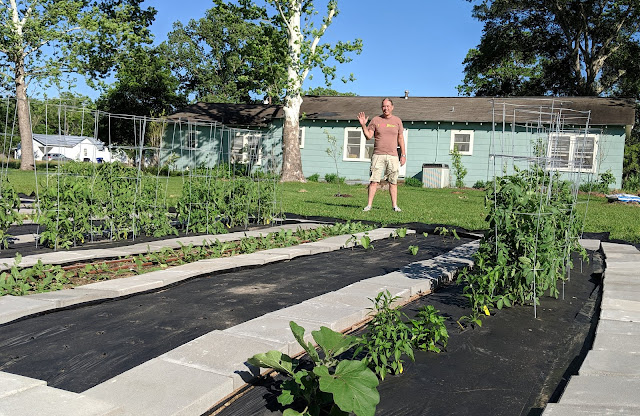 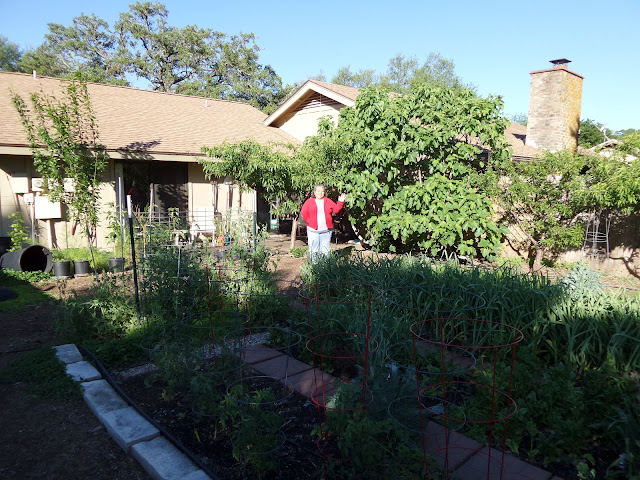