The social contract in the US was worked out during Franklin Roosevelt's administration, spanning the Great Depression and WW-2.
This social contract has been amended and corrupted many times, but generally assumes protections of freedoms guaranteed in the Constitution and a social safety net of some sort, so children don't starve and die in the world's richest country.
Roosevelt had enemies in the elites of his epoch, and there was a failed coup. He may  have been poisoned.
Power elites do not willingly share. The role of power elites is to profit from the herd and cull the herd when it gets so big that it exhausts the resources upon which it relies for sustenance.
We are now in the reset of the economy, and necessarily, the reset of the social contract in the US. I don't directly address other nations. Russia has a healthy social contract. China has a social contract which probably needs more work, but it is functional. India will have a hard time really creating a new social contract, as it has since the Brits left it internally divided.
The risks and benefits to the world from a renegotiated American social contract are great. Everybody's watching.
It's not all decided within the US at this point. Global wealth and powerful transnationals have a lot of say, and they speak powerfully, yet in hidden riddles, which the herd is not allowed to know.
We Americans still have The Patriot Act, which has eroded our constitutional rights. It did not time-out as promised.
The power to indefinitely detain without trial is now being requested by the "justice" department.
Freedom of speech is conditioned upon political correctness, which is defined by Zuckerberg's Facebook.
This morning in Austin, one must be prepared to show a letter to a police officer, stating the social criticality of one's travel to home and work. I did not print mine, but I have "good facts" to support me on my bike ride.
Freedom of association is now "virtual", and subject to Zuckerberg, NSA, CIA, etc.
The new social contract is being imposed by power and financial elites through enforcement of public health measures, which have been amazingly effective in Austin on a voluntary basis, through the shared efforts of a community which has not been noticeably touched yet by the contagion. I support the voluntary public health measures, and have been very proud of Austin.
This is a grab to lock in absolute power by the overlords, who see that this is finally the big reset.
I'm a member of the herd. I see what this is. I don't have sharp teeth, but I have my horns and my good health.

Thanks to Anthony for the story that contained this link:
WUHAN’S OUTBREAK: CHINA DEMANDS AN HONEST ACCOUNTING
The following content is circulating in Chinese cyberspace.
Looks like China is finally in counterattack mode against relentless US efforts to blame it for the global COVID epidemic.
Key points:
• It is now virtually certain that COVID-19 was brought to Wuhan by American troops taking part in the city’s World Military Games last Oct. 18-27.
• The 300-st​r​ong US contingent stayed at the Wuhan Oriental Hotel. It is located a mere 300 meters from the Huanan Seafood Market, where China’s outbreak began (see map below).
• Five of the US troopers developed a fever on Oct. 25 and were taken to an infectious-diseases hospital for treatment.
• 42 employees of the Oriental Hotel were diagnosed with COVID-19, becoming the first cluster in Wuhan. At the time only 7 people from the market were thus diagnosed, though they were treated first. All 7 had contact with the 42 from the hotel. From this source, the virus spread to the rest of China.
• Back in the US, the American team had trained at a location near Fort Detrick, the military’s viral lab closed down in July for various deficiencies.
The big question now is whether the transmission was planned, or accidental. Chinese authorities are awaiting an explanation from US authorities.

​Eric sent these stories about the US bioweapons facility at Ft, Detrick being closed for "breaches" in July, and opened back up for business in November.​
8/2/19: “We are coordinating closely with the CDC to ensure that critical, ongoing studies within bio-containment laboratories are completed under appropriate oversight and that research animals will continue to be cared for in accordance with all regulations,” she said in an email. “Although much of USAMRIID’s research is currently on hold, the Institute will continue its critical clinical diagnostic mission and will still be able to provide medical and subject matter expertise as needed to support the response to an infectious disease threat or other contingency.”
https://www.fredericknewspost.com/news/health/fort-detrick-lab-shut-down-after-failed-safety-inspection-all/article_767f3459-59c2-510f-9067-bb215db4396d.html
11/24/19:​ ​The Army's premier biological laboratory on Fort Detrick reported two breaches of containment earlier this year, leading to the Centers for Disease and Control halting its high-level research.
​ ​The U.S. Army Medical Research Institute of Infectious Diseases announced Friday that it would restart its operations on a limited scale.

​NATO war games to scare Russia are back on-track, without precautions inside pandemic-Europe. Thanks Eleni:
(What could go wrong?)
​ ​The goal is without a doubt to have a show of force against Russia, the main target of these massive exercises by NATO. Although this may seem like a simple reason, NATO needs to show Russia that they can organize such exercise in a demonstration of aggression even in times of uncertainty and crisis. The exercises could easily have been cancelled, because there is no reason for them to be held right now and in such conditions, but conducting them during a pandemic shows greater strength by NATO – or so they think.
https://theduran.com/nato-exercises-defying-coronavirus-reveal-desperation/

​Prince Charles of England tests positive for crown-virus. God Save The Queen!
(I want to know what treatment Charles gets, and the CDC should want to know, too.)​
https://www.zerohedge.com/geopolitical/prince-charles-heir-british-throne-tests-positive-tokyo-reports-largest-jump-new-covid

Health care workers are calling attention to a potential new symptom of a novel coronavirus infection: the loss of one’s sense of smell.
​ ​Clinicians in the U.S. and elsewhere around the world have reported, anecdotally, that some patients infected with the virus experience anosmia, or an inability to smell. The American Academy of Otolaryngology recently called for anosmia to be added to a list of screening tools for Covid-19, the disease caused by the virus. On Monday, World Health Organization officials announced they were further probing a possible link between anosmia and coronavirus — though they noted the evidence of a potential connection remains preliminary.

Voters smell a rat as coronavirus-soaked primaries unfold in Illinois, Arizona & Florida… but they don’t want them canceled either​ (From last week, from Helen ​of DesTroy​, Massively, pre-emptively, pervasively and creatively rigged primaries to nominate Joe Biden, not Bernie Sanders were successful. Here's how.)

​Moon of Alabama looks at lockdowns, and how to gradually relax them after they deliver benefits, without getting a second bloom of contagion.​ (Mainly, I've got to have the Venn Diagram)
https://www.moonofalabama.org/2020/03/coronavirus-how-to-lift-lockdowns-and-why-we-should-all-wear-masks.html#more 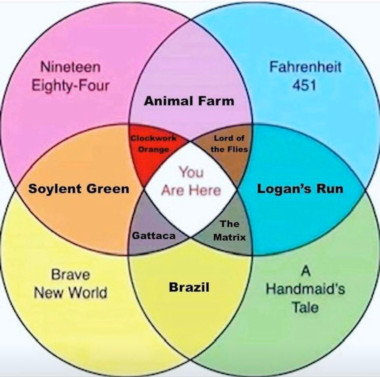 ​Gilead Pharmaceuticals got a special "orphan drug" classification for remdesivir, which allows them to make massive, unregulated profits for 7 years. Some say this is unfair to the rest of us.
(I say Gilead will want Prince Charles to take remdesivir and do well. If the prince of Wales does not get treated with remdesivir, it's a bust. Coronavirus infection is risky for the royal test-rat, any way you look at it.)​
https://theintercept.com/2020/03/23/gilead-sciences-coronavirus-treatment-orphan-drug-status/

Bold Vlad update:
​ ​A day after Putin donned a hazmat suit for a 'high risk' photo op while visiting Covid-19 patients at a hospital outside Moscow, the Russian president gave an important address to the nation, updating the country on new drastic measures amid the pandemic, starting with urging the country to "stay at home" and a declaring a week-long work holiday toward that end.
​ ​Importantly, Putin declared the postponement of a national referendum on constitutional amendments originally scheduled for April 22 to "a later date".
https://www.zerohedge.com/geopolitical/putin-postpones-controversial-national-referendum-after-covid-19-cases-jump-overnight

​We are all somewhere on this graphic:

​Globalization, following the money across the globe and back in time​ , Louis Latham, Thanks Wiggs, seriously good...
https://www.laphamsquarterly.org/trade/globalization

Crony Capitalist
Posted by John Day at 10:54 AM