Nice $4 bumper stickers, and 5 for $18; yard signs, too. These could be as much a collectors-item as the "Bush is a Punk-Ass Chump" bumper stickers I saw a decade ago.

Hillary Clinton's VP short list advertises Elizabeth Warren (head-fake) and looks to deliver passable weasels with demographic appeal, like Julian Castro and Tim Kaine. (Of the two, Hispanic Castro is likely the better bet, since he has left very little record by which to judge him, and he has a twin-brother-stunt-double.)
http://www.truth-out.org/news/item/36642-hillary-clinton-s-vp-short-list-is-short-on-progressives

Recent NATO Commander , (USAF ret.) General Philip Breedlove ("Strangelove"), who seemed publicly inflammatory against Russia, and announced Russian military build-ups that NATO allies could never find, is revealed by leaks to have been maneuvering behind the scenes to create his own aggressive foreign policy against Russia. Obama just couldn't seem to see his logic and "engage" properly. (We could see this guy as Secretary of Defense, with Victoria Nuland as Secretary of State in a Clinton administration.)
https://theintercept.com/2016/07/01/nato-general-emails/ 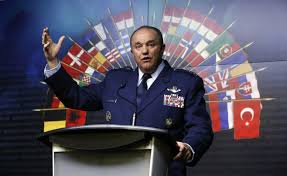 The Parliament of (boy-did-they-get-robbed) Cyprus is prepared to vote upon the end of anti-Russian sanctions, against the will of friends-of-Breedlove.
http://sputniknews.com/politics/20160702/1042320209/cyprus-parliament-russian-sanctions.html

Hungarian President Viktor Orban (still in office despite famously poor manners), has repeatedly battled neoliberal colonialism to stalemates in Hungary. Now he proposes a referendum, so that he will have the leeway to integrate better with the EU (unless the vote swings against that, of course).
"We need to fight to prove to people that it is possible to form an EU migration policy that is in line with the Hungarian national interest," Orban said days after the Brexit vote. "This is going to be a long struggle for which I will need a strong mandate, which cannot be ensured without a referendum," said Orban, who is in favor of remaining in the EU but wants more powers for member states.   http://www.reuters.com/article/us-britain-eu-hungary-orban-idUSKCN0ZH54H
Czech Presidents wants referenda on membership in EU and NATO (which is not in line with many other Czech politicians, but may be at an opportune moment).  https://www.rt.com/news/349149-zeman-eu-czech-referendum/
Trash-by-numbers, How trashy is your state?  http://www.treehugger.com/environmental-policy/trash-numbers-startling-statistics-about-americans-and-their-garbage.html

Book Review: The Scoop on Poop   http://fromfilmerstofarmers.com/blog/2016/july/book-review-the-scoop-on-poop/      "Thanks to the hype-mongers, swirly light bulbs and cars running on souped-up rechargeable triple-A batteries get pretty much all the attention when it comes to sustainability issues. But as Chiras again correctly puts it, "True sustainability can only be achieved by ensuring that your excretions make it back to their rightful place in nature." In short, we have to compost our humanure."
Here is an unusually practical, efficient, and purportedly easy to build tiny house design.
https://padtinyhouses.com/books-plans/hikari-box-tiny-house-plans/#!prettyPhoto