A hero falls in the line of duty. He was threatened to shut up or face consequences in December, forced to retract his statements:
The Chinese doctor who tried to raise the alarm about the new coronavirus before it was even identified has died of the deadly virus.
Dr. Li, 34, was hospitalized on January 12 after contracted the virus from his patient, and he was confirmed to have the coronavirus on February 1, and The World Health organization has just confirmed his passing.
https://www.zerohedge.com/health/original-china-virus-whistleblower-doctor-dies

Dr Li is in good company if this story is true, and it has the look of truth trying to leak out.
These numbers fit with the behavior of Chinese authorities much better than the official numbers do.
Maybe the WHO is praising Chinese "transparency" with THEM, not the-little-people.
Mike Adams has been working hard on the Wuhan coronavirus news. I am always careful accepting his work without careful analysis (he's excitable), but this is the second story of his which is impressively good. This story first broke in my world on Zero Hedge, but Adams has spent another day of filling it out. It seems that the computer program is automatically coming u with numbers from the database, and they have inadvertently been released for a few seconds, a couple of times, and captured in screenshots, before being replaced with officially sanctioned numbers. This death toll is over 24,000, 50 times higher than officially reported.
https://www.naturalnews.com/2020-02-05-china-two-sets-of-coronavirus-pandemic-numbers-leaked-data-deaths.html
https://www.zerohedge.com/health/did-chinas-tencent-accidentally-leak-true-terrifying-coronavirus-statistics

The DNC took over counting, reportedly counting precincts considered to be Sanders strongholds last, but I'm sure their numbers will be accurate... It's bedtime for Uncle Joe.
Buttigieg and Sanders separated by razor-thin margin with Iowa count nearly done
The former South Bend mayor is locked in a tight race with Sanders after a technical meltdown created havoc in reporting the results

​I​mmediately after President Trump and Israeli Prime Minister Netanyahu's roll out of the 'deal of the century' Mideast peace plan on January 28, Turkey was the first country to condemn it internationally, and just days ago Erdogan’s director of communications, Fahrettin Altun, called it "a declaration of war, not a peace plan".
​ ​In a stunning revelation Wednesday, Bloomberg now reports that President Erdogan says the US is threatening him and Intelligence Chief Hakan Fidan over Turkey's rejection of the plan.

After not freezing since mid November, the garden got snow in the night. Here's Jenny at dawn. 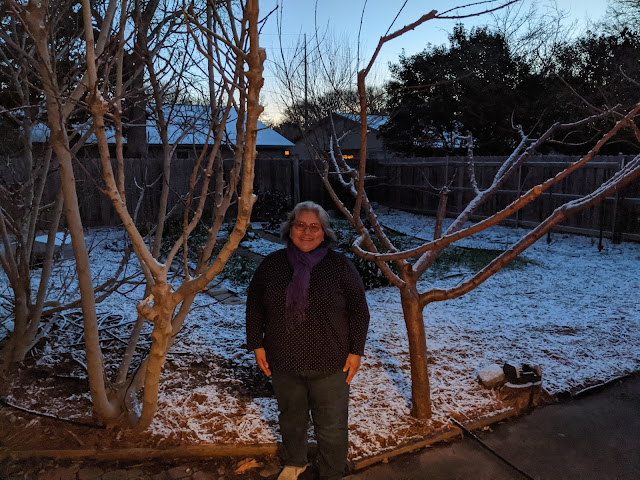