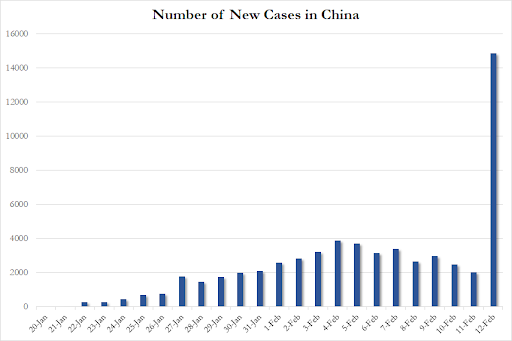 ​You may recall Ben Hunt's analysis, which I posted yesterday.
China needs a new narrative for this exponentially growing problem.
​I believe that the Chinese government is massively under-reporting infection data in the pandemic regions of Hubei and Zhejiang provinces.
Just like the American government massively over-reported North Vietnamese casualty data in the Vietnam War.
It’s not only that I believe the numbers coming out of China are largely made up.
More importantly, I also believe that Chinese epidemic-fighting policy – just like American war-fighting policy in the Vietnam War – is now being driven by the narrative requirement to find and count the “right number” of coronavirus casualties.https://www.epsilontheory.com/body-count/

​ ​The reported militarization of Wuhan's P4 Lab has raised new questions about the origin of the Covid-19 virus and the apparent cover-up that has occurred since it was first made public.
​ ​Following the removal of the most senior health officials in Wuhan yesterday, Chinese State Media has just reported that Chen Wei, China's chief biochemical weapon defense expert, is now to be stationed in Wuhan to lead the efforts to overcome the deadly, pneumonia-like pathogen.
​ ​According to the PLA Daily report, Chen Wei holds the rank of major general, and along with reports that Chinese troops have started to "assist", it strongly suggests that the PLA has taken control of the situation.
https://www.zerohedge.com/geopolitical/sudden-militarization-wuhans-p4-lab-raises-new-questions-about-origin-deadly-covid-19

​ ​U.S. Northern Command is executing plans to prepare for a potential pandemic of the novel coronavirus, now called COVID19, according to Navy and Marine Corps service-wide messages issued this week.
​ ​An executive order issued by the Joint Staff and approved by Defense Secretary Mark Esper this month directed Northern Command and geographic combatant commanders to initiate pandemic plans, which include ordering commanders to prepare for widespread outbreaks and confining service members with a history of travel to China.
​ ​The Navy and Marine Corps messages, issued Tuesday and Wednesday, respectively, reference an executive order directing U.S. Northern Command to implement the Department of Defense Global Campaign plan for Pandemic Influenza and Infectious Diseases 3551-13.

​This is very important basic science research. Wuhan coronavirus binds to ACE-2 receptors, deep in the lungs. Everybody has them. Some people have more.
It has been speculated that older men and Asians have more.
Well, yes, if older Asian men smoke more tobacco. BINGO!​
In this study, we investigated the disparities related to race, age, gender and smoking status in ACE2 gene expression and found significantly higher ACE2 gene expression in lung tissue of smokers compared to that of non-smokers. This may explain the reason why more males (56% of 425 cases) were found in a recent epidemiology report of 2019-nCov early transmission by China CDC11. We didn’t observe significant disparities in ACE2 gene expression between racial groups (Asian vs Caucasian), age groups (>60 vs <60) or gender groups (male vs female).
file:///C:/Users/John.MEADOWS/Downloads/preprints202002.0051.v1%20(1).pdf

​Elijah Magnier has Syrian-war update:
​ It is a new strategic turn in the Syrian war that Maarrat al-Nu’man, Khan Touman, Saraqeb, Tel el-Eiss, Rashedeen 4&5 are now liberated. It is an indication that Turkey will find it hard to protect its jihadists in the long run. The stability of Syria requires the liberation of its entire territory. Syrian stability is in the interest of Russia and its national security objectives. Russia walked into the Levant to stop the war. Its credibility is on the line. It has a large naval base offering unique access to the Mediterranean. It is also in the interests of Russia to eliminate al-Qaeda and all groups adhering to their takfiri ideology, notwithstanding their different priorities and names. The Uzbeks and Uighur jihadists in the Levant have no place to go and are expected to fight to the last man.
Turkey is showing its teeth to Russia by refusing to recognize Russian sovereignty of Crimea and offering 33$ billion to Ukraine in arms. Turkey is aiming for a more effective and recognized role in Libya where the central government is officially requesting Ankara’s support. However, the situation in Syria is different. Turkey knows its presence in Syria cannot last for long, and that the liberation of Idlib, even if it is not on the agenda today, will happen soon. It is only a question of time.
https://ahtribune.com/world/north-africa-south-west-asia/syria-crisis/3881-imposes-the-astana-deal-by-force.html

The Belief that Everything Will Be Fine Once Trump's Gone Is More Dangerous Than Trump, Caitlin Johnstone
https://caitlinjohnstone.com/2020/02/13/the-belief-that-everything-will-be-fine-once-trumps-gone-is-more-dangerous-than-trump/#comment-27621

War Correspondent
Posted by John Day at 9:47 AM