​  Low vitamin D levels could explain why African Americans and even African immigrants in Sweden appear to be disproportionately hard-hit by the coronavirus, regardless of socio-economic factors, researchers have suggested.
​ ​Vitamin D can protect against getting a severe case of COVID-19, a group of Swedish researchers and doctors have suggested in an article in the medical magazine Läkartidningen.

​ ​Covid-19 cases in France can be dated back to as early as November 16, nearly 10 weeks before the country’s first confirmed cases of the disease were thought to have occurred, according to a French hospital.
The November case was identified by the hospital’s medical imaging department after carrying out a retrospective study on about 2,500 chest scans performed between November 1 and April 30.

https://www.scmp.com/news/china/society/article/3083599/france-had-covid-19-november-hospital-says-after-analysis-chest
People who traveled from New York across the US in early March caused nearly 65% of coronavirus cases in the rest of the country

More Charles:
Surviving 2020 #3: Plans A, B and C
​ ​Readers ask for specific recommendations for successfully navigating the post-credit/speculative-bubble era and I try to do so while explaining the impossibility of the task.
​ ​As the bogus prosperity economy built on exponential growth of debt implodes, we all seek ways to protect ourselves, our families and our worldly assets.

The Fascists vs Franklin Roosevelt​, excerpts from longer essay on end of WW-II, by Matthew Ehret
​ ​Within America itself, the pro-fascist Wall Street establishment had been loosing a war that began the day anti-fascist President Franklin Roosevelt was elected in 1932. Not only had their attempted February 1933 assassination failed, their 1934 coup d’etat plans were also thwarted by a patriotic General named Smedley Darlington Butler. To make matters worse, their efforts to keep America out of the war in the hopes of co-leading the New World Order alongside Germany, France and Italy was also falling apart. A As I outlined in my recent article How to Crush a Bankers’ Dictatorship, between 1933-1939, FDR had imposed sweeping reforms on the banking sector, thwarted a major attempt to create a global Bankers’ dictatorship under the Bank of International Settlements, and mobilized a broad recovery under the New Deal...
​ ​Wall Street’s corporatist organizations were called out by FDR during a powerful 1938 speech as the president reminded the Congress of the true nature of fascism:
​ ​“The first truth is that the liberty of a democracy is not safe if the people tolerate the growth of private power to a point where it becomes stronger than their democratic state itself. That, in its essence, is fascism – ownership of government by an individual, by a group, or by any other controlling private power… Among us today a concentration of private power without equal in history is growing. This concentration is seriously impairing the economic effectiveness of private enterprise as a way of providing employment for labor and capital and as a way of assuring a more equitable distribution of income and earnings among the people of the nation as a whole.”​...

​ By the end of 1945, the Truman Doctrine and Anglo-American “special relationship” replaced FDR’s anti-colonial vision, while an anti-communist witch hunt turned America into a fascist police state under FBI surveillance. Everyone friendly to Russia was targeted for destruction and the first to feel that targeting were FDR’s close allies Henry Wallace and Harry Dexter White whose 1948 death while campaigning for Wallace’s presidential bid put an end to anti-colonialists running the IMF.
​ ​In the decades after WWII, those same financiers who brought the world fascism went straight back to work infiltrating FDR’s Bretton Woods Institutions such as the IMF and World Bank, turning them from tools of development, into tools of enslavement. This process was fully exposed in the 2004 book Confessions of an Economic Hit man by John Perkins.

​(Pictured below is your news aggregator holding first 3 Black Krim tomatoes from Yoakum garden, standing within form for concrete work slab, to go with workshop. We poured that slab yesterday, Monday 5/11/20. Thanks Randy and Roark!
It was another working weekend)​ 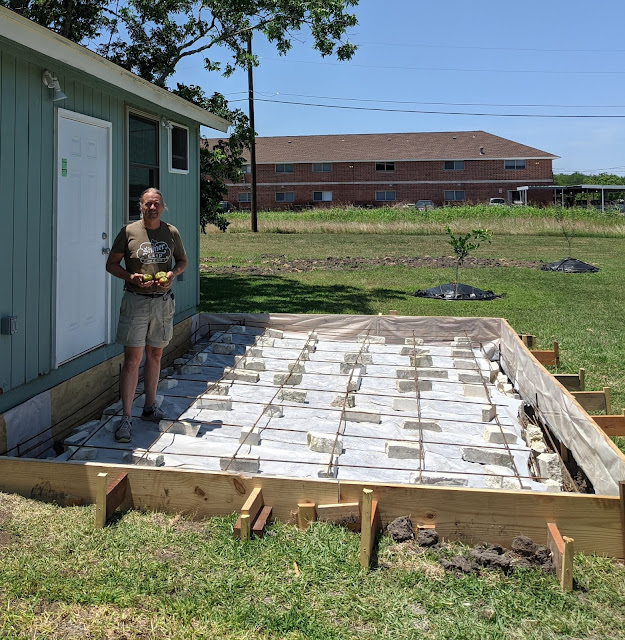