This post is from a 31 year old Internal Medicine doctor in San Antonio, the first to take on the "COVID cases" at her county hospital  a few months ago. (I feel the same way about this public ass-kissing, if I may be so indelicate.)
Happy Birthday, "Doc Holly Day".
​  ​I have a confession. The thank-you cards from schoolkids, and the heartfelt "God bless you's" over the phone from my patients' families, mean the world to me.

​  ​But there is an angry little demon in me that bursts into flames and stamps around, every time I see a corporate ad or corporate-funded demonstration of "support for our healthcare heroes." ​  ​
​  ​Frankly, I don't need free meals from fast food restaurants - I need you to give your workers health insurance and paid sick leave so that they don't go to work sick and infect the rest of your staff and half the customers.
​  ​I need you to treat your essential employees like human beings, and give them the resources to stay safe and out of my hospital.
​  ​Free fried chicken means nothing to me. But I will kiss the feet of the person who saves me from having to make another phone call to a young woman's mother, to talk about the decisions she will need to be ready to make if her daughter's respiratory failure gets worse.
​  ​American PEOPLE are mostly wonderful, and they are who I show up for every day. But our corporations and our political leaders have been pillaging the middle class and robbing workers for decades. They are relentless and without shame, even in this crisis.

That Moderna "vaccine" news blurb is bullshit to goose their stock prices for a quick profit.

They got that. Some suckers bought what the insiders sold.​
It's actually worse than this story in other ways. It actually injects genetic information into your body, targeting white blood cells, to commandeer them to produce what it codes for, which is about what a virus does, but this is supposed to be permanently implanted genetic information, "genetic engineering". It seems to have "taken" in 8 of 45 human subjects. What about the other 37? No word yet.
​The big fact not discussed is that coronavirus vaccines have ALWAYS killed too many of the test animals, not right away, but when they are exposed to the coronavirus.
The vaccine "works", but some patients always die...​
​https://www.statnews.com/2020/05/19/vaccine-experts-say-moderna-didnt-produce-data-critical-to-assessing-covid-19-vaccine/?utm_source=STAT+Newsletters&utm_campaign=f0e4a93e2c-MR_COPY_01&utm_medium=email&utm_term=0_8cab1d7961-f0e4a93e2c-152117102

The phone calls where Joe Biden demanded Petro Poroshenko fire the prosecutor who was investigating Hunter Biden's illegal dealings with Burisma were recorded.
Yep, Biden actually remembered what he said pretty well a few years ago.
He did blackmail Poroshenko to fire that prosecutor.
Poroshenko kept the recordings for posterity.
Who will the DNC pick to run this fall?
​https://www.zerohedge.com/geopolitical/phone-calls-between-quid-pro-joe-biden-and-ukraines-poroshenko-leak-explicitly-details

This is what we get instead of vitamin-D, free testing, and quick treatment.
The elite power struggle will continue, so the crisis needs to continue, too.
Maybe dousing the swamp with gasoline and torching it will be as good as draining it...
Senate GOP Compile Massive Subpoena List For FBI Abuse Probe; Demand Unredacted Susan Rice Letter

​  ​In the wake of bombshell evidence that shows the Obama DOJ inappropriately targeted the 2016 Trump campaign, Senate Republicans have compiled a list of 53 individuals they want to interview as part of their own comprehensive probe into the matter, separate of the Trump DOJ's separate criminal investigation headed up by US Attorney John Durham...
​ ​[former FBI Director] James Comey, [former FBI Deputy Director] Andrew McCabe, [former Director of National Intelligence] James Clapper, [former CIA Director] John Brennan, [former Deputy Attorney General] Sally Yates.
​  ​We note that the names of both President Obama and his VP Joe Biden are conspicuously absent, despite the fact that both of them were in a January 5, 2017 meeting in which Obama gave Comey the nod to conceal information from the incoming Trump administration.
https://www.zerohedge.com/political/senate-gop-compile-massive-subpoena-list-fbi-abuse-probe-demand-unredacted-susan-rice

CO2 emissions are directly proportional to economy in the modern world, despite sightings of rainbow unicorns.
Look what "20% down" means.
Carbon emissions down nearly 20% since lockdowns began
Possibly the largest drop in human history

Our Fate Is Sealed, Vaccines Won't Matter: Four Long Cycles Align
​Charles Hugh Smith​
​  ​A Covid-19 vaccine, or lack thereof, will have zero effect in terms of reversing these cycles. Call it Fate, call it karma, call it what you will, but the cycles have aligned and nothing can stop the unraveling of all that was foolishly presumed to be permanent.
​  ​We like to think we're in charge and that technology conquers all, but history moves in cycles that are larger than any person, corporation, elite or (gasp) technology. My first version of the chart below was drawn in 2008, when the Global Financial Meltdown revealed the cracks in the happy-story facade of permanent wonderfulness based on the amazing magic of borrowing / printing ever greater sums of currency, a.k.a. "money."​...​
​  In effect, the study of cycles is the study of human nature as it plays out in long-term social, political and economic dynamics. 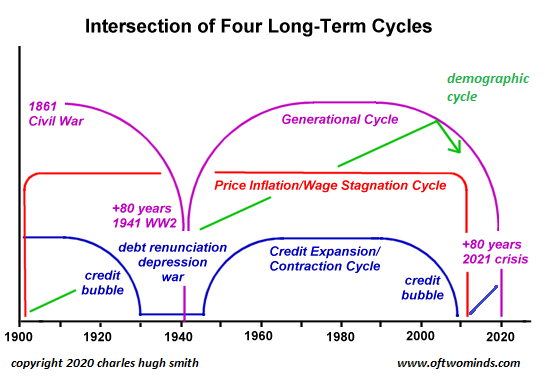 The four cycles depicted are:
1. The cycle of credit expansion and contraction, which is now in the final blow-off stage of unsustainable credit expansion (bubble) which will inevitably lead to renunciation of debt (credit collapse) and global depression.
2. The generational cycle (4 generations or approximately 80 years) of American history which leads to nation-changing social, political and economic upheaval (The American Revolution: 1781 +80 years = Civil War, 1861 +80 years = 1941, World War II + 80 years = 2021) as described in the book The Fourth Turning.
3. The 100+ year cycle of price inflation and stagnation of wages' purchasing-power which began around 1901 is now reaching the final stage of widespread turmoil, shortages, famine, conflict and crisis. (This can be viewed as aligned with Turchin's cycle of social disorder and disintegration.)
4. The demographic cycle: the workforce stops expanding and starts shrinking while the population of dependent elderly explodes higher, triggering a decline in earnings and the tax base just as taxes must increase to pay for the care of the rising population of elderly. (This is one dynamic in Turchin's deterioration in central state finances.)

​  ​Western Civ’s most infamous encounter with pandemic disease, so far, was the big first wave of the Black Death that had a marathon run from 1346 to 1353. That bug was the real deal. It killed folks left and right, every age group, every social station, and it killed them ugly. Few who caught it survived. Up to half the population of Europe perished, along with a lot of their social and economic ways.
​  ​The cause of the Black Death was subject to every possible explanation except the actual one, Yersina pestis, a bacterium associated with rats and their insect parasites, fleas and lice, who also enjoyed an association with humans living in the generally squalid conditions of the day ­— the ancient Roman habit of bathing long forgotten.​..

​  ​ On the plus side, as modern interpolators might say, the bubonic plague winnowed down Europe’s population to a scale more congenial with its resource base. After that big first wave of the disease, land was cheaper and human labor better rewarded. Eventually, more food got around.​..
​ Covid-19 seems rather a punk-ass illness compared to the Black Death...
​​  ​Spooky as it’s been, the Covid-19 virus has also been a great cover-story for the natural collapse of a severely unbalanced, ecologically unsound, and dishonestly represented set of arrangements that are now unspooling at horrifying speed.​..
​The big question about the Great Opening-up is when the recognition of all that turns to raw emotion. Covid-19 may still be with us then, but it will be the least of our problems. The masks will come off. The dance will commence.
https://kunstler.com/clusterfuck-nation/dance-macabre/

[..] a study from the Korean Centers for Disease Control and Prevention has found that patients who test positive for COVID-19 after recovering from the illness appear to be shedding dead copies of the virus. That would suggest that these patients are not infectious, the scientists said, which helped dispel fears that some patients can remain infectious for months after being infected. While the study doesn’t answer every question about the virus’s longevity – such as patients who almost appear to have developed a “chronic” form of the illness because their symptoms have persisted for so long.​..
​ The results mean health authorities in South Korea will no longer consider people infectious after recovering from the illness. Research last month showed that so-called PCR tests for the coronavirus’s nucleic acid can’t distinguish between dead and viable virus particles, potentially giving the wrong impression that someone who tests positive for the virus remains infectious.
https://www.zerohedge.com/geopolitical/breakthrough-south-korean-study-finds-recovered-covid-patients-who-test-positive-arent

​Must Sustain Crisis...​
(Please add vitamin-D today, and take zinc with hydroxychloroquine when needed.)
​  ​Doctors around the globe report that the malaria drug hydroxychloroquine seems the most effective treatment they've tried for coronavirus patients - but less than half as many doctors are prescribing it in the US as in other hard-hit countries like Spain.
​  ​A survey of 6,200 doctors around the globe reveals that while few corners of the world are untouched by the virus, the pandemic is being handled very differently from country-to-country.
​  ​And in some measures, the US continues to fall behind other nations' responses.
​  ​For example, an American waits an average of four to five days to get results back after being tested for COVID-19. Half of doctors in Europe and most in China get the test results back within 24-hours.

​Nancy Knows Best:
​  ​Speaker Nancy Pelosi (D-Calif.) said Monday that it's "not a good idea" for President Trump to be taking hydroxychloroquine as a potential treatment for coronavirus.
​  ​"I would rather he not be taking something that has not been approved by the scientists, especially in his age group and in his, shall we say, weight group, morbidly obese, they say," Pelosi said during an appearance on CNN's "Anderson Cooper 360."
​  ​"So, I think that it's not a good idea​,​"​  ​

​  ​The White House later Monday released a memo from the president's physician saying the two discussed the use of hydroxychloroquine and determined "the potential benefit from treatment outweighed the relative risks."
​  "In consultation with our inter-agency partners and subject matter experts around the country, I continue to monitor the myriad studies investigating potential COVID-19 therapies, and I anticipate employing the same shared medical decision making based on the evidence at hand in the future," presidential physician Sean Conley wrote.
According to the results of his medical exam released last year, Trump, 73, qualifies as obese with a listed height of 6 feet, 3 inches and a weight of 243 pounds.
https://thehill.com/homenews/house/498435-pelosi-says-that-trump-taking-hydroxychloroquine-is-not-a-good-idea

This man and his wife could have benefited from quick testing and early treatment.
​  ​A Florida man who said he initially thought the coronavirus pandemic was “a fake crisis” has issued a stark warning for others and both he and his wife contracted the virus and landed in the hospital, where his wife remains sedated on a ventilator.

​Understanding Better​
Posted by John Day at 11:06 AM