The "Political Economy" is our human life-support ecosystem within the larger life support system of global life.
The political economy is based on the harness of one way flows from higher to lower energy and order, like burning oil and coal, to power further extraction of fuel and ore from this fair planet. This particular iteration of political economy is the most successful ever and is eating up all the good stuff, which is now terminally depleted, while it fouls air and water that life forms need to survive. This needs to be redirected without killing us all.
The directors are willing to sacrifice some of us, as they always do, but they are not willing to resign as directors, and give up their unique advantages as such.
It's an impasse. What would make them give up hope, capitulate, and let different people work out a different system that would not destroy all life, while supporting human lives?
Loss of the internet has come to mind, but that can never happen, right?

Yanis Varoufakis set out to write a chronicle of the decade of the 2020s, as if looking back.
He didn't get very far yet, but it's started.
​  ​By June 2020, as lockdowns began to ease, left-wing optimism that the pandemic would revive state power on behalf of the powerless remained, leading friends to fantasize about a renaissance of the commons and a capacious definition of public goods. Margaret Thatcher, I would remind them, left the British state larger, more powerful, and more concentrated than she had found it. An authoritarian state was necessary to support markets controlled by corporations and banks. Those in authority have never hesitated to harness massive government intervention to the preservation of oligarchic power. Why should a pandemic change that?

​From the "right" side of the aisle, it's not really a different view, just different focal points.
​  Rubino explains, “Sooner or later you’ve got to pay your bills, and if you don’t have anybody paying your bills to you, then you go bankrupt. Commercial real estate could just be a blood bath, which take us back to all the bailouts. You can’t let a big sector go bust in this world because suddenly everything is too big to fail. There is not a major sector out there that can be allowed to go bust. Not the airlines, not commercial real estate, certainly not the banks, you name it and it has to be bailed out. That’s where the really crazy stuff starts. When people figure out we are basically bailing out everybody from home owners to student loan holders, to car loan holders and right down the line, and then we get state and local governments with this gigantic multi-trillion dollar problem . . . and the amount of debt is off the charts to bail all of these guys out, that is when the real fun starts.”
How long will the bailouts go on? Rubino says, “We are heading into a Presidential election, which means we cannot let anything major fail. If you are the Trump Administration and Congress, you can’t let something big fail because it’s a crisis right before you need to get re-elected. So, you’ve got to bail people out. That’s what California, Illinois and Chicago, New York, Kentucky and all the bankrupt and badly run states have been hoping for all along. They have been hoping there would be a big crisis that would bail them out of their horrendous mismanagement of the past 20 or 30 years. There was no way that Illinois was not going to go bankrupt in normal times . . . or Chicago. . . . Now, they can go to the federal government and say we need a trillion dollars right now or we are going to lay off all the cops and all the teachers, and they think they have a pretty good chance of getting the bailout because the alternative is poison for the people running for office . . . . If you are the Trump Administration or Congress, I don’t see how you stop bailing people out before the election.”
https://usawatchdog.com/suddenly-everything-is-too-big-to-fail-john-rubino/

Across the pond, Brexit talks are back from COVID lockdown, but no different, as the UK now plays hardball with a tremendously weakened EU that really needs the British contribution to the budget.
Time is getting short, too. What will the Eurocrats give up for the funding they must have?
https://sputniknews.com/europe/202005271079435457-french-foreign-minister-jean-yves-le-drian-says-resumed-brexit-talks-are-going-badly/

Here is the story that the DNC are afraid of a V-shaped recovery that will re-elect Trump.
(I think they should be more afraid of Joe Biden, and they probably have no real intention of running him.)
https://www.politico.com/news/2020/05/26/2020-election-democrats-281470

India is using hydroxychloroquine prophylaxis for medical personnel. This is not the use that The Lancet looked at, giving it to sick hospital patients, already compromised by a disease that causes multi-organ failure, strokes and heart attacks.
The data is good for it's efficacy in prophylaxis. India has done a very large prospective study. That is how President Donald is using it, and he has been professionally advised in that course.
Coronavirus: India invites scepticism as it sticks by hydroxychloroquine, Covid treatment backed by Trump

Meanwhile, The Lancet "study", claiming more cardiac deaths with hydroxychloroquine in hospitalized patients, can't show where it got it's numbers, who the contributing doctors were, and can't explain why nobody heard of the company that did the study, including the Australian hospitals, whose data it claims to use, but which does not match.
https://www.theguardian.com/science/2020/may/28/questions-raised-over-hydroxychloroquine-study-which-caused-who-to-halt-trials-for-covid-19

Everybody has a predictive model of how the novel-coronavirus is going to spread, sicken and kill people. It's almost as if political interests can go to a model-store and pick the model which supports the actions that their backers want to happen. This model says that the COVID is well on it's way to saturating the UK population, so it's ok to just head back to the pubs and so on. Reminds me of Dirty Harry, "You've got to ask yourself, do I feel lucky, well, Do ya?"
https://www.belfasttelegraph.co.uk/news/uk/leading-scientist-urges-faster-exit-from-uks-lockdown-39225900.html

See how much virus shows up in the sewers. If you have the right kind of testing, this could be a pretty good real time measure of viral load in a city, and could guide the herd on it's way to herd immunity, without an excess of excess deaths. It's bound to get plenty of funding.
https://www.statnews.com/2020/05/28/wastewater-testing-gains-support-as-covid19-early-warning/

The US has a special trade relationship with Hong Kong, dating back to it being a UK colony. The State Department is declaring that Hong Kong is no longer "autonomous", leaving the White House with a very wide spectrum of trade war weapons to use against China. It's lot's of ammo for deal-making Donald. China really is cracking down on Hong Kong.
https://www.scmp.com/news/china/article/3086424/explainer-what-expect-now-us-deems-hong-kong-no-longer-autonomous

Taiwan, which really IS independant of China, unless it gets invaded, lays out specific programs to welcome (well to do) Hong Kong residents and business to Taiwan as they flee Communist oppression. Good for business..
.https://www.scmp.com/news/hong-kong/politics/article/3086374/taiwan-will-help-fleeing-hongkongers-move-island-tsai-ing

Nobody is talking about the death of the Chinese ambassador to Israel, of "natural causes", right after Mike Pompeo visited there to put a stop to Israeli big deals with China for 5g, Port of Haifa, and desalination plant project.
The desalination contract has gone to an Israeli company. What about those 2 bigger issues?
https://ahtribune.com/world/north-africa-south-west-asia/palestine/4192-herzliya-chinese-ambassador-du-wei.html

Russia is being very careful about Americans in and around Syria, like they don't trust us.
​  ​Asked why the American public should tolerate US involvement in Syria, Special Envoy James Jeffrey points out the small US footprint in the fight against ISIS. "This isn't Afghanistan. This isn't Vietnam. This isn't a quagmire. My job is to make it a quagmire for the Russians."

Yoakum avocado orchard and workshop projects pictured below with blogger 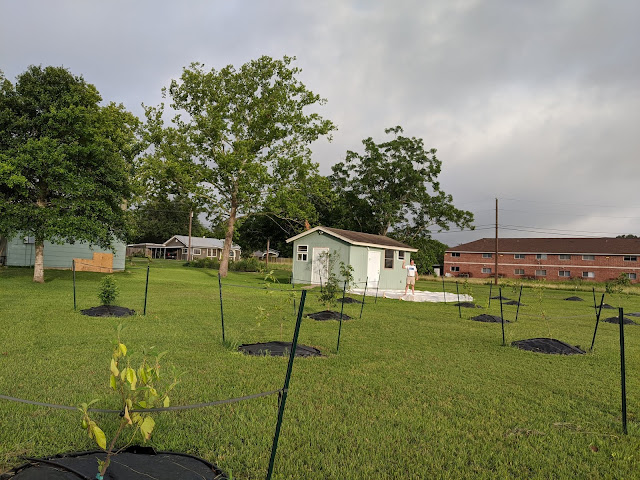