The conclusion is obvious. The details are important to understand our human context.
​ ​In terms of population numbers, few species can compare to the success of humans. Though much attention on population size focuses on the past 200 years, humans were incredibly successful even before the industrial revolution, populating all of the world's environments with more than a billion people. Kramer uses her research on Maya agriculturalists of Mexico's Yucatan Peninsula and the Savanna Pumé hunter-gatherers of Venezuela to illustrate how cooperative childrearing increases the number of children that mothers can successfully raise and—in environments where beneficial—even speed up maturation and childbearing. Kramer argues that intergenerational cooperation, meaning that adults help support children, but children also share food and many other resources with their parents and other siblings, is at the center of humans' demographic success. "Together our diet and life history, coupled with an ability to cooperate, made us really good at getting food on the table, reproducing, and surviving," Kramer writes.
​ ​During her time with the Maya, Kramer constructed a demographic model that considered how much household members consume, as the family grows and matures across a mother's reproductive career, balanced against how much a mother, father, and their children contribute. She found that Maya children contributed a substantial amount of work to the family's survival, with those aged 7-14 spending on average 2 to 5 hours working each day, and children aged 15-18 spending as much as their parents, about 6.5 hours a day. Labor type varied, with younger children doing much of the childcare, older children and fathers fill in much of the day-today cost of growing and processing food and running the household. "If mothers and juveniles did not cooperate, mothers could support far fewer children over their reproductive careers," Kramer writes. "It is the strength of intergenerational cooperation that allows parents to raise more children than they would otherwise be able to on their efforts alone."
https://phys.org/news/2019-11-human-population-ability-cooperate.html

I’m Watching My Students Become Soldiers in Our Endless Wars
At West Point, Graduation Day felt more like a tragedy than a triumph.
My greatest fear, I said, was that their budding young lives might closely track my own journey of disillusionment, emotional trauma, divorce, and moral injury. The thought that they would soon serve in the same pointless, horrifying wars, I told them, made me “want to puke in a trash bin.” The clock struck 1600 (4 pm), class time was up, yet not a single one of those stunned cadets—unsure undoubtedly of what to make of a superior officer’s streaming tears—moved for the door. I assured them that it was okay to leave, hugged each of them as they finally exited, and soon found myself disconcertingly alone. So I erased my chalkboards and also left.
https://www.thenation.com/article/afghanistan-army-west-point/

​"It can't happen here"...​
​ ​Where did all the time go? Thirty years ago this week the Berlin Wall fell. Then Soviet chairman Mikhail Gorbachev freed the Baltic states and allowed divided Germany to reunite. It was a geopolitical earthquake of historic proportions – and a major miracle of our times.
​ ​The once mighty Soviet Union had become exhausted by its long military/economic/political struggle to keep up with the much wealthier United States and its rich allies. Moscow had 40,000 tanks, but its economic infrastructure, crippled by Marxist ideology, was an empty shell.
​ ​A senior KGB general in Moscow told me that, a decade earlier, the renowned Soviet physicist Andrei Sakharov had warned the Politburo that failure by Soviet industry to account for deprecation to modernize and replace outdated equipment would provoke a major crisis by 1990. This is exactly what happened.
​ ​By 1990, Soviet industry was broken down, outdated or rusted away. The Kremlin could no longer maintain the Soviet welfare state with its free medicine and education, long holidays, vacation spas, early pensions and unaffordable military spending. Arms alone may have accounted for over 40% of Moscow’s budget.

​America's Gorbachev?
​International Man: Last year, President Trump took the unusual step of bypassing his advisors to announce his intention to withdraw all US troops from Syria quickly. The decision rattled Washington and the mainstream media. It caused former Defense Secretary Mattis to resign. Almost a year later, the US has withdrawn only a token number of soldiers. It still has thousands of troops occupying the part of the country where oil fields are located. What is going on here?
David Stockman: Well, that’s the Deep State at work.
Donald Trump is all by his lonesome. He’s home alone in the Oval Office. Now, half of it, he can blame himself. If he hires someone, a known idiot like John Bolton, what does he expect is going to happen except that everything he wanted to do is going to be undermined...
​ ​When you have a regime change policy—and this was the one real positive thing Trump brought to the table. He said regime change has failed; we’re not going to do it under my policy.
​ ​Why do you think the North Koreans are quasi-starving? And I know the Communist elite and Kim’s family and so forth live a pretty fat life, but nevertheless they’re in dire straits economically.
​ ​Why do they invest all this money in developing nuclear capability and missile capability? Because they don’t want to be regime changed. Kim is a young man, he’s in his mid-30s, and he doesn’t want to be another Muammar Gaddafi or Saddam Hussein.​..
...I think the stock market is in its last days of bubble excess. I think the economy is slouching toward recession within a matter of a few quarters or months. If that happens, Trump is toast. Elizabeth Warren becomes president, and then that’ll be a whole new ball game that is hard to figure.​..
...Foreign policy has been totally taken over by the Democratic paranoia about Russia and Putin and meddling in our elections.
​ ​Now it’s extended to the whole impeachment inquiry and Ukraine-gate. That’s what the whole debate is going to be about. The debate is going to be about a sideshow.​..
​ ...​It’s not even mentioned because, as I say, the Warfare State machinery essentially squelches any kind of debate, suffocates any kind of thought that at all deviates from the status quo.
​ ​The big issue in the world today is war and peace, and we’re facing a campaign in 2020 where it won’t even be mentioned.
https://internationalman.com/articles/david-stockman-on-how-the-deep-state-really-works/

A United Nations expert in torture diagnosis has in the past week issued a stark warning that Australian whistleblower Julian Assange is in danger of dying from extreme prison conditions in Britain.
It is testimony to the rank hypocrisy of British and American governments who lecture others around the world about democracy, human rights and international law...
The appalling assessment corroborates what Assange’s father told Strategic Culture Foundation in an interview published on September 24. John Shipton warned then that he feared his son was being killed extrajudicially by the British and American authorities.
Despite Assange’s award-winning journalism and truth-telling, the Western mainstream media have shown utter disregard for his plight. Indeed, such media have tended to bolster the vilification and character assassination piled on Assange by the American and British governments. https://www.strategic-culture.org/news/2019/11/08/un-envoys-grim-warning-over-assanges-life/

S​peech becomes less and less and less "free".
Mostly, speech disappears if it is not the-right-stuff, within the shrinking  "Overton Window".
"This judgment has major implications for online freedom of expression around the world.... The ruling also means that a court in one EU member state will be able to order the removal of social media posts in other countries, even if they are not considered unlawful there.
https://www.gatestoneinstitute.org/15139/european-court-free-speech

Looking at avocado seedlings with Tyler this morning 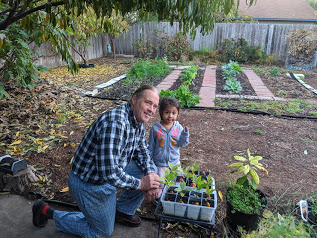