The novel-coronavirus seems to have been present in the US and in Europe before it was discovered in Wuhan last December.
https://www.rt.com/op-ed/500502-worldwide-covid19-spreading-december/

It could well have come from Wuhan, or just as easily from Ft Detrick, Maryland, or other national bioweapons labs. (explored here)
https://www.johndayblog.com/2020/04/waves-bye-bye.html

This headline says that the engineering of the SARS-CoV-2 virus, proved in this paper by a Chinese scientist, hiding out in the US, means that it came from the Wuhan lab. Nothing in there is specific to that lab at all. We now know that the virus was already present in numerous other countries, including the US, before it was found infecting people in Wuhan, last December.
https://www.zerohedge.com/medical/rogue-chinese-virologist-joins-twitter-publishes-evidence-covid-19-created-lab
The patterns are that 90% of infections are not represented by test results, meaning they are mildly symptomatic or asymptomatic, and we know that those predominate in younger people without comorbidities such as diabetes, hypertension and obesity.
Populations have been getting sampled in various ways, like blood donors, and some rural free-testing weekend events, but the results are mostly not revealed.
College football is big in the US, and bigger in Texas. UT, Austin had its first football game of the season, hosting under 15% of stadium capacity. They required UT students to be tested for COVID, before being issued a ticket. Almost 1200 UT students submitted to testing, and about 9.5% tested positive.
https://www.texastribune.org/2020/09/13/university-texas-coronavirus-college-football-longhorns/
I presume the football-fans tested had little to no symptoms. Many students are “attending” remotely this fall, but this is a high rate of positives in those attending in person.
We sort of know that the virus has been infecting the 18-39 year old group in the southwest US this summer. This is kind of a slice of that. All the students who got over it, already, would not show positive, especially if a rapid antigen-test was used.
Dr.B. a friend at the UT Student Health Center says the “rapid test” was probably used, since it is being used across campus lately. Students who test (+) go to Student Health for PCR confirmation.
9.5% positive should be a lowball estimate, if anything.
What are the implications of almost 10% of a sample of college students in Austin Texas having the novel coronavirus on one particular day, when they didn’t really feel sick?
My mind is going down a lot of rat-mazes with that question.
In Austin, we have seen a tiny, tiny dribble of positive tests over the past 6 weeks or so. Testing fell off, and the percent positive rate on tests in Austin continues to fall, though it’s a little over 8% for Texas as a whole. There is lots of mask-wearing and compliance in Austin, especially among the educated working class here.
https://apps.texastribune.org/features/2020/texas-coronavirus-cases-map/?_ga=2.60261288.464069447.1600084852-1037324414.1591643250
Most of these students don’t come from Austin. They are probably fairly representative of Texas and smarter than average.
They want to attend a college football game in person (something I never did, or felt like doing at UT)
They might be a little more extraverted than average, but college football is completely normal here.
Did they get more sun, more vitamin-D this summer? I suspect they were average in sun exposure.
About 9.5% of Texas college students, from all across the state, in a sample of about 1200, at the start of the fall semester tested positive for novel coronavirus on one day.
I’ll take that as roughly representative of young adults across Texas last week.
I’m just going to say that I think the virus has pervaded Texas, if that sample is anywhere close to representative, and I don’t see how it can be far off.
Sure, there are people who have not yet been exposed, but I think this means that most people are getting exposed at some level every week, if not most days.
Texas may just continue to see a tapering of positive test results, hospital admissions and deaths, going towards Halloween. If this is the case, then almost nobody will be scared of the “No-mask-costume”.
https://apps.texastribune.org/features/2020/texas-coronavirus-cases-map/?_ga=2.60261288.464069447.1600084852-1037324414.1591643250
I’m not changing anything I am doing. I’m masking in public buildings, wearing PPE at the clinic, and taking 5000 units of vitamin-D daily. I’m just watching this with a whole lot of interest.
Dr Fauci says it’s going to be a long, tough winter of holing-up in self-quarantine.
Does he think so? Is he just telling us that? Is that the plan for us to follow? Who benefits? Who suffers?

What’re you going to dress-up-as this Halloween?

Before pandemic, feds funded human coronavirus experiments in 2019 in China
NIH has been "major funder" of SARS research at Chinese laboratory in Wuhan, according to State Department memo.
https://justthenews.com/politics-policy/coronavirus/records-suggest-feds-may-have-funded-enhanced-infectiousness

W​ho thinks it's a good idea for Americans to pay so much more for prescription drugs than anybody else in the world?
Do any of y'all vote much? Do ya think you would like that expense lowered in your budget?
Trump signs new, expanded executive order to lower U.S. drug prices
​https://www.reuters.com/article/us-usa-trump-pharmaceuticals/trump-signs-new-expanded-executive-order-to-lower-u-s-drug-prices-idUSKBN2640V0?il=0

​Disclaimer: I'm write-in voting for Tulsi Gabbard for President in November.
Paul Craig Roberts believes the plotters of a coup in the US have a lot to lose if it fails. They are under personal threat if it fails.
​  ​As a number of carefully researched and documented books, some written by insiders, have proved conclusively, the CIA has controlled the prestige American media since 1950.  The American media does not provide news.  It provides the Deep State’s explanations of events.  This ensures that real news does not interfere with the agenda.
​  ​The German journal​i​st, Udo Ulfkotte, wrote a book, Bought Journalism, in which he showed that the CIA also controls the European press.
​  ​To be clear, there are two CIA organizations.  One is an agency that monitors world events and endeavors to provide more or less accurate information to policymakers.  The other is a covert operations agency. This agency assassinates people, including an American president, and overthrows uncooperative governments.  President Truman publicly stated after he was out of office that he made a serious mistake in permitting the covert operations branch of the CIA.  He said that it was an unaccountable government in inself.
​  ​President Eisehnower agreed and in his last address to the American people warned of the growing unaccountable power of the military/security complex.
​  ​President Kennedy realized the threat and said he was going “to break the CIA into a thousand pieces,” but they killed him first.
https://www.paulcraigroberts.org/2020/09/10/the-united-states-its-constitution-have-two-months-left/

​Eleni sends this article from a Greek author, saying that globalist powers can no longer fight overt wars of conquest, but need to destabilize their opponents with color revolutions, and by setting them at war with each other. This has been the globalist  and US tactic for a couple of decades, but especially since  2010. (Is it being put into play in the US. Looks familiar!)
​Maidan, Navalny, Kastellorizo: The Chaos Strategy
​  ​Twenty years ago, I was covering the Munich Security Forum as a journalist and I took an interview from Brent Scawcroft, National Security Adviser for President Bush (the father). I believe he was one of the men who played a huge role in pushing Boris Yeltsin to the crisis which culminated into the bombing of the Russian parliament in October 1993, thus opening the way to the biggest looting in the history of mankind, the so-called Russian privatisations. I asked Scawcroft what the US policy towards Russia and China should be . He answered: “We need to have better relations with Moscow and Beijing, than they can have between themselves”.
​  ​The way for the Empire to dominate in the Eastern Mediterranean, imposing its pax or pushing for war, is by having better relations with Athens and Ankara than they can have between themselves. Now they don’t have any at all.
http://www.defenddemocracy.press/maidan-navalny-kastellorizo-the-chaos-strategy/

Today’s Energy Predicament – A Look at Some Charts​, Gail Tverberg​  (Gail is always spot-on when she explains the workings of fossil-fuels and economy as one interwoven system that acts differently than what we expect,​ Good graphs, too.​)

​Is plastic recycling a lie pushed by big oil and refining to get us all to keep buying throw-away plastic without feeling guilty?
(Everything was OK until China quit accepting the boatloads of plastic from the US "for recycling", which it never did do or could do.)
https://www.npr.org/2020/09/11/897692090/how-big-oil-misled-the-public-into-believing-plastic-would-be-recycled

How much money is "just right" to permit optimum "happiness" before more money starts making stress worse again?
(I wish they would note that it's not just the amount of money that leads to satisfaction, but the kinds of work that give industrious people that size-range of paychecks. Jenny and I seem to be in the optimum range. We work hard and do our best, and work way over what is contracted, because we believe in what we are doing for people.)
https://www.usatoday.com/story/money/nation-now/2018/02/26/does-money-equal-happiness-does-until-you-earn-much/374119002/

Will wonders never cease?
Physicist: The Entire Universe Might Be a Neural Network
https://futurism.com/physicist-entire-universe-neural-network 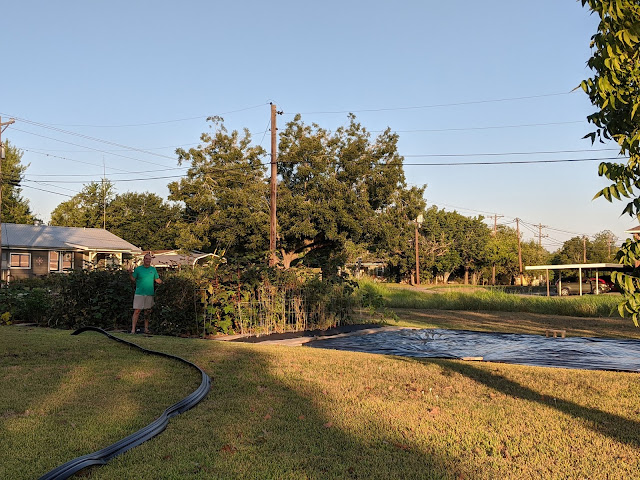