The Age Of Extermination

​  ​"Now I think I can propose the answer​"​:
The most likely target for the next extermination round are middle-class retirees.
​  ​Retirees satisfy all the requirements: They are identifiable, of course, they are old! They are often relatively wealthy and, more than that, they cost a lot of money in terms of health care. Finally, they can hardly put up serious military resistance. Exterminating the middle-class elders would be both easy and profitable​...

In practice, the weak spot of the middle-class retirees is that they need medical assistance and that they cannot normally pay the skyrocketing costs on their personal saving. So, they could be gently removed from the state budget by degrading the public health care system while saying that it is being modified in order to protect them...

....society as a whole is a complex network with a certain ability to process information. It does that without being "conscious" of what is being done: there is no plan, no specific objectives to reach. But often society moves as a whole in a specific direction.

​  ​In this case, Western Society seems to perceive the problem created by an excess of elderly people, and it is moving to solve it. It is brutal, yes, but only individuals have moral restraints, society as a whole has none. Every decision taken individually affects all the other decisions, and we are seeing the results. It is nothing new in history where, typically, everything that happens, happens because it had to happen.
https://thesenecaeffect.blogspot.com/2021/10/the-age-of-exterminations-iii-you.html
​Involuntarily Idled
(pictured with flourishing Namwah and Orinoco banana plants and blackeyed peas) 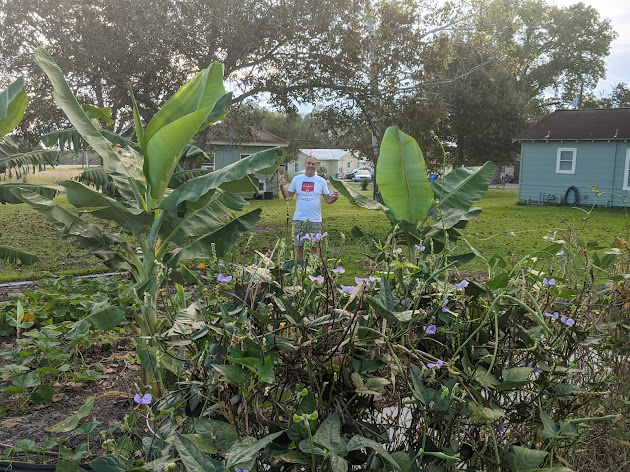