​  A friend, ​Phoenixvoice quoted Hannah Arendt​, who she has been reading, trying to comprehend totalitarianism.​
​  ​“Under conditions of total terror not even fear can any longer serve as an advisor of how to behave, because terror chooses its victims without reference to individual actions or thoughts, exclusively in accordance with the objective necessity of the natural or historical process.
​    ​[​Arendt​ has just spent the last few paragraphs talking about how totalitarianism follows a “natural” or “historical” process.]
Under totalitarian conditions, fear probably is more widespread than ever before; but fear has lost its practical usefulness when actions guided by it can no longer help to avoid the dangers man fears. The same is true for sympathy or support of the regime; for total terror not only selects it victims according to objective standards; it chooses its executioners with as complete a disregard as possible for the candidate’s convictions and sympathies.”
​  I​​t seems that Hannah Arendt is saying that totalitarianism is a different ​human-group paradigm, where everybody does as they are told, including killing other people,​unquestioningly, feeling the fear and stress and turning off their inner moral guidance, the voice of god and conscience.​ ​("Well, we are at war.")​

​  ​If we take this as an alternate human-setting, and we look at history, we can see that this setting was active in wartimes, and those times that we always had a hard time understanding how people could do all those horrific and crazy things.

​  ​People who have drunk of the excitement of mass team sports might understand the rioting of fans afterwards, and might get a feeling for massed battles of crowds, and lynch mobs.

​  ​Maybe we have to understand the mindset within totalitarian times as being something humanly useful for those kinds of times. It leads to mass killing of humans, which seems to be “the objective necessity of the natural or historical process”.

​  ​Perhaps that is the function of this setting in humans, to reduce the population at times until it is completed. Who/what decides? Must there be a human Fuhrer?

​  ​“Science” the faceless god seems to be cast in that role this time, mostly for people who don’t understand scientific method, or who see it as secondary to power.

​  ​I have never been wired to feast on crowd-energy. I am a scientist, and it comes naturally to me, and I do not crave power, but like camaraderie and friendship.

​  ​I was recently criticized for using “zetigeist” to mean a living ​conscious and intentional ​form in the collective mind, rather than a stylistic epoch or wave tied to a time.

​  ​I don’t really have another word for that. It seems to me that mass-consciousness is not necessarily blind, can be ruthlessly destructive or powerfully good and beneficent. People can answer calls to righteousness​,​ and ​also ​to killing their very neighbors. It keeps happening.
They said that in Rwanda it was not really Hutu and Tutsis​ killing each other​, but people whose kids went to school barefoot killing people whose children wore shoes to school.

​  ​I’m ​postulating​ that we, as a species, seem to have factory settings that kick in at critical times, which are completely invisible at other times, repeatedly apparent in history, and ​subsequently misunderstood and misrepresented to students and citizens who come later.

​  ​Sociopaths ​might thrive​ in these phases, feel right at home, but ​sociopaths ​also get culled.
​I speculate that w​e may have ​such "wartime"​ settings because we do not have natural predators other than sociopaths, and there must be some mechanism to reduce our numbers when we outgrow our environmental support system.

​  ​It may be that people who resonate to these wavelengths are more susceptible to the killing and being killed, though it can obviously reach out and touch anybody.

​  ​I feel that I have different settings​. I​ have felt for my whole life that I would need to make it through a time like this​. I felt ​that I needed to learn from my Grandfather who ​was in both world wars and raised a family in the Great Depression. I felt that I​ needed to really understand…

​  ​If we are dividing into human groups with different settings for times of “selection events” or “herd culling” or “world war”, then maybe we need to reconsider history this way. The herd splits into clumps that behave differently, in synchrony, like a murmur of Starlings, and some members of the herd split away, maybe ​to ​congregate elsewhere in smaller groups.

​  ​​People now are so broadly unable to employ their rational processes for simple​ ​preservation​ of themselves and their families​ lately.
We seem to be living in different worlds, and going forward into different worlds.
I don’t feel like I can try to convince anybody who is living in that other world where COVID vaccines are good, protect you, protect the children, and​  "​everybody needs to trust Dr. Fauci and get behind the science”.
​BRICS is turning into a collective "Non West"   (Lots to consider here)
..For various reasons, both Iran and Argentina are extremely interested in BRICS projects to create new international settlement systems that are alternative to the global hegemony of the dollar. Iran, which is under sanctions, life itself has forced to go to “de-dollarization”, the country practically does not use the US currency. For Argentina, the transition to a hypothetical new monetary and financial zone would mean an escape from the stranglehold of the IMF, from the pressure of American creditors, which today have an extremely destructive impact on the national economy.
​  ​In any case, against the background of aggressive pressure from the United States and its allies on potential new BRICS members, the desire of Iran and Argentina to join the community requires a certain amount of foreign policy courage...
https://thesaker.is/brics-is-turning-into-a-collective-non-west/
​I am having a very hard time finding more on this story from 7/1/22.
Commission to Allow Russia to Resume Transports to Kaliningrad
The European Commission plans to issue a clarification that will allow Russia to resume sending supplies to the exclave of Kaliningrad via Lithuania. Berlin supports the idea, but some in Vilnius are not pleased.
https://www.spiegel.de/international/europe/eu-sanctions-commission-to-allow-russia-to-resume-transports-to-kaliningrad-a-8c779e97-56cb-4dd4-84bd-e3f70de541b2
Germany seizes Russian LNG tankers​   (Russians are not commenting, seeking to negotiate again, I suspect, avoiding ​provocations​ when possible.)
​Germany has assumed control of three liquefied natural gas (LNG) carriers that belong to Russian energy major Gazprom, Britain’s Telegraph newspaper reported on Thursday citing maritime operator Dynagas LNG.​..
..Gazprom Germania, which used to operate some of Germany’s largest natural gas storage facilities, was taken over by Berlin several weeks ago as part of Ukraine-related sanctions on Russia. In response, Gazprom stopped supplying gas to the company, which resulted in liquidity problems and jeopardized the work of key gas retailers in Germany and the UK.
https://www.rt.com/business/558116-germany-seizes-russian-lng-tankers/
​  Erdogan never rolls-over-and-plays-dead.
Erdogan Says Sweden, Finland NATO Bids Could Still Be Blocked If Vows Not Kept
“First Sweden and Finland must fulfill their duties and those are already in the text … But if they don’t fulfill these, then of course there is no way we would send it to our parliament,” he added.
What appears to be the most important issue for Erdogan is that Finland and Sweden agree to extradite suspected PKK members. He claimed Sweden agreed to extradite 73 people, although a leaked version of the memorandum did not say that. “Sweden promised to give us these 73 people with this text. They may or they may not, we will follow that through the text and we will make our decision.” ...
(This looks different from what Erdogan thinks was said.)
​..​Concerning extradition, the memorandum said that Sweden and Finland agreed to address Turkey’s “pending deportation or extradition requests expeditiously and thoroughly.” The Nordic nations also agreed to “establish necessary bilateral legal frameworks to facilitate extradition and security cooperation with Turkey.”
https://news.antiwar.com/2022/06/30/erdogan-says-sweden-finland-nato-bids-could-still-be-blocked-if-vows-not-kept/
Biden Says Turkey Will Get New F-16 Jets, Claims "No Quid Pro Quo" With Erdogan
https://www.zerohedge.com/geopolitical/biden-says-turkey-will-get-its-f-16-jets-claims-no-quid-pro-quo-erdogan
Donetsk and Luhansk Republics are the likely source of this grain impounded by Turkey for inspection. "Stealing grain from Ukraine" is the charge. It's definitional.
Turkey detains Russian-flagged vessel carrying grain
..Ukraine then asked Turkey to “conduct an inspection of this sea vessel, seize samples of grain for forensic examination” to determine its origin, and expressed its readiness to launch a joint investigation with the Turkish authorities.​
​(It should be easy to ​read​ the little "made in" stamp on each grain with a microscope, right?)
https://www.rt.com/russia/558298-ukrainian-grain-ship-detained/
​  Spartacus presents a long and detailed case thatCOVID-19 gene-therapy "vaccines" are a bioweapon, just as the lab virus is, but with longer-term implications.​
(Summary)  From all these assembled facts, we have put together a hypothesis. There is a global conspiracy by Neo-Malthusians to cull the world's population with a lethal amyloidogenic and autoimmune-reaction-inducing toxin mischaracterized as a vaccine. To pacify the survivors, who would otherwise be horrified at the genocide of their neighbors, this is accompanied by another, directly related and concurrent plot to mind-control millions or billions of human beings worldwide, with advanced in-body surveillance and brain manipulation technology developed at DARPA-affiliated laboratories and elsewhere.
This was to be accomplished by engineering a pandemic pathogen, creating a climate of terror around it using psychological warfare and psychological torture techniques, and then despotically mandating yearly or bi-yearly vaccinations for it, incorporating whatever formulations of new culling, tracking and manipulation technology the conspirators wished. This was to be incorporated into existing Internet of Things networks as a form of “Smart Grid” for monitoring all human activity in cities, worldwide, altering human behavior, and manipulating public opinion and rendering existing political systems utterly moot, as part of an overall initiative towards engineering “Smart Cities”.
https://iceni.substack.com/p/spartacast-01#details
There are multiple edible faux-human-flesh meat-products popping up. What is the point? Who funds these projects? Who are the expert taste-testers?
This one is ideal for "cannibalism-curious" vegans.
Burger 'that tastes like human flesh' despite being vegan wins top award
If you've ever hankered after the taste of human flesh, now you can sample it in the form of an all-new plant-based burger that claims to perfectly replicate the taste and texture of human meat
https://www.mirror.co.uk/news/weird-news/burger-that-tastes-like-human-27347170.amp
Traditional Vegetarian (took this picture of Jenny with the banana plants) 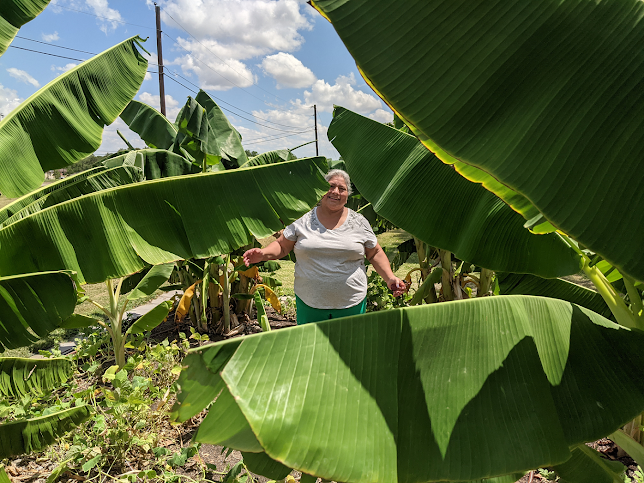