​  ​The management style of our ‘owners” (George Carlin ref.) is to preemptively stage a crisis ahead of any crisis they cannot forestall.
​That allows them to manage the societal-control-narrative going into the crisis, whatever it may be.​
​  The primary crisis is that global real economy stopped growing after summer 2018, and was contracting despite financial stimulus after that,
leading to the "repo-crisis of August-September 2019, when the biggest banks  in the world could not trust each other overnight with T-bills as collateral. ​
That indicated that they knew a "Lehman moment" was at hand. The Fed papered over that by taking over the repo-window, providing trillions of dollars in overnight liquidity.
Then they played the "pandemic emergency" card, and mysterious $US trillions went directly into the reserves of the biggest banks and financial institutions, like Blackrock,
which got mysterious government super-powers, which we don't understand yet. Still, that was kicking the can down the road,
because economic growth has fallen-and-can't-get-up. The system implodes. It's based on exponential growth.
It has been supported by lies for 14 years already.
The​-owners​ are ​now ​playing with fire with the “War” card, but it is a card they know well, and it can serve any need at any time, but the ante keeps rising…
Europe is the ​current​ crisis-center​, but the problem has worsened faster than anticipated. The Russian economy didn't tank.
Russia appears to have gotten stronger by many measures.
Russia has also been irritatingly reasonable, refusing to take all kinds of bait, continuing to offer oil and gas to Europeans.​
​  ​It seems that the Ukraine-War crisis perception is dropping below that of economic-collapse and freezing to death​.
If Russia had just gotten sick from the Ukraine-war bait, as was planned, things would be better. there would be hope for Globo-Cap to swallow Russian resources
The failure of the Ruble would have paved the way for central bank digital currency to be coupled with electronic health-passports,
and the European Central Bank could have sailed over the debris of the crumbling western financial order by leapfrogging it.
That is not possible now. That rotting and wobbly order must be kept upright as long as possible.
The BRICS Banking and international-trade mechanisms are up and toddling already.​
If we assume that economic collapse (at least financial-collapse) is baked in, then ​the ​crisis level must escalate to meet it.​
A high crisis level is necessary to justify whatever actions the-owners and bankers decide they need to take to maintain their power over western-societies,
especially their freedom to act without restraint, however they see fit.​
Russia was goaded to invade Ukraine by Ukrainian troop preparations to invade the Donbas region in February. Russia invaded to preempt that.
What next?

​  ​That’s a tough question, because Europe can’t fight Russia. They just can’t do it. They are out of men and material.
The Ukrainian army was built up for this war since 2014, and it is played-out. Nobody else has tanks and artillery left.
Military aircraft await repairs. Factories take years to fill orders for military equipment…
​  ​How about fighting China? Maybe “fighting” China would be even better…
A “war” of military posturing, threats and suspension of trade is possible.
Preparations are already underway, and numerous steps have been taken to stop transfer of critical products ​to China.​
The US military has purportedly moved all production of critical military chips out of Taiwan,
and is setting up the Taiwanese chip factories for demolition by factory teams, in event of ​Chinese ​invasion.
​  This will break global supply chains before any country is ready, but it is such an opportune time to launch an attack against a foe,
that it can't really be missed, either.
Time is of the essence to maintain escalation initiative in this war against regular-people.​
Surplus Energy Economics notices what French (Rothschild-puppet) President Macron recently said about
"The end of the age of abundance". This arises from the cost of extracting energy resources like oil, coal and gas rising high enough
to suppress the rest of the economy, and create cycling recessions, as we got in 2007, and never really left.
https://surplusenergyeconomics.wordpress.com/2022/08/30/238-money-and-the-end-of-abundance/comment-page-1/#comment-31655
What Moon of Alabama (German) does not come out and say here is that European "leaders" must follow orders from their masters.
In Germany, that's the US/NATO. The US uses a lot of bribes and blackmail on European politicians.
Europe's Economic And Social Suicide - Provoked by The U.S. And Helped Along By Europe's Leaders
https://www.moonofalabama.org/2022/08/europes-economic-and-social-suicide-provoked-by-the-us-and-helped-along-by-europes-leaders.html#more
The long awaited Ukrainian counter-offensive happened yesterday, unreported by most.
​  ​The Armed Forces of Ukraine (AFU), while trying to conduct an offensive in Mykolaiv-Krivoy Rog and other directions,
suffered heavy losses, more than 1,200 soldiers were destroyed. This was reported to journalists by the Ministry of Defense of Russia.
​  ​According to the ministry, Russian troops destroyed 48 tanks, 46 infantry fighting vehicles, 37 other armored combat vehicles,
8 pickups with heavy machine guns.
http://thesaker.is/russian-mod-updates-the-losses-of-the-ukrainian-armed-forces-after-the-failure-of-their-counter-offensive/
​  It's time to try a new tack before the US military has no ammo left. Germany is already out.
Pentagon Stockpiles "Uncomfortably Low" Amid Ukraine Transfers, Officials Admit
https://www.zerohedge.com/military/pentagon-stockpiles-uncomfortably-low-amid-ukraine-transfers-officials-admit
Volodomyr Zelensky is about to become a tragic figure somehow. Winter approaches, Ukraine is just slowly losing,
and the west can't keep up supplies or appearances any more. The west has to take some kind of initiative, and it is likely to kill Zelensky'
Ground beneath Zelensky’s feet is shifting​ , ​Bhadrakumar, Indian Punchline
https://www.indianpunchline.com/ground-beneath-zelenskys-feet-is-shifting/
Exact dates for IAEA mission to 'targeted' nuclear site revealed ​
​Experts from the UN’s International Atomic Energy Agency (IAEA) will examine the Zaporozhye nuclear power plant between
August 31 and September 3, in an effort to assess the situation at the site amid fighting between Russian and Ukrainian forces.
https://www.rt.com/russia/561735-iaea-zaporozhye-nuclear-plant-ukraine/
​  Algeria, colonized by France, and treated disrespectfully ever since, can't increase gas exports much at all.
​President Emmanuel Macron Warns of Cold Winter in Europe. Natural Gas Supplies and France’s Relationship with Algeria
https://www.globalresearch.ca/president-emmanuel-macron-warns-cold-winter-europe/5791715
This is absolutely NOT the desired societal-control-narrative, yet it keeps getting out.
Exhaustive Study of German Mortality Data Finds Excess Deaths Tightly Correlated with Mass Vaccination
https://www.globalresearch.ca/exhaustive-study-german-mortality-data-finds-excess-deaths-tightly-correlated-mass-vaccination/5791727
No, No, No! They were supposed to keep that SECRET!
China Is Aggressively Reselling Russian Gas To Europe
https://www.zerohedge.com/markets/china-aggressively-reselling-russian-gas-europe
​  Very well connected investment analyst, and China expert, Kyle Bass, says in opening sound bite that
"the US DoD expects China to move on Taiwan in the next 1-2 years".​. This is like the rumor I hear, that
the US DoD has moved all Pentagon chipmaking out of Taiwan this month and is working with factories
to set up destruction-mechanisms, controlled demolitions.
China has been warned that this is suicidal, according to my rumor.
https://www.zerohedge.com/geopolitical/kyle-bass-china-will-invade-taiwan-next-1-2-years
Yes, Yes, Yes Japan has decided at the last minute to keep a stake in nearby Russian LNG project .
This has been a long-term investment in something which is in Japan's national interest, and not in US/NATO interests.
This may be a pivotal decision, and it may signal a US/NATO pivot-to-China (or not).
Japanese Firm Signs New LNG Deal With Russia’s Sakhalin-2
https://oilprice.com/Latest-Energy-News/World-News/Japanese-Firm-Signs-New-LNG-Deal-With-Russias-Sakhalin-2.html
​Nordstream-1 is shut down for 3-4 days for scheduled maintenance. Russia says it will start up again Saturday.
​https://oilprice.com/Latest-Energy-News/World-News/Russia-Officially-Halts-Natural-Gas-Flows-Via-Nord-Stream-1.html
This sounds completely crazy, right? Texas almost lost the whole grid in February 2021,
and now they are pitching cheap power to Bitcoin miners? The catch is, that the power gets shut off if the grid gets weak.
Texas gets the backup power for the grid by increasing total capacity, and "shedding" it away from the cheap seats sometimes.
​  ​Texas Crypto Miners Ask To Use As Much Power As All Of New York State
Texas officials have been urging crypto currency-miners to move their operations to the Lone Star State.
The campaign is working so well that applications for power hook-ups are piling up to a level far above what state
power authorities estimated just four months ago.
https://www.zerohedge.com/energy/texas-crypto-miners-ask-use-much-power-all-new-york-state
Worker Bee (pictured mowing most of an acre of thick wet grass this past weekend) 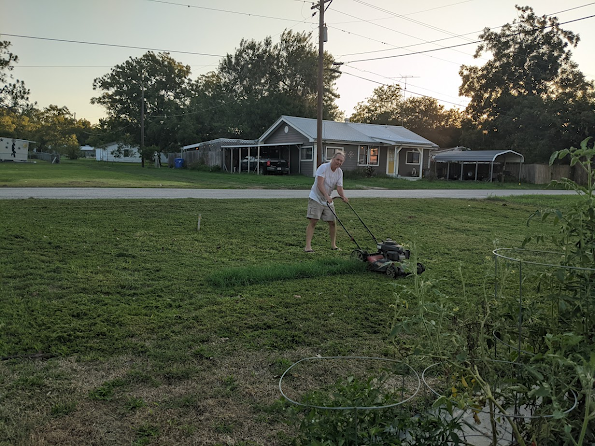