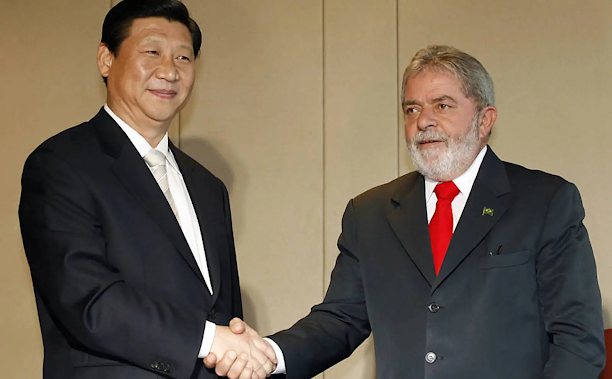 https://thesaker.is/comeback-kid-lula-in-the-eye-of-a-volcano/
THE DEPARTMENT OF HOMELAND SECURITY is quietly broadening its efforts to curb speech it considers dangerous, an investigation by The Intercept has found. Years of internal DHS memos, emails, and documents — obtained via leaks and an ongoing lawsuit, as well as public documents — illustrate an expansive effort by the agency to influence tech platforms.
​  ​“Platforms have got to get comfortable with gov’t. It’s really interesting how hesitant they remain,” Microsoft executive Matt Masterson, a former DHS official, texted Jen Easterly, a DHS director, in February.
​  ​In a March meeting, Laura Dehmlow, an FBI official, warned that the threat of subversive information on social media could undermine support for the U.S. government. Dehmlow, according to notes of the discussion attended by senior executives from Twitter and JPMorgan Chase, stressed that “we need a media infrastructure that is held accountable.”​    (er, "coerced"?)
https://theintercept.com/2022/10/31/social-media-disinformation-dhs/
​ ​The Japanese government decided to officially screw the sanctions, and remain involved in the (formerly Exxon-led) Sakhalin-1 oil and gas project in Russia, as it seeks a stable supply of energy (who doesn't) despite international sanctions on Moscow over its invasion of Ukraine, the Nikkei reported...
..ExxonMobil, which held a 30% stake in Sakhalin-1, announced in March that it would withdraw from the project. But after vacillating for more than half a year, Japan decided not to follow in Exxon's footsteps.
​  ​Meanwhile, Russia set up a new company to take over the project under a presidential decree that has in effect forced investors to choose sides. Japan's Ministry of Economy, Trade and Industry is a stakeholder in Tokyo-based Sakhalin Oil and Gas Development -- which owns 30% of Sakhalin-1's current operator - along with other investors including Itochu, Japan Petroleum Exploration and Marubeni...
​  ​As a result of the chaos, operations at Sakhalin-1 have been virtually shut down, and Japan has imported no oil originating from the project recently, so losing its stake will not have an immediate impact on the country's fuel supply.
​  ​Russia has transferred operations of the Sakhalin-2 natural gas project to a new company as well. Japanese investors Mitsui & Co. and Mitsubishi Corp. decided to retain their stakes in the project, and their continued investment has been approved by the Russian government.
​  ​Translation: the upcoming G-20 will be rather awkward as Japan's PM Fumio Kushida, an anchor pillar of the G7 in Asia, may decide to sit at the table next t​o​ Xi and Putin.
https://www.zerohedge.com/energy/anti-russian-alliance-fractures-after-japan-decides-stay-russias-sakhalin-1-energy-project
​  This may be a cover-story if some American soldiers have already been captured in Ukraine and need to be traded-out.
"A small number of U.S. military forces inside Ukraine have recently begun doing onsite inspections to ensure that Ukrainian troops are properly accounting for the Western-provided weapons they receive, a senior U.S. defense official told Pentagon reporters Monday​".​
https://www.zerohedge.com/geopolitical/pentagon-confirms-us-boots-ground-ukraine-close-front-lines
​  ​Ukraine “grossly violated” the Istanbul agreement on grain exports via the Black Sea and forced Moscow to suspend it indefinitely, Russia’s envoy to the UN Vassily Nebenzia told the Security Council on Monday. The Russian Navy will inspect all cargo ships bound for Ukraine, even those unilaterally cleared by the Turkish-based coordination center, he added.
​  ​“This subversive action of Kiev grossly violates the Istanbul agreements and, in fact, puts an end to their humanitarian dimension. It is now obvious to everyone that the Black Sea humanitarian corridor is being used by the Ukrainian side for military sabotage purposes,” Nebenzia said, referring to Saturday’s drone attack on Sevastopol.
​  ​Russia “cannot guarantee the safety of civilian ships participating in the Black Sea initiative,” Nebenzia added, as “we do not know what other terrorist attacks Kiev is preparing with the support of its Western sponsors.”
https://www.rt.com/russia/565686-un-grain-deal-dead/
​  ​The grain deal between Moscow and Kiev has not met its stated goals, Russian President Vladimir Putin said on Monday. Most of the Ukrainian agricultural products exported under the agreement have not reached the poorer nations they were supposedly intended for and have instead ended up in Europe and Türkiye, he argued.
​  ​Putin said Moscow was suspending its participation in the deal, but not fully withdrawing from it.
​  ​The deal was promoted to “secure the interests of the poorer nations,” he said, adding that, according to Russian intelligence, the real structure of Ukraine’s grain exports is vastly different.
​  ​“We agreed to that [grain deal] precisely in the interests of the poorer nations,” the Russian president said. “On the whole, it looks like 34% of [the Ukrainian] grain gets to Türkiye, 35% or even more is taken by the EU nations and only between three and four … or five percent, according to our Agriculture Ministry … goes to the poorer nations,” Putin said.
https://www.rt.com/russia/565698-putin-grain-deal-suspension/
​'Trusting and Verifying"​
Posted by John Day at 2:37 PM