​  This caught my eye this morning, and it has to lead. It's like "When it is important, you have to lie".​
This is an urgent call to arms from the top of the EU hierarchy.​
"This is a perfect storm," exclaims European Commission Vice President Josep Borrell in his opening speech to EU Ambassadors this week.​..​
​...​Communication is our battlefield: we fight in communication.​
​
We provide you with materials and I have the feeling that you do not transmit the message strongly enough.
​  ​I need my delegations to step up on social media, on TV, in debates.
Retweet our messages, our [European] External Action Service materials. Certainly, my blog, which is the everyday “consigna”...
​  ​I need you to be much more engaged in this battle of narratives.
It is not something secondary. It is not just winning the wars by sending tanks, missiles, and troops.
​                      ​It is a big battle: who is going to win the spirits and the souls of people?
https://www.zerohedge.com/geopolitical/perfect-storm-eu-leader-warns-black-swans-everywhere-says-propaganda-our-battlefield
​  ​From the man who just said that ​'​propaganda​'​ is more primary than tanks, missiles and troops.​  (It's like Epimenides' Paradox in a way.)​
​  ​EU Warns West Will ‘Annihilate’ Russian Army If Moscow Uses Nukes​
​EU foreign policy chief Josep Borrell issued a threat against Russia on Thursday, warning that Western powers would “annihilate” the Russian army if Moscow uses nuclear weapons in Ukraine.
​  ​“Putin is saying he is not bluffing. Well, he cannot afford bluffing, and it has to be clear that the people supporting Ukraine and the European Union and the Member States, and the United States and NATO are not bluffing neither,” Borrel said at a European Diplomatic Academy event in Bruges, Belgium.
(​What kind of attack could this be? Chemical? Biological? Propaganda?)
“Any nuclear attack against Ukraine will create an answer, not a nuclear answer but such a powerful answer from the military side that the Russian Army will be annihilated,” he added.
​https://news.antiwar.com/2022/10/13/eu-warns-west-will-annihilate-russian-army-if-moscow-uses-nukes/
​US Nuclear Armageddon Survival Map ​ (We should hope to be in Yoakum, not Austin, and hope that the winds are favorable.)
https://www.zerohedge.com/geopolitical/best-and-worst-places-survive-nuclear-apocalypse-us 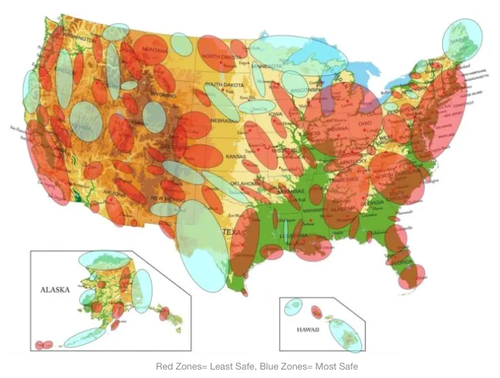 This is worth a close read. It lays out the specifics of Modern Propaganda War as carried out in the USA, on the COVID-19 Vaccination battlefield.
We are the pawns. We are dying. Know Your Enemy.
Scott Gottlieb Responds To Alex Berenson Claims Of Twitter Censorship Influence
https://www.zerohedge.com/political/pfizer-board-member-scott-gottlieb-secretly-pressed-twitter-censor-alex-berenson
​From yesterday morning. Video interview.​ View from inside the "housing project" on my end.
‘Good Morning CHD’ Episode 154: Meryl Nass Update With John Day, M.D.
https://live.childrenshealthdefense.org/shows/good-morning-chd/oP3pZGapbn
​Jessica Rose Ph.D. ​
Pfizer’s president of international developed markets, Janine Small, admitted that its vaccine had never been tested before its release to the general public on its ability to prevent the transmission of COVID...
​  ​The bird-chatter mantra ‘do what’s best for others/protect others - GET INJECTED’ - was a farce.​    (Point of order: A "farce" is funny, right?)
https://jessicar.substack.com/p/to-be-clear-this-is-not-going-to
​The latest explanation from truth-warrior, Spartacus​. This was biowarfare from the outset. Still is...
Humans as Bioreactors
How DARPA and Moderna pioneered the idea behind mRNA vaccines
https://iceni.substack.com/p/humans-as-bioreactors
Pepe Escobar on the ultimate loss of global prestige and fear/respect by US/NATO global enforcers...
The thin red line: NATO can’t afford to lose Kabul and Kiev
http://thesaker.is/the-thin-red-line-nato-cant-afford-to-lose-kabul-and-kiev/
Spirit​ of Freedom
Posted by John Day at 10:46 AM