​..I have no doubt that U.S. strategists have a game plan for how to proceed from here, and to do so that indeed is in what the neocons claim to be in the U.S. interest – that of maintaining a unipolar neoliberalized and financialized global economy for as long as they can.
They have long had a plan for countries that are unable to their foreign debts. The IMF will lend them the money, conditional upon the debtor country raising the foreign exchange to repay the (increasingly expensive) dollar loans by privatizing what remains of their public domain, natural-resource patrimony and other assets, mainly to U.S. financial investors and their allies.
Will it work? Or will debtor countries band together and work out ways to restore the seemingly lost world of affordable oil and gas prices, fertilizer prices, grain and other food prices, and metals or raw materials supplied by Russia, China and their allied Eurasian neighbors?
That is the next great worry for U.S. global strategists. It seems less easy to solve than was done by the sabotage of Nord Stream 1 and 2. But the solution seems to be the usual U.S. approach: something military in nature...
..Unless an institutional alternative is created to the IMF, World Bank, International Court, World Trade Organization and the numerous UN agencies now biased by U.S. diplomats and their proxies, the coming decades will see the U.S. economic strategy of financial and military dominance unfold as Washington has planned.   https://www.nakedcapitalism.com/2022/09/michael-hudson-on-the-euro-without-germany.html

John Helmer October Surprise : Ask not what the Kremlin will do, but what the US will do next. ​ (Feirly detailed, but here's the closing summation)  ..​The count reveals that US voters do not want to risk the direction of their country if the Biden Administration and the Kremlin open war on US territory. A false-flag operation, to be approved in secret by the National Security Council, for sabotage of US gas pipelines, power grids, or nuclear reactors, portrayed to voters as a Russian retaliatory strike, would run a bigger risk than any October Surprise in American election history.​  ​http://johnhelmer.net/the-october-surprise-ask-not-what-the-kremlin-will-do-but-what-the-us-will-do-next/

​  This particular risk arises in a "unipolar world" or a "multipolar world", whenever there is enough digital infrastructure to enforce a CBDC (central bank digital currency)   ​  A​doption of CBDC in a cashless society, where no other form of payment is “permitted,” enslaves every citizen to the state. CBDC is both programmable money and a liability of the central banks. Not only does it always belong to the central bank, and never the user, it can be programmed to function as they see fit.​  ​https://off-guardian.org/2022/09/27/multipolar-world-order-part-2/

Jessica Rose Ph.D. looks at the genetic structure of the original SARS-CoV2 virus, bringing up something a lot of us were interested in, in early 2020, the copied functional sections of the AIDS virus, and also the Furin-cleavage-site, neither of which occurred before in any coronavirus, and which have specific weaponized functions. Jessica goes back to the original scientific paper, retracted by the authors without explanation, and adds more recent findings and explanation. It has been clear to me, as it was to Luc Montagnier MD, who was awarded a Nobel Prize for discovering HIV, the AIDS virus, that this came from a lab.​       ​https://jessicar.substack.com/p/it-turns-out-that-the-prrarsv-motif
Penniless Vegetable Gardener (showing picture of wife, Jenny with pear-blossom this morning) 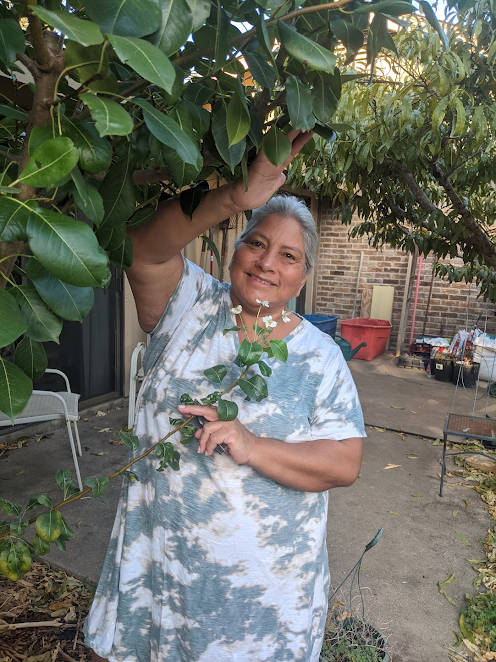