NATO Planned a Pre-emptive Strike On Russia
​..​One of the largest French maritime exercises in the Mediterranean, POLARIS 21 (Préparation Opérationnelle en Lutte Aéromaritime, Résilience, Innovation et Supériorité), took place from November 18 to December 3, 2021 in the area west of the island of Corsica, between France and Spain. The exercise also included a segment on the Atlantic coast of mainland France.​..​
​..​Journalists came into possession of data related to the exercise POLARIS 2021. The data speak clearly about the advance preparation of the NATO to enter into an armed conflict with the Russian Federation in the event of Russia’s intervention in Ukraine.  According to the legend of the maneuvers, it was determined that in response to the alleged Russian intervention, the forces of the NATO coalition would form and send an aircraft carrier strike group led by the Charles de Gaulle aircraft carrier to the combat area in order to “stop the invasion and preserve the sovereignty of Ukraine.”  The context and scenario of the “exercise“ (the consonance of the names of countries, settlements, the names of political figures, the specifics of maneuvers, etc.) became for the Russian Federation a signal of the real preparation of NATO to the start of hostilities against Russia, as it happened similarly to the operation of the United Defender alliance grouping of forces before the intervention in Libya (the exercises Baltops-2010 and Frisian Flag-2010), when, after the maneuvers at the sea ranges, a full-scale operation followed to overthrow of the legitimate government of Muammar Gaddafi.
​  ​POLARIS 2021 was also a demonstration of NATO support to Kyiv in the event of an armed conflict with Russia and was supposed to push Kyiv to start hostilities with the Russian Federation, after which the intervention of the NATO was supposed. In principle, NATO was looking for an excuse to attack Russia, with the factor of surprise, so that Russia would not be ready for an adequate response.
http://thesaker.is/nato-planned-a-pre-emptive-strike-on-russia/
​  ​Biden "Actively Pushing Us To Brink Of A Nuclear Holocaust": Tulsi Gabbard​,​ In Tucker Interview​    4 minutes of clarity
https://www.zerohedge.com/political/biden-actively-pushing-us-brink-nuclear-holocaust-tulsi-gabbard-goes-fox-interview
​  Tulsi Gabbard on Joe Rogan, 15 minutes about the Military Industrial Complex taking the American people to the brink of nuclear war on the casual assumption that "Putin won't do it". (Putin is not the biggest danger for starting a nuclear war, is he?)​
"Shelter in Place" for nuclear attack upon in New York City public service video is shown. After putting your clothes in a plastic bag when you go inside, wait patiently until "Authorities tell you it is safe to go out".
Tulsi talks about her trip to Chernobyl, and the children's books still sitting at the desks, the deflated basketball on the floor, the poisoned apples on the trees...
Thanks Matt.     https://www.youtube.com/watch?v=rAfwpfUBw1M
Tulsi Gabbard just campaigned for a Republican candidate for US Senate, a retired Army General of like mind.  Still "independent".
​  ​Retired Army Gen. Don Bolduc, who won the Republican primary and is campaigning against Sen. Maggie Hassan (D-N.H.), confirmed in a statement Wednesday that Gabbard will be stumping for him.
​  ​“We don’t agree on every issue, but I am honored to have the support of Tulsi Gabbard who shares my view that the status quo is broken, and we need a change of direction,” Bolduc said in a statement.
"​Tulsi is a fellow change agent and independent-minded outsider willing to speak truth to power.”
​  ​Bolduc, notably, was endorsed by former President Donald Trump earlier this year.
https://www.zerohedge.com/political/tulsi-gabbard-stump-gop-candidate-day-after-leaving-democratic-party
​  ​Saudi Arabia unveils US oil demand​
​Riyadh said Washington sought to delay OPEC’s oil cut announcement for a month​.  (After November 8, 2022?)​
https://www.azerbaycan24.com/en/saudi-arabia-unveils-us-oil-demand/
​  The House of Saud has a lot of expenses in the country.  Moon of Alabama (Germany)
​  ​A month ago OPEC+ finally fired back by decreasing its output aim by 2 million barrels per day. To some of them a price of oil around $80 per barrel is simply a budget requirement:
​  ​The quiet understanding emerging from [Biden's] trip was that Saudi Arabia would increase its production by about 750,000 barrels a day, and that the United Arab Emirates would follow suit with an additional 500,000, pushing down gas prices and worsening President Vladimir V. Putin’s ability to fund a war that was stretching much longer — and with much higher casualties — than Mr. Biden had expected.
​  ​But the production increases were fleeting. While Saudi Arabia boosted production significantly in July and August, it backed away from their promise to sustain those levels over the rest of 2022. Its leaders, and all of OPEC, worried that the specter of global recession was driving prices down, from $120 a barrel over the summer to below $80. Below that level, they fear, budgets have to be cut and social stability is threatened. So the Saudis decided they had to act.
https://www.moonofalabama.org/2022/10/misguided-foreign-policies-against-russia-and-others-damage-the-us-and-its-allies.html#more
​  ​Putin Claims Russia Could Send Natural Gas To Europe Via Nord Stream 2​
​Russia is ready to supply gas to Europe on the one undamaged line on the Nord Stream 2 pipeline if the EU wants to start the route, Russian President Vladimir Putin said at an energy forum in Russia on Wednesday.
https://oilprice.com/Latest-Energy-News/World-News/Putin-Claims-Russia-Could-Send-Natural-Gas-To-Europe-Via-Nord-Stream-2.html
​Charles Hugh Smith, Everything's Fixed, Except What's Broken​
Everything's fixed except what's no longer profitable to plunder. Underfunded, ignored, mismanaged by incompetents, it breaks.
​  ​Everything's fixed means it's been "fixed" like a game or match has been fixed--rigged to benefit insiders while the unwary onlookers and punters have been led to believe that it's "fair and open." That con job is the critical cover to cloak the fix/rigging.
​  ​If a market or regulatory system can't be rigged to benefit insiders, then it's broken because if it isn't profitable for insiders, it's neglected until it breaks.
http://charleshughsmith.blogspot.com/2022/10/everythings-fixed-except-whats-broken.html
​Children's Health Defense TV , ​Good Morning CHD ​, ​ Every Day at 7:00a.m. PT, 9:00a.m. CT, 10:00a.m. ET​   {Today's episode is Meryl Nass MD interviewing John Day MD on location in the house he is building, since he was fired a year ago for COVID vaccine refusal. It will be available in the archive.)
https://live.childrenshealthdefense.org/shows/good-morning-chd
​Independent Thinker (pictured telling Tulsi Gabbard about hydroxychloroquine for COVID 3/2/2020) 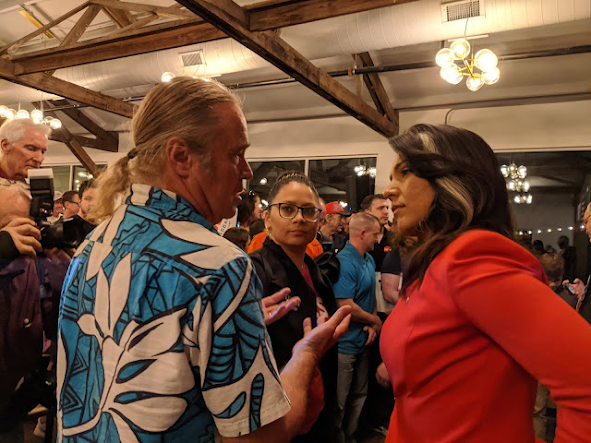