US-made "crisis" in Venezuela seems to be coming up short at street level. Meat is short, but there are beans, rice and vegetables.
CG: During blackouts, people told stories, played music, or went out and talked on the streets. It was a paradise, no TVs, smartphones, but real human contact. People cook together. During the day they’re playing board games, dominoes, and kids are having fun. People with kids are possibly more stressed, especially if you live in a tower block, as if you’ve no electricity, you’ve no water. That is why the US hit the electricity grid as it means no water in Caracas – a city of 10 million people. Luckily there are wells with clean water around the city, so people queue up to get it.
PC: So there was a real discrepancy between the image you were given of Venezuela and the reality?
AG: Sure, there are queues for oil, but people are not dying of starvation and, as I said, poverty is no where near what it is like in Brazil. I wouldn’t say a harsh dictatorship, people were open, and criticized the government, and the US, but also Chavez and Maduro. The Partido Socialista Unido de Venezuela (PSUV) have admitted they had made bad economic decisions. I thought it would be more repressive, and it wasn’t. People were not fearful about speaking out. I think Venezuelans blame the Americans for the situation more than Maduro.

​I wonder what will come of this meeting. Trump should be able to quell any dissent, but won't get army boots in Venezuela from these guys.​
"President Donald J. Trump will welcome the leaders of the Commonwealth of The Bahamas, the Dominican Republic, the Republic of Haiti, Jamaica, and Saint Lucia on Friday, March 22, 2019, for a meeting at Mar-a-Lago," Sanders said on Tuesday. "The President looks forward to working with countries in the region to strengthen our security cooperation and counter China’s predatory economic practices. The President will use this meeting as an opportunity to thank these countries for their support for peace and democracy in Venezuela."
https://sputniknews.com/latam/201903201073384999-trump-discus-venezuela-caribbean-leaders/

​Analysis here favors Hard-Brexit, though others say Theresa May needs to revoke Article 50​ and stay in the EU. City of London bankers would not get hit hard in this analysis.
In conclusion the effect of a "hard Brexit" on Britain itself should be overwhelmingly positive, especially if Britain does in fact remove all tariffs and conclude free trade pacts with the rest of the world fairly quickly. Naturally my advice to Britain is to unilaterally remove all tariffs on all goods, including "sensitive industries." Free trade deals then become irrelevant. Britain could lead the way in showing the world the benefits of unilateral free trade, just as it did in the nineteenth century with the abolition of the Corn Laws. Perhaps this outcome is what the EU fears the most, because it would call into question the benefit of belonging to a closed customs union and would spell the end of the EU itself.
https://mises.org/wire/what-hard-brexit-could-mean-uk

​Charles Hugh Smith looks at what characteristics will help some societies and countries survive the global economic reset. Groups may get redefined smaller.​
By the time the populace awakens to the precariousness of the entire status quo, it will be too late to effect meaningful change via removing the parasitic elites from power. Just as Rome was too hollowed out to survive by the end, the status quo structures will be too enfeebled to adapt quickly enough to survive.
Centralization of wealth, power and control has been the "solution" for hundreds or even thousands of years. We're approaching Peak Centralization and the systemic failure of centralization as the "solution" to anything.
The only sustainable solution going forward is radical decentralization of capital, political power and control of resources. The parasitic elites rule solely because wealth and power are so highly concentrated in the hands of the few. As the financial and political systems unravel and fail, solutions that are completely outside these centralized hierarchies will arise--if the populace is free to embrace them.
Solutions will obsolete the existing centralized financial and political structures. Reforms will all fail, as the parasitic elites will never relinquish their control or power. The "solution" will be the total collapse of the centralized financial and political structures and the parasitic elites that control them.
Adaptability and flexibility will be the core survival traits going forward. The only structures adaptable and flexible enough to respond quickly and effectively enough to survive are decentralized networks-- non-hierarchical, distributed rather than centralized, self-organizing rather than top-down.
https://www.oftwominds.com/blogmar19/nations-crumble3-19.html

In the first significant check on the Trump administration’s “energy-first” agenda, a US judge has temporarily halted hundreds of drilling projects for failing to take climate change into account.
Drilling had been stalled on more than 300,000 acres of public land in Wyoming after it was ruled the Trump administration violated environmental laws by failing to consider greenhouse gas emissions. The federal judge has ordered the Bureau of Land Management (BLM), which manages US public lands and issues leases to the energy industry, to redo its analysis.

​OK, why does North America keep being cooler than the rest of the planet, compared to historical averages? Could it be those chemtrails in our skies?
https://rense.com/general96/yet-again-the-us-is-kept-strangely-cooler-than-the-rest-of-the-planet.php 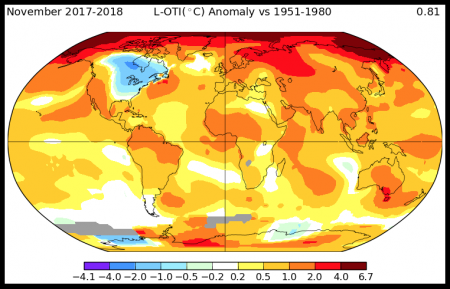 ​I'm not sure why we have not seen more about this story.
A lot of us have been watching Mt. Popocatepetl for a very long time.  Could it be possible that we are now on the verge of the most destructive volcanic eruption in the modern history of North America?  On Monday night at precisely 9:38 PM, a massive explosion at Mt. Popocatepetl sent a column of volcanic ash nearly a mile into the sky.  A “yellow alert warning” has been issued by the authorities, and they are ordering everyone to stay at least 12 kilometers away from the crater.  They are stressing that the threat has not passed, and as you will see below, an evacuation plan is in place in case an even larger eruption follows.  And if a much larger eruption does follow, the devastation could be off the charts.  Mexico City is only 43 miles away from Mt. Popocatepetl, and approximately 25 million people live within a 60 mile radius of the crater.
http://endoftheamericandream.com/archives/its-happening-the-most-dangerous-volcano-in-north-america-just-erupted-and-shot-ash-nearly-a-mile-into-the-sky

​Rigging the trial into 2 parts was supposed to protect Monsanto. Oops, too much damning evidence. The floodgates will open.
All the dirty dealings will come out in phase 2 , then comes the awarding of damages.
What I read lately is that glyphosate in RoundUp is actually an antibiotic that also has herbicidal features. It is sterilizing the soils.​
In the first phase of Edward Hardeman v. Monsanto Company, the jury sided with arguments and scientific evidence presented by the attorneys for Edward Hardeman that glyphosate was the cause of his non-Hodgkin lymphoma.
“Today’s verdict reinforces what another jury found last year, and what scientists with the state of California and the World Health Organization have concluded: Glyphosate causes cancer in people,” said Cook. “As similar lawsuits mount, the evidence will grow that Roundup is not safe, and that the company has tried to cover it up.”
Bayer AG bought Monsanto last year for $63 billion and is now liable for claims against it. Bayer faces more than 11,000 U.S. lawsuits alleging that glyphosate causes cancer.
Now the case before the federal district court in San Francisco will enter the second phase of the trial. Hardeman’s lawyers will present evidence to the jury, including internal Monsanto documents, that could show the company knew the dangers of Roundup and glyphosate and attempted to cover them up.
https://www.globalresearch.ca/verdict-roundup-trial-bayer-monsantos-glyphosate/5672108

​Lonely people die 15 years younger. Our societal business model makes us sick and sells us solutions that don't work.
Thanks to remarkable new technologies and the widespread use of social media, we are more “connected” than ever before. Yet as a nation, we are also more lonely. In fact, a recent study found that a staggering 47 percent of Americans often feel alone, left out and lacking meaningful connection with others. This is true for all ages, from teenagers to older adults.
The number of people who perceive themselves to be alone, isolated or distant from others has reached epidemic levels both in the United States and in other parts of the world.
https://blogs.scientificamerican.com/observations/loneliness-is-harmful-to-our-nations-health/